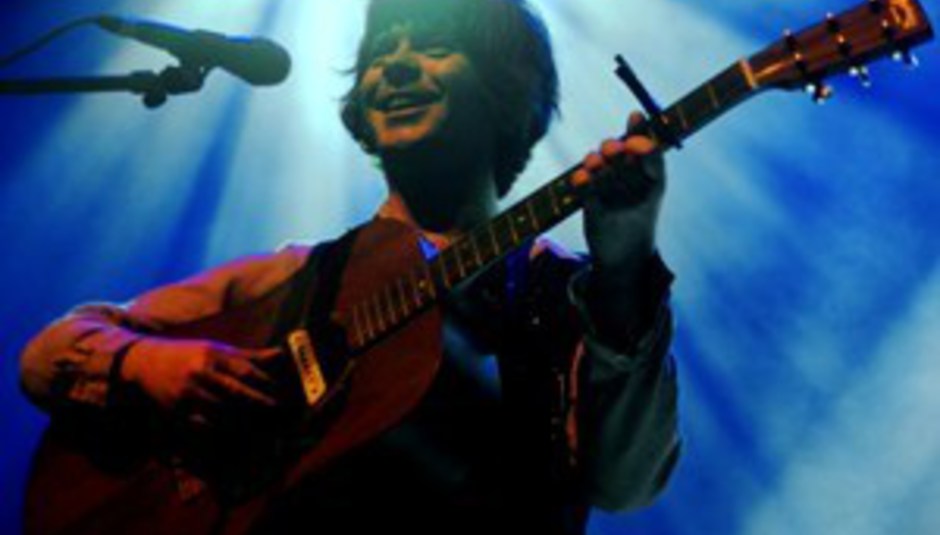 Bella Union is a label synonymous with quality, and the bill they compile to celebrate their tenth anniversary – split over two nights at London’s Royal Festival Hall – is brilliantly representative of the variety abundant on its roster. Here, a sweet-toned chanteuse rubs proverbial shoulders with hairy Texan troubadours, and a Mercury-nominated Irish smooth-talker tickles the fancy of those in for a troupe of Danes plying a fine line in epic pop-rock.

The first night finds DiS running late, but we’re assured Beach House are excellent; certainly, the Baltimore-based duo’s self-titled debut album, due out next month, is quite a delight. They’re followed on the huge stage by the rather-more-able-to-fill-it My Latest Novel. The Scottish five-piece’s lovingly rendered indie-folk, peppered with huge swells of sound that edge towards being muscular enough to lift this expansive venue’s roof clean off, surges it way to the cheap seats with masterfully controlled power and precision. Nothing’s cluttered nor overly busy, despite the potential for a rather too scrambled mix when choice cuts from their Wolves album are presented in this live environment. It all sounds quite special, actually, with its creators surely worth a higher billing. Then again…

Fionn Regan’s set proves to be completely arresting. When he’s playing with his very straightest face set tight, plucking at his acoustic with a tenderness rare in men young of age and short on patience, he’s captivating for the ‘right’ reasons. The songs are carefully pieced together, the backing percussion subtle and a worthy embellishment on efforts like ‘The Underwood Typewriter’. But it’s when Regan strikes out solo that the fun begins: ‘Be Good Or Be Gone’ finds the singer unplugging his acoustic and wobbling his way to the very edge of the stage and screaming at those seated before him to join him in a sing-along. He succeeds, too, quite against the odds, as there’s something very peculiar about seated shows like this – they rather strip the energy from you. Despite the questions of whether or not he’s absolutely blasted out of his mind on booze or not, and if he’s actually having fun, Regan proves without any doubt why his The End Of History album received the nod from the Mercury panel this year. It’s a great folk record, and one that will serve as a great base for a brilliant career to blossom from.

The first day’s festivities are brought to a climax by Australian indie-rockers Howling Bells. They, too, struggle to muster much in the way of enthusiasm for an audience that has to be coerced into climbing over empty seats and filling the first few rows, but nevertheless deliver a professional set. With only one album to draw material from, the Juanita Stein-fronted four-piece add a predictable (maybe) but pleasant cover to their set. Joined by Tom Smith of Midlands gloomsters Editors, Stein duets her way through Nick and Kylie’s ‘Where The Wild Roses Grow’. It’s not bad, either, but would last longer in the memory if Smith hadn’t attempted to mimic Mr Cave’s unique tones. Out of their depth slightly though they are, upgraded to headliners only due to the absence of Explosions In The Sky, Howling Bells put up their dukes and rise to the occasion respectfully. One day, perhaps, they’ll be able to play such venues on their own headline tours.

Day two is opened by one of Bella Union’s newest signings Stephanie Dosen, whose southern (American) drawl inflects her wonderful voice with character enough to see her rise above the ranks of her singer-songwriter peers. While her songs can be best summarised as pleasant rather than essential listening at the meantime, there’s lots of potential here; as tracks from her A Lily For The Spectre album drift into the Festival Hall’s auditorium, they sink slowly and leave a mild but lingering impression. Like the most gentle, barely there snow, there’s a beauty to her work that will ultimately build into something substantial, something that won’t vanish at the first sign of a sunbeam.

The Kissaway Trail, mistakenly introduced by the compere for the night as ‘The Faraway Trail’, bring a healthy dose of bluster and bombast to proceedings, with songs from their self-titled debut of earlier this year actually hurting the hearing on more than one occasion. And hell, why not: this is a party, and no party’s right without the odd pop and fizz and bang. Like Dosen, the five-piece aren’t the finished article just yet – as reviews of their album testify, they’re perfectly adept at their chosen profession but still rely rather heavily on identifiable influences rather than unique inspiration – but as songs like ‘61’ and ‘Smother + Evil = Hurt’ threaten to blow the back wall into the Thames, all in attendance are suitably impressed with the quintet’s widescreen approach to indie-rock songwriting. Once they allow a few of their own experiences to soak into their rehearsal space they’ll have a potent recipe to wow even the most cynical critic.

And now for some honesty: this writer has never really ‘got’ The Dears. Sporadically gorgeous though the Canadian collective undoubtedly are, their albums to date haven’t yet infiltrated our favourites at DiS. Also, live, they tread a fine line between wonderful indie-pop a la Built To Spill and crappy, wet-behind-the-ears pop schlock like Keane and The Feeling. Sorry, The Dears: maybe one day, perhaps sooner rather than later, we’ll connect and all indifference will be forgotten. Tonight, though, The Dears simply fill an otherwise silent Festival Hall ahead of the night’s headliners, Midlake. Whose vocalist Tim Smith is in fine lyric-forgetting form. He’s apologetic, but such is the room’s shouted-out adoration for the Texan four-piece that he needn’t worry about a couple of minor blips. Besides, the odd slice of the ramshackle only endears the group further to our hearts, a considerable achievement following the highly impressive The Trials Of Von Occupanther album they released last year, their second long-player following 2004’s Bamnam & Silvercork. Like Howling Bells 24 hours earlier, Midlake are joined by a selection of guests. Romeo of The Magic Numbers does something or other during a run-through of ‘Roscoe’ (is he turned down, or even turned on?), and Paul Weller appears towards the set’s end to rapturous applause. The centre of attention, though, remains Midlake: their star, unlike that of Weller, is absolutely in the ascendancy, and with the fine fellows of Bella Union on their side, it’s only a matter of time before the match reaches the columns of heaven.

Here’s to another ten years, then, and many more excellent albums and artists from across the musical spectrum.