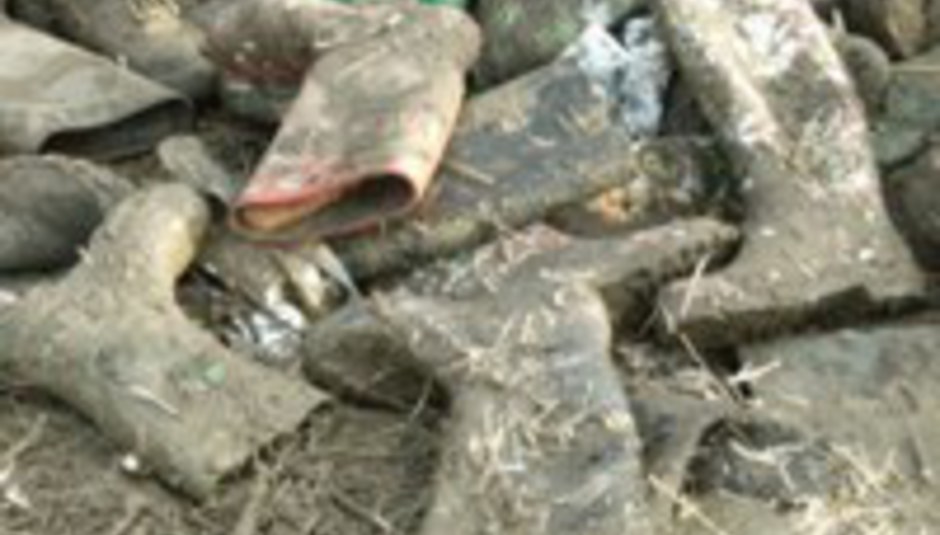 Sunday mornings are never a good time for anyone but vicars, but get this: this is hellish. I've the shakes from three days 'n' nights of booze, it sounds like someone's pissing from a great height onto my canvas, and about two tents away some guy is throwing up outta his porch. Or into his sleeping bag. How am I to know?

Define hell: hell is the stench of working man's pub-rock without an escape. Hell is busting your sunglasses whilst sitting up looking for ear plugs. Hell is wondering whether a handful of mud will fill both ear holes and nearly being still drunk enough to try.

Casualties wander in three inches of rain and two slushy inches of chocolate-gravy/mud. The sound is something medieval. I look at my notes from last night which read simply "waarggh-woo-oh-ooooh" and "clatter-clatter, splatter, patter-patter… jerks in the grey skies, their skulls made of tofu and favourite bands for some are cultural atrocities for others…". I decide it's time to escape my tent and run from whatever these scribbles might mean. Walking past tents, it's all men munching apples with self-disgust, disregarding the pips with a swaggersome spit, wishing they were Liam. It's all hoods up and eyebrows arching over sunglasses. A girl keeps her sunglasses on as the sky’s bowels exhale. Moments later the colour begins to wash off the frames and pour down her cheeks like mascara tears. The DJ in the breakfast bar plays Midlake’s 'Roscoe' and Battles’ 'Atlas' and suddenly I know it's all going to be okay. Anyway, enough dancing: bands o'clock...

It's testament to how bad the Sunday line-up is that I'm led along to see Cold War Kids. COLD WAR KIDS? What am I letting myself in for? I mean, I could be watching Billy Bragg and some prisoners, followed by a thoroughly depressing speech from Tony Benn... Anyway, this lot are into some religious cult thing, Mormons or something, and they make radio anthems, so anthemic that as I wander closer it seems everyone, even cool-looking girls in floral summer dresses, are dancing in that Chili Peppers crowd constipated kinda way. Musically they aren’t a million miles from Orson either, with their thin Hollywood sentimentality and musically, which is the perfect triangulation between Killers, sub-Prince-type-bands-like-Scissor-Sisters and Maroon 5. The songs have nice narratives about drunks and mud, which change subtly, but the songs start at epic, subsequently leaving them nowhere to go. The way they're so over-performed beats away any kind of subtly. You can bet this looks and sounds so much better on TV, and that Anastasia-loving soccer moms crank it this up in their on-road SUVs. CWK play keyboards and have huge stadium pauses, so let’s leave it to the rest of the press to make them into the next Coldplay. You've been warned.

It's be impossible to avoid Sam Duckworth (aka Get Cape. Wear Cape. Fly.) this weekend, as he's playing something like fifteen different shows, but Sunday afternoon is the big one for Operation: Vote Emo!. A friend of mine walks away as I head toward the stage, saying that Get Cape will be "patronising ska-punk politik in war-like mud. Fuck that. I'm driving home and listening to Dashboard Confessional. Want a lift?" I decline. That's a hard hump of negativity to get over, but Sam don't know and don't care that he's earnest and passionate, so what? Today he's even out of a band shirt and is dressed in a suit, skipping around the stage backed with something about how farmers get ripped off when making you a latte. He jumps about, filling every inch of space, trying to lift the weight of the world and let people see what's really going on beneath the rock. People are sing-along-ing to every word, shaking their muddied mops of hair. Bashing around beach balls and singing bedroom anthems, closing their eyes as the brass breezes in. It's a surprisingly competent and professional set which sits perfectly in Glastonbury's Captain Planet-shaped ethical-party groove. It dawns on me, as the set comes to a close, that if I were 16 now I'd wanna be Get Cape when I grow up. Top marks.

An epic trudge with a bit of getting lost later and I'm stood before the Jazz World Stage, all jittery and excited because I haven't stopped obsessing over Gulag Orkestar since I first heard it. I look for everyone I know who should be here, as I plunder my way to the front for what could well be the set which rises above the rest of my weekend. No pressure Beirut, no pressure... On they waltz, lots of people with lots of instruments more commonly used by pirates and blind ladies – there’s even a young boy with shakers. Within moments the brass becomes elephants and the Persian Sea chanties take me elsewhere, wrapping my imagination in a magic carpet, spinning me into star-spangled fairground rides and other such stuff too pretentious to commit to the page. By the time 'Postcards from Italy' jostles to the fore I'm swirling to Bavarian balladry with hippy girls caped in face paint, singing imagined backing vocals and getting myself lost in an eastern spiritual euphoria. SRSLY! This was beyond words. Something really special, beyond anticipation happened. When their voices can't shout for more, people leave jerking their heads, mock belly dancing, humming "doo-dooh-doooh-di-di-dooh dah-dah-daah-da-ah-da-daaaah" and spreading their arms camply, singing "...the daaay was miiine..."

Another march across site, this time into an utterly rammed John Peel Tent. The crowd warm up their chords by screaming along to Status Quo. They’re warming up for one of their own, another kid who had Marley for roadtrips and The Specials in headphones whilst doing homework. These are teens who’ve grown up, who skanked to fuzzy stereos on beaches or in parks at twilight. The assembled includes boys with lager breath who met ladettes in old man pubs blasting out Fat Boy Slim, Coolio and Oasis. These are girls who’ve dreaded their hair and chopped their jeans into short-shorts. Jamie T’s read Dear Deidre and turned off reality TV in disgust, like the rest of us. The sense of unity in the tent is profound, as everyone sings along to Queen: whether they own the records or have seen Wayne’s World too many times, it really doesn't matter. This is our last chance to really 'av it for the weekend, and as Jamie takes the stage the roaring reaction is mental, in the most amazing way, and he stutters and then blasts into the album opener 'Brand New Bass Guitar' before rocketing through what already feels like a greatest hits set, complete with his cover of Billy Bragg's 'New England'. Every track gets the same emphatic reaction. Jamie drops the band right down to let the crowd a cappella at an astounding volume on more than a few occasions. "We wanted Mister Motivator to come dance to this one, but he cost 15 grand!" But oh, who cares: this is def’ntly all for you!

This show hits me really personally – I can't believe that is the same guy I shared spliffs with on the pavement three summers ago. The Stella-sippin' kid talking about Rancid and Billie Holiday, at length, after another indie band had come and gone at London's infamous White Heat club. He’s knocking our socks off and enjoying every moment like this show is all part of his journey home for the last summer party, stealing bottles of milk as he goes. He's every inch the anti-hero up there, echoing and commenting on the world of those stood before him.

'Sheila' is a fucken punk rocker tonight. The scream of…

…bursts like nuclear warheads in a giant microwave, sonic-booming through valleys and going up gorges 'til the screams reach the Thames in one raucous fuck-off tsunami of love! The crowd is THAT loud. Approximately. Next stop? Album two does the do and he's headlining! At least the Other Stage. It ain’t impossible.

I wander past The Who but that's it: I've had enough-is-enough and I don't want anything but Jamie T to end my festival. Before the final full stop there's the little matter of consuming the contents of my sodden tent and working out how I'm getting home... Job done. Welcome back Glastonbury: we missed you and your muddy good times.