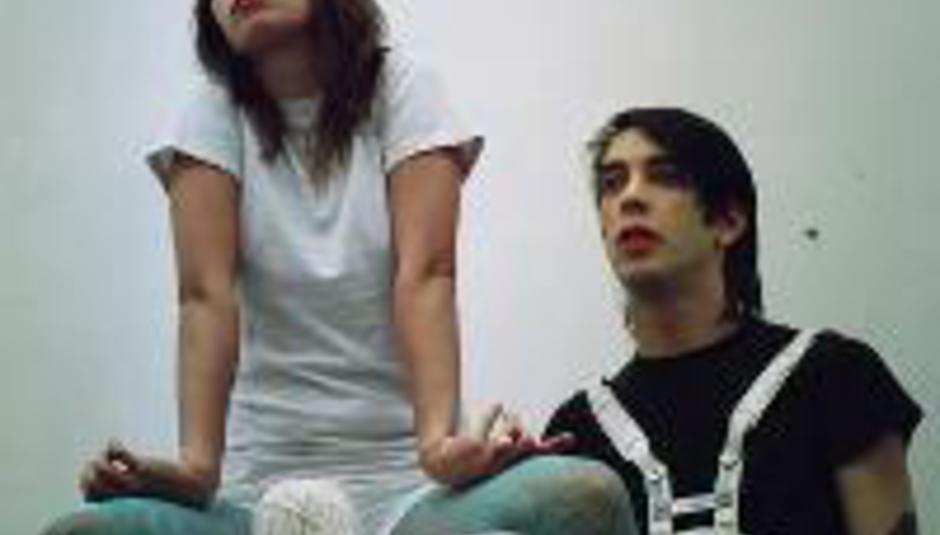 Parading without the Wolf: Handsome Furs discuss their Plague Park

Parading without the Wolf: Handsome Furs discuss their Plague Park

I’ve never been to Montréal, but I’ve been thinking that there must be a reason for why there is all this terrific music coming out of the place. After all the buzz surrounding Wolf Parade, and Sunset Rubdown, and Frog Eyes, and Swan Lake, and their explorations into ugliness and prettiness at once, it seems hard to figure that these sounds could be furthered or, at least, pushed in a different directions. But then along come Handsome Furs.

The band is a duo: Dan Broekner, also of Wolf Parade, and Alexie Ferris. There are many gimmicks for us music writer types to latch onto: the pair are soon to be married; they’re young, hip and handsome; Perry is a writer of poetry and short stories; they’ve got a rad drum machine and a bank of synthesizers. This is, really, quite a different experience to Wolf Parade, and if Handsome Furs do sound like the crafters of 2005’s Apologies To The Queen Mary (expect a follow-up early next year), I’d suggest it’s only Dan’s voice that offers a parallel. That aside, the two projects are very different, as he says:

“We wanted to strip the songs down to their component parts: rhythm and melodies, and then a counter melody with singing. The drum machine came about mainly through needing to be resourceful – we wanted to keep the band just the two of us and occasionally add another member. We consciously decided not to have a regular band set-up, so we could pack it up and take it anywhere. So the writing process was a little simpler, too: we could just do it from home. We didn’t really know what we were doing; I bought this sampler at first and I had no idea how to use it, so I returned it and bought this mid-‘90s drum machine that's basically for making rave music. You look at the presets on this thing and it's basically got, like, Gabba and stuff like that [laughs]. It's weird; over here in Montréal we missed a lot of that stuff, the sub-genres of dance music.

“We knew that the pre-programmed nature of the drum machine meant that it would sort of lock a song in – every time we played them, there would be that core part staying the same. We wanted to keep the other elements a little more random. So, when we recorded, I had the chords down and a few lead melody lines down but, other than that, we wanted them to be able to change all the time. It didn’t get boring that way, and added contrast to this merciless drum machine.”

It’s terrific how well this minimalism works. It’s not too far out to talk about dance music in terms of Plague Park’s sound. It’s certainly a long way from Gabba, but some of the intensity conjured through the shiny drum machine beats and synths is really driving. I’d always thought the best parts of Wolf Parade and Sunset Rubdown to be the build-ups, the verses that require some endurance but then blam: the chorus, and everything melts. ‘Handsome Furs Hate This City’, track three of nine, is all about the build-up and the repetitious beats; it gets denser and denser as it plays through and I can only try to imagine how this would sound live.

“When we play live now, we've refined it quite a bit. We just played this show in Montreal and we just kind of worked out this weird Jesus and Mary Chain sort of thing, where the songs are quite stripped down but there's this insanely loud guitar. It’s fairly punishingly loud, I think. But I kind of like it that way.

“I've always liked the hooky sort of chorus – The Clash had that a lot. That's something I always wanted to do with music, having verses that are these rapid-fire sort of propulsive sort of things and then the chorus is like a release from that.”

Elsewhere, on ‘Dead + Rural’, the duo’s debut album collapses into a deluge of synths. It’s their rave anthem, pure ecstasy with a pop sensibility at the forefront. Pop music is more appropriate a link than dance: the drum machine and synths, and the generally slick production, of Plague Park doesn’t quite equal Top 40 material, but it’s got a dark sort of shimmer to it. There are beats, even some handclaps; it’s upbeat in a strange, beguiling way.

“I do listen to quite a bit of pop music, not much contemporary stuff apart from some hip-hop and dancehall stuff. I don't really listen to great new pop songs, but I do listen to lots of ‘60s and ‘70s pop stuff, like Wings or Fleetwood Mac. It seems like everyone around me right now is heavily into Fleetwood Mac – it’s become this obsession with a lot of my friends who play music. There's this renewed interest in what they were doing. Some of it you could really take as a prototype kind of bedroom recordings – there’s this really weird production on their third record, Husk. You can pretty much hear the cocaine.”

Those aforementioned fellow Montréal-based bands (scroll back up, if you must) all mine an aesthetic where you’ve got to sift through a swampy and ugly top layer to reveal a rich and beautiful landscape of peaks. Songs crumble when choruses kick in, and it’s riotous, well worth it. There are similar song structures evident in Handsome Fur’s material; it, too, is tremendously rewarding.

“Pretty much all of my favourite songs, well, especially when I first started getting into music that wasn't metal – I pretty much only listened to that music for a long time – is like that. I got into bands like Sonic Youth, and post-punk stuff where they'd have these beautiful melodies, but then there'd be stuff that was slightly off about it, or it'd be mixed with noise. I always found that the most interesting songs, or the songs that moved me the most, were pop songs with noise around them, or something that was slightly off-kilter.”

Montréal is a long way from Finland, but there are some strange similarities between Handsome Furs and dark folk music like Islaja, a band who they’ve toured with and, in the process, have been enamored and influenced by.

“Islaja has influenced us so much. We went over to Finland and played shows with them before we really had what we were doing styled properly. She opened for us and it was totally amazing; her influence extended to the actual recording of the album, and the way we structured the songs. One of the amazing things about Finland is that they have this totally isolated music tradition without a lot of western influence. I mean, some bands do embrace western styles, but there’s bands like Islaja and Paavoharju who take these weird folk traditions and bow them into something new. There are a couple of Australian bands that have influenced me, too: X really influenced me in a big way, and The Triffids as well, and Beasts of Bourbon. Kind of like AC/DC, filtered through punk.”

It’s a nifty sound, and one that’s always triumphant, even if it takes the longer routes to get there. I like it that way. It’s gratifying, engaging, and on Plague Park Handsome Furs have proved that these directions are well and truly worth venturing in.

Handsome Furs’ Plague Park is out now on Sub Pop. Click to their MySpace page, here, for further information. The pair currently have no live dates planned, but do check their site for updates.