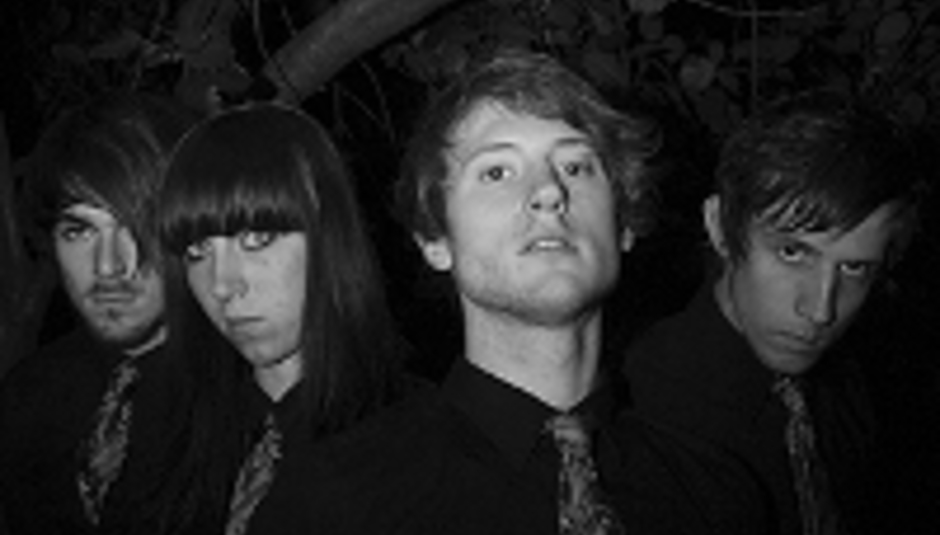 There’s a bit in the video for the new Mother Vulpine single where you know this is a band that means business. A corpulent butcher is inexplicably being pursued by a wolf through a wood, and as he stops to catch his breath against a tree, a hand reaches from behind and grabs him by the shoulder. Head Vulpine Matt Bigland appears all clad in black, dishing out some stern advice and giving him a good kicking in the process. Then the rest of the band appears ominously as a white-knuckle riff takes a jackhammer to your earlobes.

The song is ‘Keep Your Wits Sharp, Her Words Are Quick’, and it’s an irresistible mix of brains and brawn, aggression and seductiveness; a teeth-bared slab of gnashing heavy rock from four Leeds-dwelling kids who may or may not have lupine blood pumping through their veins.

Matt explains: “When we started the band I was looking a lot of storytelling, fairytales and that kind of stuff, and I was particularly into (celebrated author of twisted post-modern fairytales) Angela Carter. I wrote about a woman – Mother Vulpine – who falls in love with a man who has a wolf’s heart. On the marriage night he disappears and leaves her to deliver four children on her own, and that’s where the myth of the band takes hold really, it’s whether the kids are wolf-children or half-man, half-wolf.”

The uncertainty is abundantly clear in the video, with the band a brooding presence playing an ambiguous role in the butcher’s fate: “We kinda wanted the band to look pretty ominous,” says Matt. “I wanted it to be unclear who they were or what their intentions were, whether they’re helping the butcher or leading him to his gruesome end, or whether they’re the wolf.

Mother Vulpine have made great strides since DiS tipped them for great things at the beginning of 2007, recording their debut single with Justin Lockey from Yourcodenameis:milo and landing a UK tour support slot with the mighty Eagles Of Death Metal.

“The tour was cool,” says Matt. “We got it through a mixture of luck and just being a bit cheeky, their label asked us for some demos and we gave them tracks but we also asked if we could support Eagles because we knew they were playing in Leeds, and it was through that that we got the tour ‘cos the main support dropped out.

”We were a bit nervous about meeting them ‘cos with Eagles they’ve got this reputation, they sell themselves on being old-school rock stars. We were nervous about them being dicks to be honest, but they were super super nice people.

"It was funny ‘cos in one way they really did live up to their hard-living reputations. That sort of thing can be drenched in a certain arrogance or self-obsession, but we had conversations with the guys from Eagles about exactly that, and about them meeting their own heroes. They really liked our music which was wicked, the situation could have been quite awkward really, they could easily have not given a fuck about us.”

And how did the collaboration with Justin from Yourcodenameis:milo come about?

“We just sent some demos over to Justin, it was one of those things you giggle about really, but he got back to us the day after we sent it, he said he’d been listening to it all morning and couldn’t get it out of his head.”

“It helped that we have quite a definite idea of what we want to sound like... when we’re producing we’re pretty uptight ‘cos we know what we want, but it was cool ‘cos Justin’s really talented as a producer and he knows how to achieve a certain kind of heaviness and, y’know... balls, basically. He totally jumped on board and was really psyched about it, cranked the amps up and brought out loads of pedals.”

Some bands make concept albums, Mother Vulpine are a concept band – can Matt envisage reaching a point where their myth becomes a limiting factor on their music?

“I’ve thought about that a lot. In a way it’s an escape for us, it’s about us being able to get out of ourselves and be creative or lyrical or whatever.

“But in terms of it being limiting, I think that even though we’re interested in the artier side and creating an atmosphere or persona, at the end of the day we’re still a band, and we got into that from listening to dirty punk rock, we’re still rooted in that.

“But for what we want to achieve right now, it’s just really important to get that balance between intrigue and gutsiness.”

'Keep Your Wits Sharp...' is a good place to start. Check out the video here, copies of the single are avilable from the On The Bone Records website.