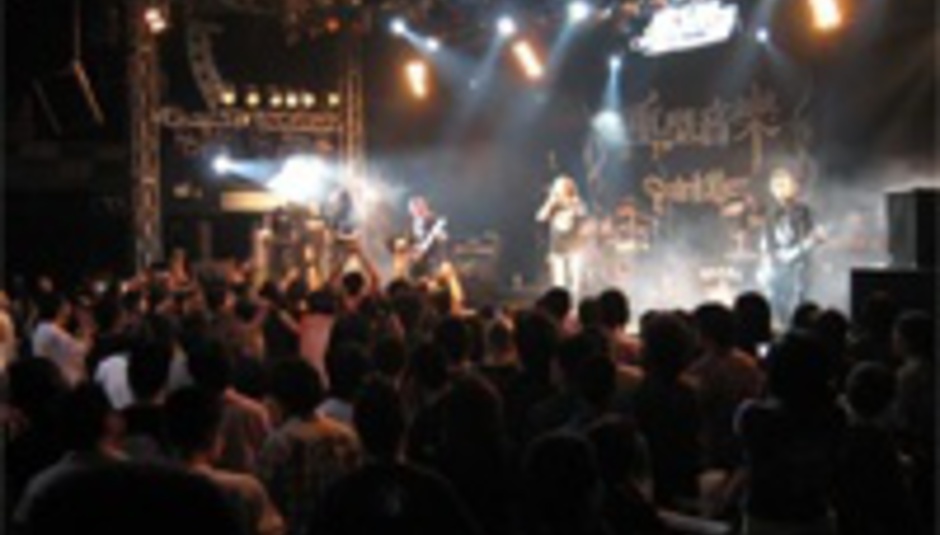 Just got back to the hotel after a crazy taxi ride. It seems like the traffic here is totally out of control.

We have been hanging out quit a bit with the boys from Rock Hard Power Spray these days. Nice guys who know how to throw a party.

I will turn back time to the 2nd of May, the day of our second show in Beijing:
We went to the venue, and end up waiting for the local crew to set up the gear. We meet up with El Caco, a very good band from Norway, also taking part in the show that night.

Communication is hard with the local crew, because of the language barrier, so everything takes longer. Mads, our sound guy , is about to lose it several times – which we, of course, find very funny.

The Painkiller and the Schecter guys, who are sponsoring the tour, are the coolest guys. They are really there for us when it is needed. Yang and Freddy (the baddest motherfucker in Beijing) speak English, so they can translate for us. We finish our soundcheck, and go eat with Yang and his girlfriend Wendy.

Then the trouble starts. There are two local support bands and then El Caco, before we go on stage. Right before the first band takes the stage, a guy from the Chinese Culture Department shows up, and tells the organizers that the show have to stop at 12. Not one minute later! Since everything is already delayed, we are fucked. If we are lucky we can play 25 minutes, which pretty much sucks.

There are long and loud discussions in Chinese, and we try to shorten down the playing time of the local supports and blah blah… The last Chinese support decides to keep on playing longer and all kind of shit happens.

The club is pretty much full now, and El Caco play a cool set. The Danish DJ duo Kasper Bjørke and Josephine Filip show up together with HipHopsters Ufo/Yepha and Rock Hard Power Spray. All are in a good drunken mood.

We go on stage and 600 people are going crazy! The first three songs are pure mayhem – amazing. After eight songs, Freddy comes to me and says that the Cultural Department guy has left the building, and we can play as long as we want. I was told later that the guy saw how much people was into us, and he was afraid that if we stopped playing too early, the crowd would go berserk. So we continue our set, and everything is cool.

All the Danish bands, Martin from ROSA and El Caco go out for dinner and drink through the night… which proves to be a good night!