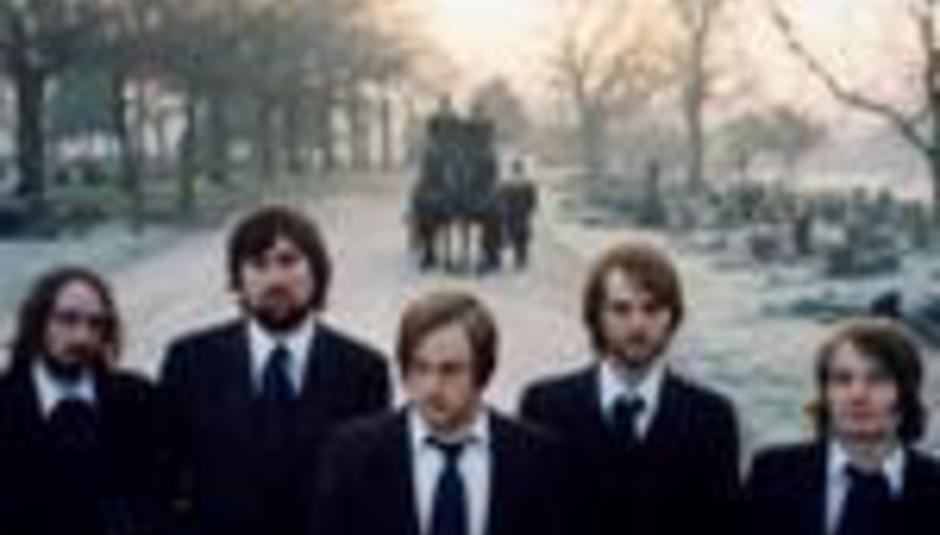 We’ve been keeping a keen eye on iLiKETRAiNS. We’ve thought that they’re one of the UK’s finest talents for some time now, and a lot of you have agreed with that. When they released their debut mini-album, Progress Reform, in 2006, we said it was “a breathtaking entrée to anyone not familiar with them” and said they were “possibly the most insightfully ambitious band doing the rounds”. Their latest release, ‘Spencer Perceval’, received a money-can’t-buy 10/10 t’other week – review here.

It sounds like disgraceful hyperbole thrust upon an emerging band that could never live up to such propaganda, but it’s actually true. If you don’t believe us, buy something and prepare to apologise as you get caught up in their gloriously massive swathes of post-rock symphony. Then, as you listen to the magical lyrics that take you back in time, you find that this rather helpful band is also teaching you history and stuff.

Ahead of The Camden Crawl, at which iLiKETRAiNS are due to perform, DiS caught up with the all-singing, all guitar-playing David Edward Martin and he duly answered Some Questions for us. What a thoroughly good egg.

If you could be drowned in anything, what would it be?
Gold.

What are your favourite websites?
Other than DiS, www.leedsmusicscene.net and www.nottscounty-mad.com.

Mac or PC?
I have a PC but would rather have a Mac because they don’t go wrong.

If you could make one already-written book as important and integral to Western society as the Bible, what would it be?
I can never really think much beyond the last book I read, but I think that people could learn quite a lot from it anyway. It’s called The New Great Game by Lutz Kleveman, all about the power struggle over oil in Central Asia. It illustrates pretty clearly how history constantly repeats itself.

Do you believe in a God?
No.

Have you had any near-death experiences?
Yes. Our old rickety van had a puncture at 70mph on a French motorway. There will be a song about it on our new album.

Who would play you in a film based upon your life?
Tom Selleck, I expect.

What is your favourite country?
I have a love-hate relationship with England, and an emotional attachment to Canada and Norway, but I’d go for India simply because you never know what to expect day to day.

Who is your favourite non-musical celebrity?
Alan Fletcher (Karl Kennedy from Neighbours), because he is a fine role model for a modern man.

What has been your most notable experience with fans and admirers?
Recently we had a girl come all the way from Japan to see us. I had no idea what to say. It was unclear who was more excited.

You spend so much time together, how do you stay friends?
Complex in-jokes. You wouldn’t understand.

What band do you wish your band were as good as?
So many: Sigur Rós, Radiohead, Redjetson and This Et Al to start with.

What advice would you give someone coming to one of your gigs?
Make sure you can see the screen. If they’re my parents, I tell them to bring earplugs.

What is your favourite fast food?
Fried chicken. It’s so tasty.

Who or what do you miss the most?
On tour in Europe we were having a hell of a time looking for a decent cup of tea. How very English. I also miss having money.

What's your favourite childhood memory?
When we were snowed in – I couldn’t go to school for days.

What was your worst haircut?
Undercut.

What part of your body is your least favourite?
My nose isn’t straight, but I’m not too bothered.

Name three things you could not live without.
My guitars, my delay pedals and a decent cup of tea.

Dave recommends that you DiScover Shady Bard (who just happen to be playing a DiScover Club show in June - details), Heads We Dance and O Fracas, and believe us when we say he knows what he’s talking about. However, despite Mr Martin recommending that you frequent Oya Festival in Oslo because it is “very pleasant”, and Bestival on the Isle of Wight because it has “a really good atmosphere”, we suggest you get down to The Camden Crawl in London… mainly because his band are playing. Click here for the DiS preview.