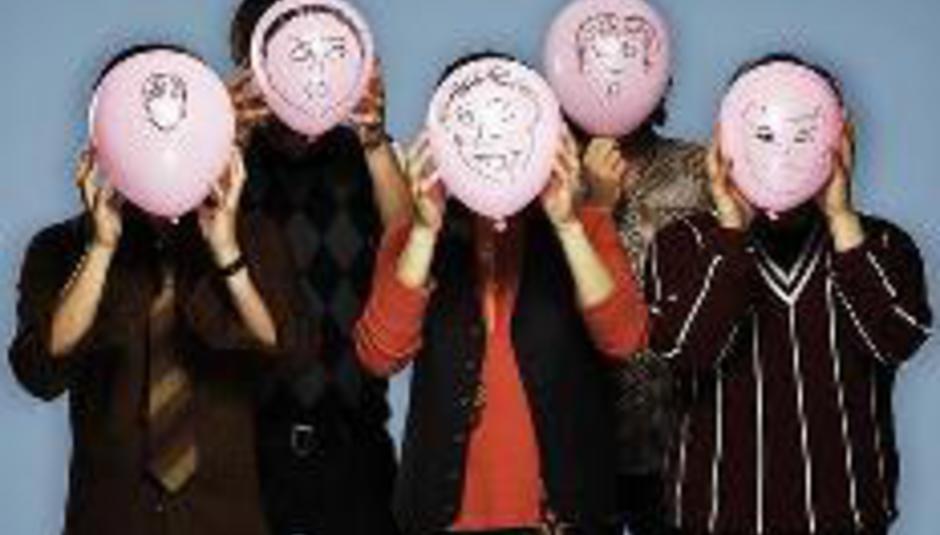 Either/Or #3: The Little Ones

Either/Or #3: The Little Ones

Los Angeles-based five-piece The Little Ones are relative newcomers on the indie-pop block – they enjoyed their first-ever UK tour earlier this year, alongside Loney, dear and The Boy Least Likely To, and their first official UK release, the Sing Song mini-album, was released in February through Heavenly.

The band - Ed Reyes (vocals, guitar), Brian Reyes (bass, keys), Ian Moreno (guitar), Lee LaDouceur (keys, bass, backing vocals) and Gregory Meyer (drums, backing vocals) – are touring the US with Kaiser Chiefs through April before returning to the UK in May for NME’s New Music Tour – dates at the end of the article.

DiS caught up with the quintet, sure to appeal to fans of The Magic Numbers, The Shins and The Spinto Band, at a central London bar not long after the completion of said debut tour for the third installment of Either/Or.

The Boy Least Likey To or Loney, dear?
Awww, that’s too hard… whatever happened to ‘Pepsi or Coke’? Do we have to explain our choice? We have a diplomatic answer to this either/or: orther! Orther. We have respect for both bands – they’re all way nice people, and that was a great first tour to be on. It’s hard to pick one… question one and we’re already like, ‘Oh, I don’t know about this Either/Or thing…’ I think we’re fans of both – they attract different people, but we like both. They were really good shows.

Fizzy pop or juice?
Juice! No, fizzy pop… ‘pop’ is what they say in the northern United States, and the deep south. They say it up north here, too? It’s up north everywhere. Any soda… except for one of us who used to drink it every day. We don’t really drink so much beer, but the beer in America is poor. Well, it is different…

The Beatles or The Beach Boys?
Awww man… Beatles, no doubt. We’d say The Beatles even though we do love The Beach Boys. Brian Wilson does not trump either Lennon or McCartney… or Ringo! So we’ve got Orther Beetlejuice…!

Which brings us to Tim Burton, ish – the first Batman film is better than all the ones after it, right? So, the first Batman movie or the ones after it?
That includes Batman Begins, right? I used to think that the first one was best, but we watched Batman Begins last night and Christian Bale totally works. It’s darker, and we prefer dark. It is a bit silly, on the glacier… and there was a Prince soundtrack on the first one! The set design on the first two was amazing – it was Batman in a Tim Burton world – but Christopher Nolan took on something daunting and based these characters in reality. And he made Batman a samurai. Like, Keaton’s only problem was that his dad died, ‘cause he was all like, “Where’s Kim Basinger? Let’s make out!” But the new one is fucked up. He is the conflicted hero, and Batman Begins is more interesting character wise. And then there’s another question: Kim Basinger or Katie Holmes?

Basinger, in her day, obviously.
Totally. You know they’re writing Holmes out of the next one – Maggie Gyllanhal is going to be in it. Have you seen Secretary? It’s real naughty – ‘dom, or sub?’

That sounds like something I get asked in Subway every week. But back to music: would you rather have a massive hit to keep you in royalties for life or release a series of acclaimed records that maybe didn’t sell so well and you had to keep on working ‘til I dunno when…?
Critically acclaimed, that’s pretty unanimous. If we had a massive hit – a song we were known by with nothing else – then one of us would be on Big Brother in ten years. So you might as well take longevity! We caught the end of the celebrity Big Brother here, when Jade was crazy. Nobody in the US knows who the fuck she is, but it was still in the news.

George W Bush or his dad?
His dad, definitely. He didn’t fuck up America so badly, although he is the lesser of two evils. And he only had one term, four years – that’s not really time enough to fuck things up. This current one has to go soon – it’s the end of his time. Hilary Clinton? She’s running for president but she won’t get it. Rudi Guilliarni, the ex-mayor of New York, will attract a lot of Republican votes. He’s a liberal conservative if that makes any sense… it’s an oxymoron, but it’s what he is.

Superpowers: invisibility or the power of flight?
Let’s look at that Heroes television show – I don’t think they show it here (they do), but there are characters in it with superpowers. We’d say flight, because there will be situations you’ll get into, if you’re invisible, that you wish you weren’t in, like spying on a loved one. That’s exactly what’s happened in a recent episode of Heroes. It’s a good show – we actually believe it’s real! Do you read comic books? No? Oh, okay… well the premise is what would happen if people had all these powers in normal, everyday situations. What’s funny is that the guy who can fly doesn’t want that power, as he’s running for senator in New York. It totally has morals. Flying would make touring easy… plus, how cool would it be to be in this bar and go, ‘Later, guys!’ and fly off! But capes? Capes serve no purpose – they’d get caught in engines, and they’re a drag. Doesn’t Batman use his cape to slow down? See… By the way these are great questions.

Ghosts: real or hokum?
Real! Energy has to go somewhere. We have seen ghosts, really. What’d you see? (I tell them about the ghost in my girlfriend’s parent’s house.) Shit… we got obsessed with this Most Haunted show.

That guy in it, Derek, got busted though. He was a fake…
Really?! Bummer. Is that why he’s not on it? We’re gonna have to Google this shit. He has his own show now. We like it ‘cause it has all these old buildings in it…

It’s just an excuse to pull down these old buildings to make way for new developments… But ghosts are real is what we’re saying. But here’s something music-related: Kurt Cobain, murdered or committed suicide?
It was murder man! Totally, and here’s why: in that Kurt & Courtney movie, it tells you how much heroine was in Kurt’s blood, and it’s like ten times the regular amount or something. He didn’t have the energy to pick up something like a shotgun, and the length of his arm wasn’t enough to pull the trigger, so someone must’ve shot him.

So it’s case open, then, just like Elliott Smith…
It’s the same – you could not put a knife through your chest from that distance. Someone would have had to stab him for him to be wounded like that. You physically could not do that with that force. You know his girlfriend, allegedly, waited a few hours after ‘finding’ him before calling the police. Bummer…

Okay, this is the last question: Weezer’s ‘blue’ album or Pinkerton?
Pinkerton, any day. It’s hard, but Pinkerton. The ‘blue’ album is great, but they tried something different on Pinkerton. It didn’t totally work, but they pushed it nevertheless. The drum tone on it… “God damn you half Japanese girls…” It’s awesome. We were, like 14 or 15 when the blue album came out, but the worst thing about Pinkerton is that, because it didn’t work, the band went backwards to their earlier stuff. The albums after Pinkerton suck, they’re disastrous. Even though it was blue that aided their resurgence, Pinkerton is the one people will continue to get into 20 years from now.

---
Check The Little Ones out on MySpace here. Their upcoming UK tour dates are as follows: