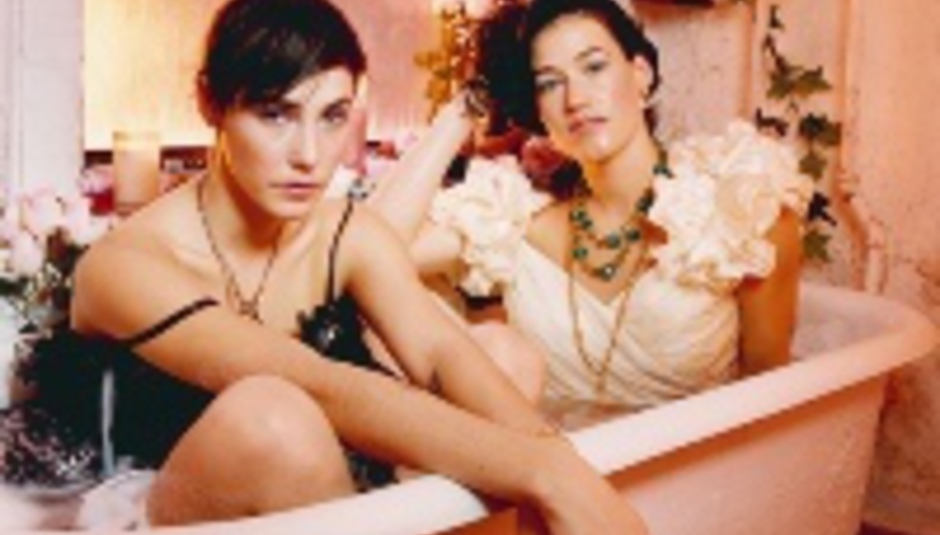 CocoRosie: Once in a Lifetime

CocoRosie: Once in a Lifetime

"All the fantasy's gone out of music, 'cos everything's too fucking real," so sayeth Noel Gallagher. But the mono-browed Manc maverick surely neglected to share this insight with CocoRosie.

Far away from the claustrophobic isolation of the Parisian bathtub they used as a recording studio just a few short years ago, the sisters Casady have come to embrace the great outdoors with their latest multi-instrumental wonder, The Adventures of Ghosthorse and Stillborn. As a disarmingly dulcet Sierra Casady considers : "We recorded most of the record on a farm in the south of France. It was a very special environment. We did everything at night and were there pretty much alone. We had an owl that lived just next to our room, a lot of kittens and really strange night creatures. It was a farm full of ghosts really."

Surviving the experience without the advice of Egon Spengler, Sierra claims that she and younger sibling Bianca communicated their ideas with the kind of telepathy that only sisters can comprehend. "It's strange how we both come to the end of a moment together, in an unspoken way. It's just a feeling that is born between the two of us." With the results of their twilight labouring under their arm, the nomadic duo eventually decamped, bound for Reykjavik, where they would rendezvous with sometime Björk and Bonnie 'Prince' Billy co-conspirator, Valgeir Sigurðsson, in the original land of fairytales. As such, Sierra attributes the move as a logical tactic. "The farm really affected the writing process and in the end we needed a very contrasting environment to mix the record and add final production elements. We brought so many muddy, murky, misty things from the farm and so it was kind of perfect for us to be in Iceland with the kind of outer space-like vibe there was going on there."

The result is another album where the girls continue to disregard the dictates of realism, burrowing deeper into an alternate world that fuses the folk sensibilities of heroines like Vashti Bunyan with a playful spin on the rougher spit and grime of heroes like RZA as they mix it up with lyrics that play like modern day Aesop's fables.

Trading hard facts for surreal magic, Sierra's own encounter with the classical world - as an aspiring opera singer - goes some way to explain CocoRosie's motivation to do so. "I've had a unique history as a singer," she confesses. "Experimenting in a lot of different genres and opera, I guess, has been one of my heaviest experiences. It's quite a twisted environment and society in the music world." Not that the experience has hindered the band from gracing the prestigious stage of Carnegie Hall, where they recently found themselves sharing the stage with a certain Dumbarton man. "David Byrne came out and we all sang a song together," Sierra enthuses, and the compatibility between the out-there individualist approach that these sisters live for and the art school shtick of the former Talking Heads frontman makes for a promising trait to own.

Dubbing themselves ‘Rainbowarriors’, the duo themselves caution that they "ain't nothin' to fuck with", and, accordingly, it seems they're at the height of their creative stride. "We're always changing," Sierra concludes, "always exploring new methods of recording and new places to compose. We're just following our own mythology and always looking for new ways to get into trouble."

CocoRosie’s The Adventures Of Ghosthorse & Stillborn is released through Touch & Go on April 9; look out for the DiS review in the coming weeks. CocoRosie’s MySpace page is here.