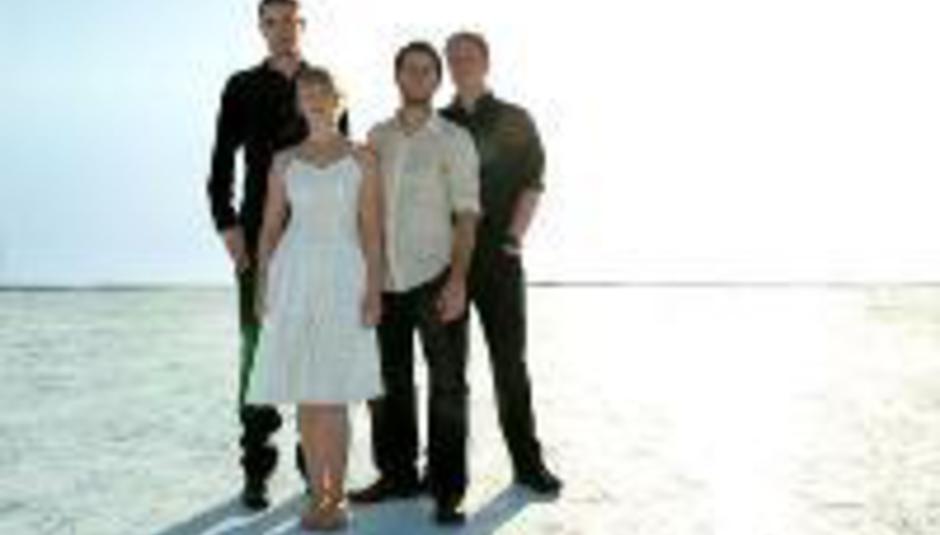 Murder By Death aren’t merely the proud owners of probably the best name in rock music, they’re also the makers of some of the hardest to accurately summarize music this side of a subgenre yet to be coined.

The quartet – based in Indiana but originally from a fair few corners of the great country known internationally as The United States Of America – are vocalist/guitarist Adam Turla, cello player Sarah Balliet, bassist Matt Armstrong and drummer Dagan Thogerson. They’ve three albums beneath their collective belt to date, but it’s the third, In Bocca Al Lupo, that is the first to officially cross the Atlantic thanks to the efforts of Cooking Vinyl. The LP, a conceptually rich work concerned with various levels of hell, is available now.

Although the album’s title translates, roughly, as ‘in the mouth of the wolf’, the phrase is actually intended to wish a friend good luck. With a number of well-received UK live sets in the bag already, it’s unlikely that Murder By Death will need too much luck to gain a sizeable audience in the UK. With a sound that’ll appeal to fans of Johnny Cash and Cursive, and everything in between, expect the quartet to be selling out venues before long.

Matt Armstrong took time out to answer some questions via e-mail, so we can invite you to DiScover Murder By Death…

Your band's name is taken from the title of a movie – do you think your music possesses any sort of cinematic qualities? I.e., could you envisage it sound-tracking something on the silver screen, someday?
I think so, yeah. We would love to do soundtrack work. Absolutely.

The band plays a type of rock music that's tough for contemporary critics to categorize – do you think this is a beneficial thing, or would being a more 'straightforward' proposition aid your cause in terms of getting press, and said press accurately conveying what the music's like?
It's really hard to say. I’m sure there have been times when we didn't get press because we couldn't be pigeonholed, but I think ultimately that's the quality that gets people interested in us. If we get a good write-up, it usually ends with something to the effect of, "but you just have to hear it for yourself".

The band's profile was given a sharp lift by Ricky from Thursday – do you find yourself popular among audiences associated with such an act? Or is your average audience a little older?
We're still trying to carve out exactly what our audience is. Because of all the different types of tours we've done over the years we've played to lots of different crowds, and as a result our shows tend to be made up of a mixture of those people.

What bands, thus far, has Murder By Death attracted comparisons to, and do you feel they're flattering? Is it better to be part of a recognized style or scene, or to be way leftfield and difficult to group with a selection of other artists?
Lately we've been getting a lot of Tom Waits, Nick Cave and Johnny Cash comparisons. It's certainly flattering to get mentioned in the same sentence as artists like that, although I’m not sure we deserve it. In the end, I guess, it's not so much about ‘fitting in’ to a particular scene so much as just making music that people enjoy.

The songs often feature lyrics that seem to be taken from storybook pages – by this I mean they're a lot more engrossing than your average 'a girl did a bad thing, I'm sad' fare. Does lyric writing come before the arranging of the music? Do your fans get a lot out of the lyrics?
The lyrics are Adam’s department. I think he usually gets a general story idea and then starts combining it with music he has written, but I don't know. I think people get the same thing out of our band as they do from the movies, as far as just enjoying a story or whatever. You'd have to ask them about that.

You supported Braid on their reformation tour – how was it playing before a crowd who, most probably, only had one band on the bill on their minds? Do you find it tough playing to crowds that aren't necessarily there to see you, and is this scenario becoming rarer and rarer as you become more established?
The crowds on the Braid tour were actually all really nice to us, but there have been situations where we were certainly not the main attraction. Most of the time people actually give us a chance. Occasionally we play to the completely wrong crowd, but then that crowd's parents end up liking us. Go figure.

In Bocca Al Lupo is only just earning itself a proper UK release, but has been available on import for some time – why did the album take so long to cross the Atlantic?
We were toying with you.

Many UK listeners will see the Bocca record as your debut – do you hope that people will take the time to explore your previous two albums, and will these records earn themselves UK releases?
It would be great if people went back and checked out the first two albums (Like the Exorcist, but More Breakdancing and Who Will Survive, and What Will Be Left of Them?). We're still proud of them and still play some of those songs live. They may get a UK release in the future.

You've worked with Gerard Way – did the explosion of popularity My Chemical Romance experienced last year surprise you at all? Would you be able to handle such a sudden profile hike?
We always knew those guys would make it big. The great part about it is that those guys are still total sweethearts and they don't forget their friends. They have handled fame really well. I don't know if we could, or if we'll ever have to worry about it. I kinda doubt it.

You worked with J Robbins on the Bocca album – what did he bring to the sessions? He's a splendidly acclaimed producer, after all. Do you know the latest on his son's situation at all? We heard he was unwell.
J is just awesome. He has done so many different kinds of records and is such a great musician, so he really understands how to get the best out of the bands he records. He’s also incredibly humble. It was a really comfortable way to work. J has been doing updates on the situation with his son on his website, here. There are lots of benefit shows happening and donations are being made. We strongly urge people to help out if they can.

You've played a good few UK shows, and return in April – is it a country you enjoy touring, or do you find better audiences in other parts of the world? Is your current situation – being introduced to a new territory – exciting at all, or do you feel like you're re-treading ground at all, what with the promotional work for an album that came out almost a year ago?
We love playing the UK, and we're excited to come back and also to see some new places. We're such a baby band in terms of European exposure, so it certainly doesn't feel like we're just beating a dead horse or anything like that. We're hoping to come over a lot more.

Following the April tour, what does 2007 hold for Murder By Death?
In may we're doing Canada with the Reverend Horton Heat, and then we'll be doing some more US dates with the Rev in august. In between we'll be working on new material and drinking beer in the sunshine.

Check Murder By Death out on MySpace, here. For tour dates, click here.