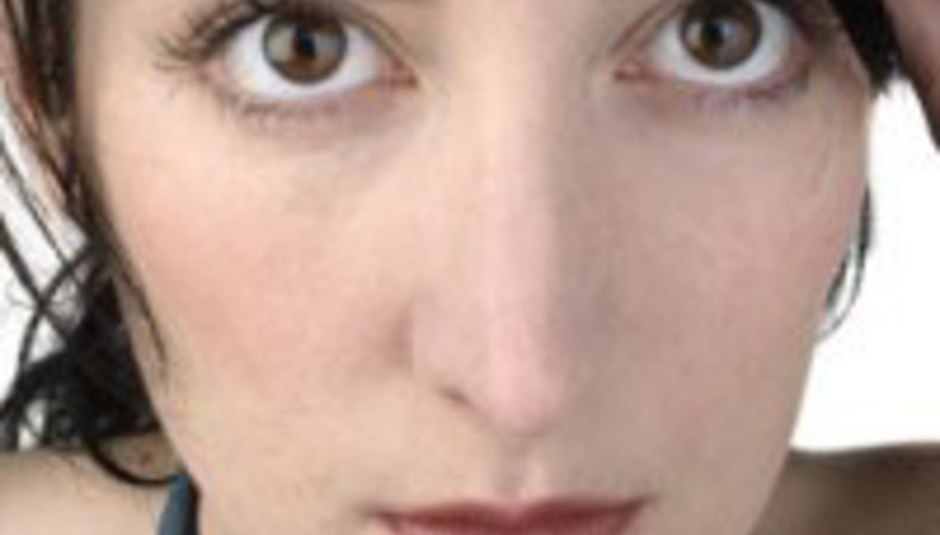 DiS is ‘backstage’ at London’s Boogaloo pub, high in the hills of Highgate. In a room cluttered with posters, buzzing computers and ringing phones, Maria Taylor sits sipping red wine poured from a bottle in her ample handbag. The Saddle Creek-signed songstress is in town for a single acoustic performance, here, in a couple of hours.

Taylor’s second solo album, Lynn Teeter Flower, is scheduled for a March 12 release; it’s the follow-up to her well-received debut of 2005, 11:11. Formerly of ethereal indie-folk duo Azure Ray – also signed up to Saddle Creek – Taylor’s latest long-player is a far-glossier affair than its stripped-down predecessor. That said, the night’s show is one of utmost intimacy – despite the often unsociable nature of many a London crowd, those in attendance remain silent for the duration of each of her eight-or-so songs. Really, one does lose count what with all the flashes of magic in the air.

As her music past and present has something of a soothing affect on the average listener, DiS elected to invite Taylor to play the role of Agony Aunt for our time together. So, genuine DiS reader-submitted questions in hand, we set about gaining the answers to your most-burning issues. Was every remedy entirely serious? What do you think, really…

I’m worried about the amount of rum I consume when I go out. Can you recommend me another drink, preferably one that doesn’t make me feel like I’ve died the next day?

Yes, I can. Red wine is the only alcoholic beverage that is really beneficial to your health. They say in moderation – they say two drinks a day. But I really think that if you up that to four or five drinks, how can it be bad? If two is good for you…? And they’re doing more and more study, that suggests that if you drink and absolute shit-tonne of it, it’ll actually prolong your life. The only thing is that you might have liver problems, but just get a transplant. Everything else will keep ticking for a lot longer. So I say switch from rum to red wine, and go ahead and spend the extra bucks on better red wine, ‘cause it’s worth the money and otherwise you will get a headache. I keep a bottle in my purse… I’m not kidding! And don’t drink screw-tops! Oh, apparently they’re making them better because of a shortage of cork, but I think that’s just a story.


On Saturday when I met some people from the internet, I got a bit too drunk. Some of the people took advantage of my drunken vulnerability. At first I thought they were being friendly, but now I realise that I’ve been the victim of internet grooming, and no matter how much I shower I still feel violated and unclean. Is suicide the only way out of this nightmare?

So this person was touched through the internet? They met them in person? Oh, okay. I would say that suicide is never the answer! I would – let’s see, what should I say to do? I would, like, buy some different kinds of soap, something that might properly cleanse you. Maybe some microbeads, y’know – exfoliate a little more. I think if they got rid of the dead skin then the memory of that terrible, terrible night would wash away. Let’s hope so.


I broke a metatarsal in my foot. Should I have kept dancing, through the pain, or should I have stopped, sat down and not enjoyed myself so much?

Um, I would say keep dancing. I was a ballet dancer 18 years, and our feet would bleed and hurt so bad and our ballet teacher would just say, “Go put on some lipstick, you’ll feel better”. She was Bulgarian and really old, and I don’t know if it was some old Bulgarian remedy for bleeding and aching feet, but… Yeah, we put it on our lips! The thing is, it’s mind over matter: I would just advise anyone that has hurt their feet in any way to put on lipstick and they will feel better. Carry on dancing, always! Don’t sit out – you don’t want to live life with regrets.


I’m turning into a slut. Being ‘on’ the ‘indie scene’, every girl I’ve ever done things with is one or two degrees of separation from each other. I am worried that if this continues there will be no women in the city who I haven’t had ill-advised couplings with, or with friends of. The simple solution would be just to stop, but I enjoy drinking alcohol a lot. Not only is this situation and lack of control depressing, but it’s also a really fucking massive cliché. Can I blame the kind of macho culture that I live in?

(Laughs) So this question is just if he can blame the culture? Certainly, why not – go ahead and blame it. Blame anything! I would say just move somewhere far, far away. Move to a remote island. Isle Of Man? Yeah. I don’t know what’s there, but it sounds like the right place. Oh, and use a condom. That’s always my advice. To sluts.


Playing a gig in front of five people is rubbish. Shall I give up and play Frisbee?


I own a pair of fish, but soon I will also have two cats. Can these creatures get along?

I think they can get along, but make sure that the fish tank is always closed. A loose lid? Oh… Cats can leap. I dunno… I love pets, so I just say the more the merrier. I’m gonna say a cat gives you more pleasure – fish don’t make purring noises in your ear or rub up against you. It would be sad if the fish got eaten… but not that sad.


I drink far too much, and I know it’s affecting my health. I’m 27 – should I take action now?

I’m waiting ‘til I’m 35. I think that’s a good year to start changing your habits. And your liver is very resilient – someone can have a liver that looks like that of an 80-year-old, or someone that’s dying from liver failure, but if you stop drinking for a few months your liver can regenerate. It’s the most resilient part of your body, so I say take a month off but don’t stop if you don’t have to. Your liver really can get back into shape, so one month off every now and then is good. I’m not that good at doing that but my friends are. Lots of people I know really set aside a month and do it, especially after all the holiday partying. I drink as many calories as I eat, so if I stopped drinking I’d have to eat a lot more or else I wouldn’t exist. Don’t print that! (Whoops.)


I told my best friend I was in love with her, and she said she felt the same. But now she’s changed her mind. Despite watching enough films and television to know better, I now tale offence at everything and I can’t stop hassling her, trying to explain how I feel. It’s making her hate me. How can I stop?

I would say that you have to stop, because when you have a friendship and someone starts to like you in a romantic way but that’s not reciprocated it’s really easy to get annoyed with everything. The more someone pushes the more the other’s going to repel, and it just gets so annoying. If you really love this person you at least want to be around them, so you might ruin the friendship unless you back off. And the minute you back off, because people are weird, she’ll probably come around, because some girls – some humans – for some reason just like it better when it’s harder, when it’s more of a challenge. And not just girls, guys too. Sometimes.


I’ve fallen out with my cousin as she said she’d rather have her future children schooled in South Africa than England. She said, “I don’t want my kids pregnant at 13 and smoking dope from 14”. I told her this was a massive generalisation, and that there are hundreds of good schools in London. She told me I was getting defensive and that was just my opinion, and said that all English schools were bad, and that my schooling was “just lucky”. I told her that she had offended me, she stormed off and now we’re not talking. I am not apologising for her right-wing comments, and it’s making me upset. What do I do?

I would just say that if you’re not sorry don’t apologise, ever. Stick to how you feel, just don’t have your future children go to school in the United States of America. I feel that it’s probably worse than South Africa or England.


Why am I such a failure at everything? I mean, I’m not even good at failing – I just sort of do moderately poorly at everything I turn to. Is there any sort of medicinal remedy for this?

Medicinal? I would say… I could think of other remedies, but if we’re talking medicinal I would say maybe try some antidepressants, y’know? Something that might boost your confidence levels. Maybe try antidepressants for a year, and then wean yourself off of them – ‘wean’ is the operative word, never stop cold-turkey ‘cause then you might get suicidal and wind up killing yourself. Only in this case he’d fail, so suicide isn’t an option. Maybe try something to help with the confidence, and learn how to maintain that feeling, and then you’ll be ready to step up to bat… Hit a home run… Succeed… Go all the way! The equivalent of stepping up to bat? Stepping up to the wicket?! Nah, I don’t know about the antidepressant thing – I’m not sold on the whole idea – but I thought I’d just throw that out. They said ‘medicinal’, and I don’t know what kind of medicines help you succeed. Cocaine maybe, but I wouldn’t advise that! Marijuana, I wouldn’t suggest that. Methadone perhaps. Meths? Crystal Meth? (bursts into a fit of giggles)

Maria Taylor’s second solo album, Lynn Teeter Flower, is released through Saddle Creek on March 12, 2007. She is set to tour the UK in May. For more information and to hear songs visit her label-maintained MySpace page, here.