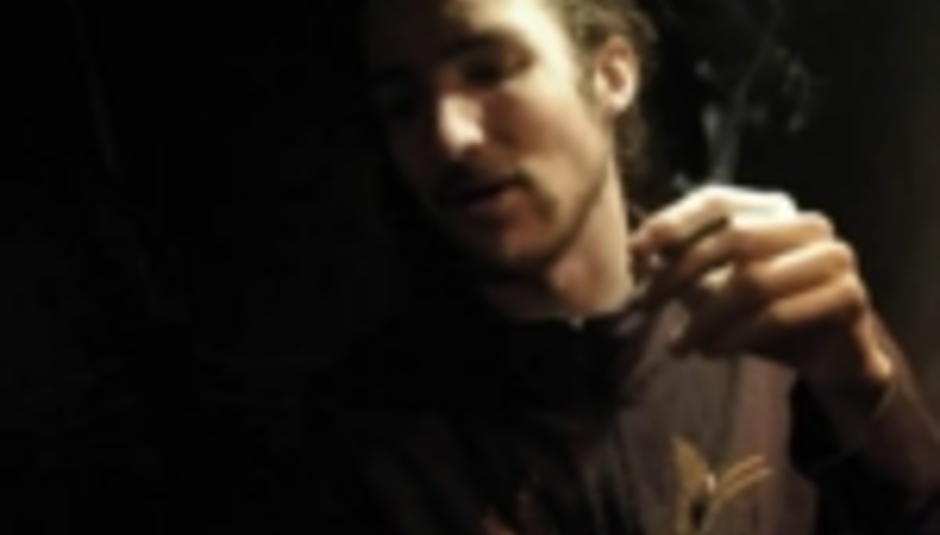 From being kissed by Paul Weller to drowning scenesters in a sack: DiS talks to Frank. But not about drugs.

"Ahaha, I don't discuss my personal indulgences on record..."

Were he sat in front of me, I know Frank Turner would more than likely be wearing a wry smile about now. But, alas, he's buggered off to India. Indeed, given the choice between going on his pre-booked holiday to Delhi or being bombarded with questions by this low-rent hack in some shady London pub, Mr Turner (somewhat surprisingly) chose the first option. Why? Who can tell, but I still manage to intrude on his holiday via a merciless assault on his inbox.

To his credit, he obliges. Of course he obliges, dear reader, as Frank Turner is not one to renege on a deal.

2006 was a big year for Frank. After the split of his previous outfit, Million Dead, in September of 2005, he made the transformation from punk-rock frontman to folk-rock troubadour seemingly overnight and hit the road hard, turning up seemingly anywhere and everywhere, from house parties to the streets of Leeds. Before long, he had a full arsenal of (often tongue-in-cheek) songs about life – some his own, some covers - an EP on Xtramile and, as every punk-rocker truly desires, a support slot on a tour with The Automatic. Wait, what?

“It was cool” - here would come the smile again - “they're Million Dead fans and into what I do, too. It did me a lot of favours. They were actually one of the nicest bands I've toured with, and they also rocked my face live, much heavier than on record. Hugs all round.”

Perhaps not many would agree with his endorsement of the currently-successful screechy indie-kids, but Turner's never been one to worry about sharing the popular opinion. He's more concerned with keeping his feet on the ground. When it comes down to business he doesn't mess about: he skillfully dodges every ACME-like trap set before him, refusing to be drawn into slating the work ethic of other, more work-shy bands (“Everyone has their own work ethic and different types of music demand different approaches... you can either waste your time and energy getting angry about them or you can get on with being better”) nor can he be persuaded to reveal what he currently believes to be live music's biggest foe:

“In the grand scheme of things, the UK has it pretty damn good when it comes to live music... I think the impending closure of the Astoria is a real shame, but it's not like someone's knocking down the Taj Mahal, you know?”.

Where his down-to-earth mentality stems from is no matter, but it’s helping him become one of the most charismatic, entertaining singer/songwriters on the current circuit, spending endless hours onstage taking the piss out of himself. January 2007 sees Turner on the verge of releasing his debut album, Sleep Is For The Week, the result of fifteen months of sweat, tears, and probably some other bodily fluids. Bring on the questions...

I heard you say once that you've had Sleep Is For The Week scientifically tested and it's the officially the best album ever. You're pleased with it, then?
I make joke, hahaha. Actually yes, I'm very pleased with it. All you can ever aim for is to produce the best thing you're capable of in any time and place. It was a little daunting doing a whole album on my own for the first time. And it came out better than I expected it to actually. So victory is indeed mine.

Was it hard, though, to make the transition from frontman to solo artist, having been surrounded by people for so long?
Yeah, scary, not just in terms of performance, but the whole organisation of everything. In a band you have a team to back you up, looking over legal shit, making decisions, arguing with promoters, booking tours, playing shows. All on your own, it's not easy. Without being melodramatic, there've been some shitty times in the last year for me. But I think it's made me learn fast, in every department, not least songwriting. I love the paradigm of the core of a song being an instrument and a voice. You can add to it arrangement-wise as much as you like but the bottom line is that there has to be a heart, and it has to be good. Playing solo live makes you find out pretty damn fast which songs work and which don't.

In contrast to the aforementioned “shitty times”, what are the most bonkers things to have happened to Frank Turner since the transformation from Million Dead frontman into a wandering minstrel?
Dear Christ there are many, many mad things that have happened... playing in the streets of Leeds with Sam Get Cape (and watching him fuck up his ankle on a shop - long story), accidentally joining The Tailors after a seriously heavy party, supporting Estonian hip-hop crews in Estonia, being drunk driven (against my will) around the south of France, getting kissed by Paul Weller... life has not been boring.

Yeah, and Clear Channel must look after you quite well too. Don't they own you? That's what I heard...
Hahaha... the Brighton story? We had a show booked there once with Million Dead, and the whole thing went weird and then got cancelled for reasons we couldn't initially fathom. Eventually we found out that the promoter (who was also in a scene band from the town) had got it into his head that we were essentially a manufactured band, backed to the hilt by Clear Channel, out to dupe 'the kids'. Where in the name of Christ that came from I don't know, and the fucker could've had the balls to discuss it with anyone in the band first, but no, he was just a scene fuck. Drown the lot of them in sacks. I really, really fucking hate that mentality - it's basically jealousy fuelled by living with your parents.

I guess it all provides some decent writing material for the future though, yeah? Probably one of the things that helps you standout is your ability to look in the mirror at what you've done and flaunt your faults in song. With that in mind, DiScuss: You can't laugh at other people until you've learnt to laugh at yourself.
Massively agree with that. Songs, and people, are thoroughly fucking dull if they can't laugh at themselves. That's the whole problem with Damien Rice - it's so fucking doe-eyed and self-serious, it just makes me want to vomit. Honestly, if you met someone with the personality of a James Blunt song, you'd fucking punch them in the throat at the first available opportunity, right? Many a true word is spoken in jest... if you want to make a point, showing you're human before doing so is a good plan.

Obviously it's not all fun and games though: you don't shy away from a point when you feel strongly about something (and I'm going to reference 'Thatcher Fucked The Kids' in this). Do you really believe you can lay the blame squarely at her door for the faults of society today?
Thatcher is an easy target. I disagree strongly with her political viewpoint but she was a consummate politician. It's more the ethos of that era that I wanted to address. Basically, I think that dumping all the blame for anything on one person is irresponsible escapism. That's why most conspiracy theories piss me off - bad things don't happen because of a few Bond villain shady guys in suits, they happen because most people are cunts to some degree. That song is also supposed to be about now, the effects of an educational policy and a general societal approach.

So what does the immediate future hold, post-album release? Are you booked up 'til 2010?
At the moment I'm looking pretty solid through to about October, and it stops there because we're not sure of the plan thereafter. I'm going to be in the States here and there (SXSW and the like), Europe, around the UK a few times, it'll be fun. I'll be touring with a backing band some of the time, which I'm looking forward to...

...and I guess, in between, you'll be turning up in people's kitchens playing house parties. Seriously, do you ever turn down a gig?
Sure, I turn down shows a lot of the time. Sometimes people don't bother checking my schedule before sending an offer (duh). Sometimes people offer me "beer, probably" (I'm not kidding) to come play a houseparty in Cumbria or something. No. I'm getting a little pickier in my old age... I think I've paid my dues as it were. I have played some insane places in my time. As I enter the second half of my twenties I'm hoping to leave behind playing house shows in the middle of nowhere.

Frank Turner: he has an album out, he wants you to buy it and he doesn't want to play in your motherfunkin' kitchen for a can of Fosters, capisce? Sleep Is For The Week hits shop shelves in both Real Life and cyberspace on the 15th of January. Maybe you'd like to buy it.