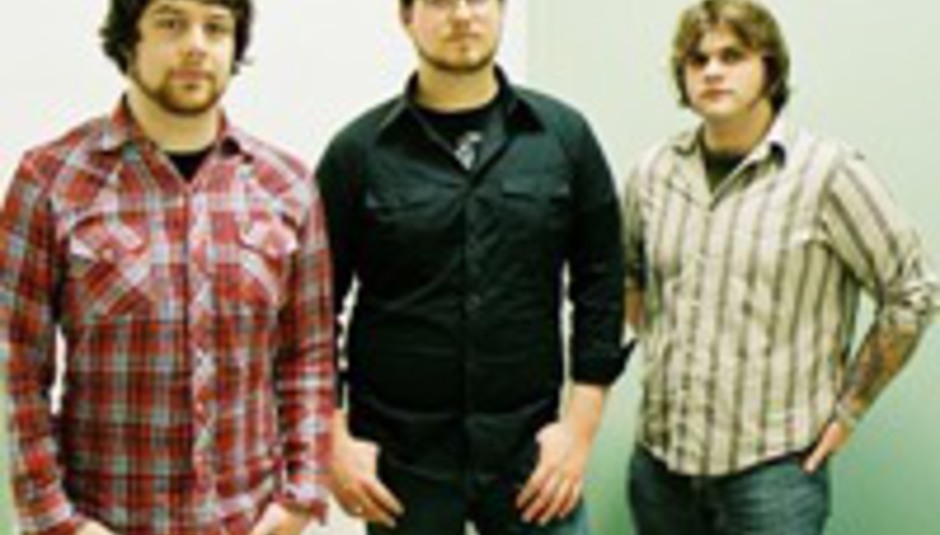 Young Widows are three men rocking out of Louisville, Kentucky. These very same three men – we’ll call them Geoff Paton (drums), Evan Patterson (guitar, vocals) and Nick Thieneman (bass), as those are their names – were previously in a band called Breather Resist. Perhaps you heard of them, or better still heard them. Or perhaps you didn’t: it doesn’t matter that much, as Young Widows are the here and now and, frankly, the band we’re choosing to care about.

Not unlikely to appeal to fans of The Jesus Lizard and Shellac, Young Widows’ debut album Settle Down City was released via Jade Tree in September. DiS liked it, a lot – click here to read all about it.

They’ve no UK dates lined up as yet, but American readers can catch the trio in Indianapolis on December 21 and in Chicago on December 23; click your way to the band’s MySpace for more information and stuff. Stuff like songs, and stuff.

Evan Patterson elected to play the Some Questions game. Evan, we salute you, albeit via the medium of the internet. That’s a virtual salute. Virtual!

If you could be drowned in anything, what would it be?
Am I supposed to say "sound"? That would be really cute.

Apple Mac or PC?
Mac, because that is what all the cool people use.

If you could make one already-written book as important and integral to Western society as the Bible, what would it be?
The Book of Common Sense. Wait, has that been written? I think I wanted to write it, but it would be kind of useless because no one would understand it.

Do you believe in a God? Which one and why?
God Patterson. I want to name my firstborn child God. This will cause all of his or her close friends growing up to not really understand what an actual God is... or isn't. At least I hope it will.

Have you had any near-death experiences?
Nothing special: just car wrecks and that kind of shit.

Who would play you in a film based upon your illustrious life?
Vincent Gallo, just because he is so bitter and pissed.

What is your favourite country and why?
I don't really care. Every country is boring and lame if you live there for longer than a couple years.

Who is your favourite non-musical celebrity and why?
Philip Seymour Hoffman is one of the greatest actors of all time. He just isn't sexy so everyone looks at him at differently.

What has been your most notable experience with fans and admirers?
Someone told me once that we sounded kind of like The Jesus Lizard.

What band do you wish your band were as good as?
I don't really want to good at playing music. I just want to do what I can to get by.

What advice would you give someone coming to one of your gigs?
To bring their rig and be prepared to dance a jig.

What's your favourite booze and why?
Anything that does the job fast.

Are you a vegetarian? If so, what are your reasons?
Vegan, and it makes me feel smarter than everyone else.

Who or what do you miss the most?
My lady friend, Casey, and my dog, Switchblade Betsy.

What's your favourite childhood memory?
Age four, falling down stairs and bashing my head against the wall.

What was your worst haircut?
Age nine, flat top courtesy of Fantastic Sam’s.

What festival do you recommend that everyone should go to and why?
Touch and Go 25 was a really great time. Maybe if Dischord had a fest that would be worth attending.

Evan suggests that DiS readers make an effort to DiScover Celebration, Pissed Jeans and Part Chimp, even though “none of them are really new”. He really can’t live without jeans, electric toothbrushes and “shit sarcastic interviews via the internet”. Shit, I guess that’s us told, then.

For more on everything Young Widows, check their MySpace and website.