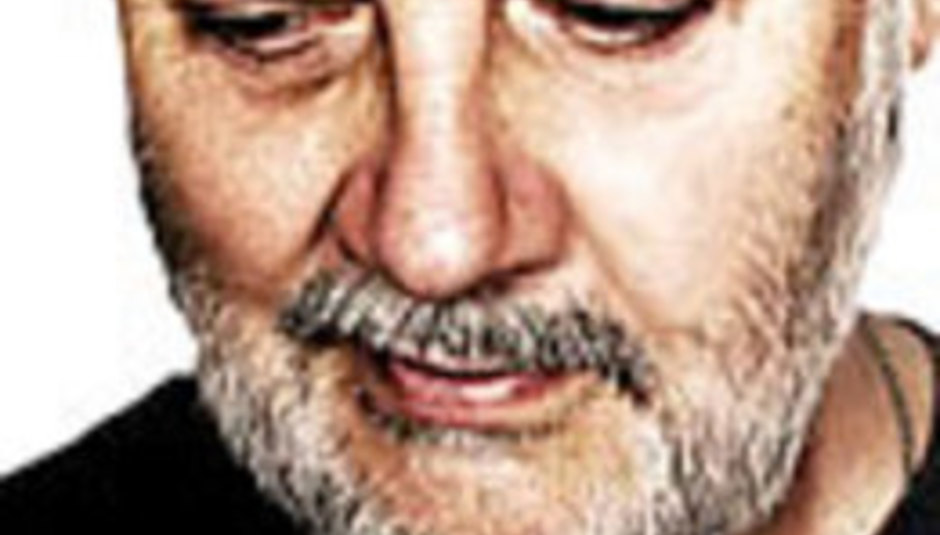 As much as the music press – including the website you're on now – would like you to believe it, music isn't entirely centred on pivotal moments, particularly when things come to an end. For instance, I could not tell you when punk died, whether it was Sid burning out in '79 or the first Ramone fading away in '01. I doubt Altamont can truly been seen as the sole moment that turned a freewheeling Sixties hippie dream into a sinister and dull early Seventies, and I can't see how Britpop's demise can be entirely blamed on the nauseous cocaine tornado of Be Here Now. And, of course, it's difficult to argue that rock and roll went down in the same plane as Buddy, never to rear its exhilarant mug at the Western world again. But I can without a mere twitch of doubt pinpoint the precise moment where the first wave of truly independent, innovative and... oh, go on... life-affirming popular music came to a sad end, and that's when the man who lived through all of the above (and plenty more besides) lived his own last moments.

Tuesday 26th October 2004. When the cricketer left the crease.

Hence, it's almost twelve months since John Peel's demise and time when, although it can never be comfortable, his absence has to be accepted, and his enduring legacy amongst music fans is celebrated on the anniversary of his death. But how has a man adored by so many varied fringes of musical society, so continually (albeit sometimes almost accidentally) on the cusp of the cutting edge and yet so recognisably established as a public treasure, had his legacy dealt with? It may seem strange to those somehow unaffected by his influence that the loss of a 65-year-old is still being felt in the world of that most ageist of entertainment industries, pop music. But that is only part of the reason, for me anyway, that Peel was a brilliant antihero for an increasingly shrink-wrapped, survey-led culture. He was in his sixties. He was balding. He hardly possessed a stick-insect figure. He had a beard, and a grey beard at that. He was middle-class. He drank red wine rather than lager. He was well-read, with a public-school upbringing. He enjoyed living in the countryside. He had a stable, well-balanced family that he could talk lovingly about without lapsing into tedium. He was actually excited about music. And, perhaps most uncool of all, he didn't attempt to hide it. A moment's listen to the Radio One roster across its history show that other deejays couldn't do that, never mind pop stars. This is perhaps why, in an attempt to pay tribute to his life, some areas of the broadcasting fraternity seemed to have ultimately and rather spectacularly Missed The Point. John didn't gain such a following by merely playing records. John was someone people could relate to.

Perversely, it seems to have been the BBC that have often paid the most fitting tributes to Mr Ravenscroft, despite being the corporation that tried so often to reign in his rebellious, free-thinking nature for what they thought was their own gain. (Sure, Radio One was his home for decades, but it was still the establishment that forced a diabetic man of a pensionable age to work until one in the morning on weekdays.) Whilst in the daytime their allowances for display of affection barely extended beyond letting Scott Mills play a Buzzcocks track (yes, the Buzzcocks track you'd expect him to play), they seem to have embraced John's devotion towards new music. Of course, it's been a difficult year for new music, and it's disheartening to think of all the bands that have remained undiscovered due to the loss of someone with the sheer curiosity, enthusiasm and unbridled passion to willingly listen to all he could. But his taste could barely be second-guessed, and hence the way that John's radio slot was handed over to a three-pronged and disparate showcase for new sounds, OneMusic, may seem obvious but is fitting nonetheless. It's Rob Da Bank's Thursday night show that is musically closest to Peel's, even though the eclecticism within isn't handled as naturally as before (one thing that poet Benjamin Zephaniah said was most refreshing about the Peel show when he was growing up: "It wasn't patronising, like 'Now here's some reggae!', he just played it, like it was the most natural thing in the world"). The station also sought to show and celebrate the eclecticism of his shows, though, and not entirely in a nostalgic way. Shortly before Christmas 2004, Radio One organised the 'Keep It Peel' night, which not only brought together acts as diverse as Jon E Cash, Damon Albarn, Trencher and DJ Scotch Egg, as well as bringing back together Hefner and enticing The Wedding Present out of their live hiatus, but also showed that things will continue in his spirit – true to form, Belle & Sebastian even did what they traditionally did during their Peel Sessions, and showcased their own new material. It was a show of solidarity, perhaps, but also showed that the Beeb understood how important Peel still was, and not only for its own credibility. The nature of the wide-read obituaries in the "posh papers" meant that many of those writing would not usually have ventured into the Wing Ding for years and, despite his new-found popularity amongst Middle Englanders with the success of Home Truths, Peel was too often treated as an adolescent thrill long past. Radio 1, despite dealing out a rather hefty dose of nostalgia themselves, were right to show that it wasn't just about heady recollections of sneaking the transistor under the bedclothes, because people were still being enlightened by the music he discovered and the way he played it. And of course, he could have continued doing so...making such a loss all the more saddening.

Having said that, the question of how to portray Peel's life was almost as important as that of how to ensure his legacy would live on. Naturally, a great swathe of eclectic publications paid their respects: The Wire called him "a square peg in a round hole"; Terrorizer, a publication Peel once told Home truths listeners that he was too nervous to take through airport customs, spoke so much of his late-eighties thrash championing that they told the same Electro Hippies anecdote twice; NME decided to ask their favourite artists to comment, and Carl Barat replied with "He didn't like The Libertines did he? God bless 'im."* The Word decided to write an article with an undercurrent of "well, he wasn't a saint, was he?", which would have perhaps been an attempt to tide the 'Queen Mum' levels of admiration from all corners, but the rather detailed accounts of his pre-Pig promiscuity hardly seemed refreshing when his corpse was still warm. Not soon after, though, two separate biographies hit shelves to a convenient Christmas market, despite widespread reports that Sheila would finish the Peel autobiography. The separate but similar accounts by Michael Heatley and Mick Wall may have had good intentions, but it's unavoidable that the authors barely knew the man – Heatley spoke to him a few times about The Lurkers whilst writing for Sounds, and Wall is better known as the biographer for Guns 'N' Roses - and that their facts were occasionally naggingly incorrect, for instance claiming that 'White Blood Cells' was the debut White Stripes album, or that Mark E Smith provided vocals for Safe And Sound's heady-hardcore classic 'Identify The Beat' instead of the less famous (and presumably less curmudgeonly) Marc Smith. (Wall's book was even withdrawn and pulped for making libellous accusations about, of all people, The Farm). But again, the two seemed to focus on the bands of mammoth success that were allegedly discovered by Peel and his late producer/friend John Walters, with Wall even putting pictures of The Smiths and Sex Pistols in the centre rather than, well, more portraits of the book's subject. They seemed to miss one of the things that I, and I'm sure countless others, will feel most heartbroken by in Peel's loss: the thought of how many new, unheard and potentially brilliant artists will get no chance of any radio play at all - considering the sheer number of "Peel favourites" that were so-called because their entire nationwide exposure rested solely on John's support, it must be too many already to bear thinking about. I won't miss the man for supporting the likes of Pink Floyd, Joy Division and The Strokes. I'll miss the man for supporting the likes of Hyper Kinako, Prosthetic Cunt and The Beatbox Saboteurs.

So now, a year on after John Peel last broadcast one Radio One, it's time for a deluge of tributes looking back, hopefully as a precursor to looking forward. The events planned seem to have varying degrees of suitability – John Peel Day, for instance, seems a fitting way of getting more people to gigs, even if it means the most attention is paid to the bigger names playing, whereas the planned Peel compilation barely scrapes the variety/obscurity of John's tastes. The autobiography started by John but posthumously completed by Sheila – going under working titles including 54 To 45, Dancing Jack and Jesus Wasn't Made Of Fish - has already attracted press controversy, centred on the claims about his treatment by older pupils at Shrewsbury school and his passionate 'night in' with Germaine Greer. The recently-announced concept of a Band Aid-style version of 'Ever Fallen In Love (With Someone You Shouldn't've)', featuring the likes of The Datsuns, The Futureheads and various Pink Floyd members, quite frankly, sounds pants. Of all of them, the most apt tributes appear to be suggestions by listeners, whether it be a minute's noise instead of a minute's silence, or a twist on a floral tribute that could see as many Peel favourites as possible lay a copy of their debut single on the steps of Broadcasting House. Of course, there's still many keepers of the flame, with radio shows like Another Nice Mess staying abreast of new discoveries and Peel blogs like The Perfumed Garden, Radio Plus and Right Time, Right Place, Wrong Speed delving into old ones. But whatever you do, it's important to remember that there's now more stuff to be discovered and raved about than ever in his absence. It's been a tough year, but at least it's been the best year for music we've had.

*Peel did, however, once play 'Vertigo' by the Libertines, but only because he thought the opening riff sounded remarkably like that of an old beloved skiffle record.