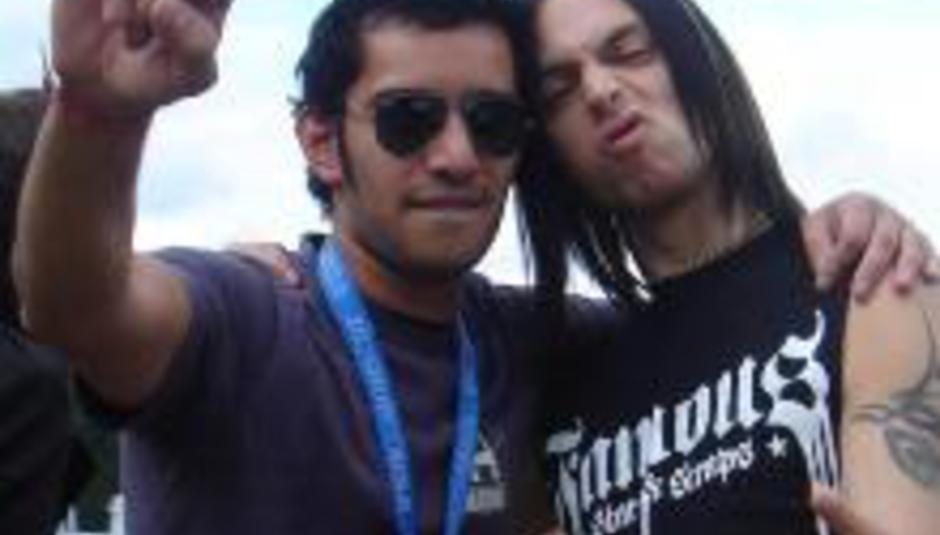 by DiS Festivals September 2nd, 2005
Funeral For A Friend (Reading, Sunday) have spent quite a long time in LA. This would explain as to how they've become festival tent-rats to outdoor behemoths. Possibly. There's more than a hint of studied yank alt-rock schtick to their schtick. It's all about picking the people up in the moshpit and mentioning their new single. But dammit, it's fun - even ignoring the fact that their sophomore LP is merely grist to the lumpen mill of Emo circa '05. Still, there's the joys of 'Escape Artists Never Die' which marks them out as a main stage band with an anthem; there's actually surprisingly few of those about on the Sunday big stage.

Queens of the Stone Age (Leeds, Friday) play 'Regular John', which was a result 'cause much of the new material sounds flat, weak and distinctly... Carling-like. That said, 'Little Sister' damn near prompted a sing-along among the more gnarly sections of the crowd. At the end of the day though, this set was not by a band, this was a group of session musicians. Where's the soul, brothers? Leave it at Nick's house?

Alkaline Trio (Leeds, Friday) are hampered by windy sound. The doom punks fail to rock out as much as they ought to do; a band who clearly need the walls of a sweaty venue to make sense, Alkaline Trio are a six-legged cliché of faux-goth riffs and pop-punk conventions. Move along, emo-kids – nothing to see here.

The inspired (although almost no-brainer) choice of Iron Maiden (Leeds, Friday) demonstrate how they were doing things twenty years before everybody else, Maiden play the first four albums for the newbies. Maiden were always going to be the massive draw for this stage, but the sheer unabashed theatrics and revolving backdrop wonderment makes for one of the most entertaining acts of the entire festival. Bruce Dickinson knows what they are; he's proud to be the leader of a band who can rock and still bring joy, whose onstage demeanour implies pantomime rather than boring rock star; an almost guilty pleasure to be revered by all.

Theatrically speaking, some bands are aware of their status and play off it in a way that makes them immensely likeable (see above). Foo Fighters (Leeds, Sunday), however, seem to think that they still are a serious rock band. Chugging through just over an hour of repetitive grunge, Dave Grohl is having the time of his life and theoretically so should we be. The problem is, five years ago the Foos still appeared relevant but it really is hard to escape their decline into a Supergrass-like role, only making sense in that festival environment and not even pulling that off with a great deal of aplomb.

Biffy Clyro stand once again on a Main Stage and at times look lost. The wind is always an enemy for a band who generally thrive in the sweaty atmospheres of indoor venues and it leaves us feeling mildly unfulfilled. Today doesn't feel right for Biffy; they should be ramming the Radio 1 stage as the sun is going down.

Incubus (Leeds, Friday) release one duff album and you think they've stumbled down the MOR path. WRONG! They play plenty from SCIENCE and it sounds as funky as ever, as tight as ever and makes their more recently recorded material slightly more forgivable.

Marilyn Manson (Leeds, Friday) plays 'The Dope Show' and we dance. A bit. The mega-expensive multi-screened backdrop to his stage set seems to flash "DRUGS!" at the Disposable Teens in the crowd throughout. What a cantankerous glam-rock-gone-'dustrial deity this Manson is; he'd be utterly fucking deplorable if it weren't for the tunes which, mostly, rock in a good ol' fashioned way - a clear highlight of Friday's Main Stage performers by a flamethrower's blast range and a true entertainer in nearly every way.

Dinosaur Jr. (Leeds, Sunday) bash out 'Little Fury Things' and for five minutes 1987 comes to the 21st Century. It's good, but not quite right.

It's fair to say that we didn't really watch Iggy and The Stooges (Leeds, Friday) as such; rather, we pricked our ears in their direction while supping on a paper cup of froth (the staff had the gall to call it a "beer"). They do – or is it "he does"? – 'I Wanna Be Your Dog' and for a few minutes everything in Leeds is retro-punkin' genius. Then, it's back to the cup of fizzy pop dressed up as booze...

It would, of course, be foolish not to mention this little band called the Pixies (Leeds, Saturday). We stood with no preconceptions, but the seemingly half-hearted, by-the-book retellings of the band's 'hits' were, for the time spent watching it, grossly disappointing. A warm crowd reaction however is easy when a band playing song after song that everybody knows - ask the Foo Fighters - but when they're played what can only be construed as a lack of passion it does feel slightly empty. Disappointing, yes, but not devoid of worth.