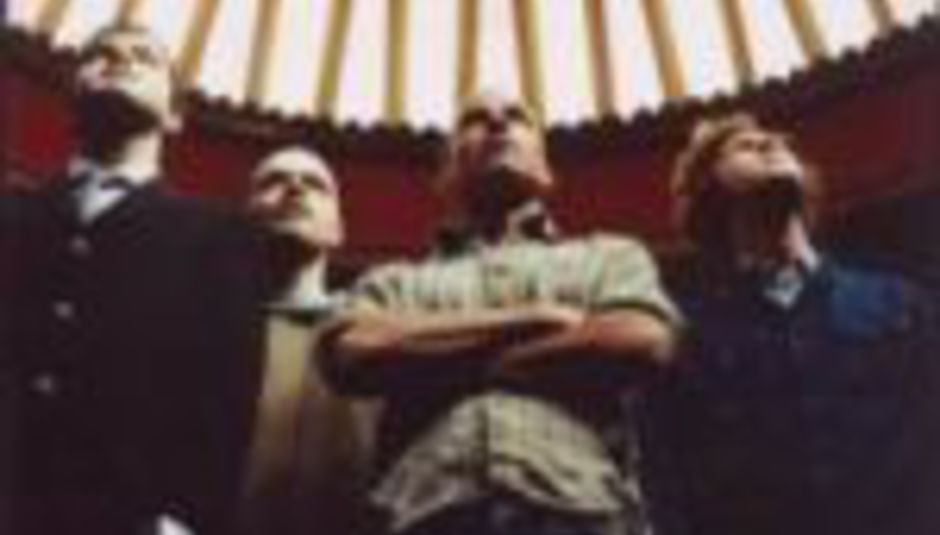 The Devil's in the Detail: DiS meets Brakes' Eamon Hamilton

The Devil's in the Detail: DiS meets Brakes' Eamon Hamilton

Eamon Hamilton, once of British Sea Power, is now at the helm of Brighton's punk-rocking mini-supergroup Brakes, along with Alex and Tom White, still of Electric Soft Parade, and Tenderfoot's Marc Beatty. DiS recently trapped Hamilton in a quiet corner, from whence arose the varied subjects of God and the Devil, their spanking new album The Beatific Visions, and getting the shits on stage. Well, almost.

There's always a big element of fun running through your music but you pack it with politics, too. What has concerned you enough to write about this time, for The Beatific Visions?
We're in pretty dark times at the moment and it's like a reflection, really. I'm not a big fan of war let alone the reasons and justifications for it, which seem to hinge on some idea of a God, and it's that that I'm trying to explore. Each side uses their God as an excuse to be inhumane to each other.

That is a large and controversial subject. How did you begin to tackle it?
I went away to Morocco and, while I was there, read a book called The Master and Margarita by Mikhail Bulgakov. It's a brilliant book set in the 1920s, about how the Devil comes to Moscow and how he just creates havoc. It's one of the best books I've ever read. That influenced the song 'Marguerita', but I was reading the Old Testament as well, that I'd never read. One of the stories that really stood out was that of Job. It's about what happens when God and the Devil get together to have this bet to mess up this guy's life and test his faith. In our song, 'Cease And Desist', I use that idea but let the Devil win instead.

Sounds like you've had enough of writing about the usual subjects?
Ha ha, people are still falling in love, which is brilliant, so some of the songs are about love and the benefits of love, really.

Talking of which, your title track is about a stunning-looking woman, but is she really that lovely, and are you going out with her?
Ha ha, um, no. Not really. Well... not anymore but, yeah, it was an idealised version of her.

That's the best way to see things, isn't it? First thing in the morning doesn't always work. Does that cool pub gambling room pictured on your cover actually exist? It looks like a film set that's been constructed to look uber-authentic, and I can't work it out.
Yes, it is real. It's called Trisha's and you can find it in Soho. It's been in this same Italian family since the 1940s and it's one of those late-night drinking places.

You recorded this album in Nashville with Stuart Sykes, who has also produced The White Stripes and Cat Power. Did that experience have a marked effect on the way everything came out and how you approached actually making the album?
Yes. With making the first album, Give Blood, we knew all the songs really well, having toured them for a while, so we just went in and bashed the album out in five days. Whereas with this one, we were still rearranging the songs and coming up with better ways of doing them as we started. We also had a producer who was a bit of a taskmaster and he made us do take after take. So yeah, it was a different approach to recording and we took more time over it, like two and a half weeks. It was a luxury! America and Nashville seeped into our consciousness and we had a brilliant time there. Not only that, but one day while we were recording Cat Power called by. Wow!

If The Beatific Visions came to full fruition in the studio, do you think of yourselves more as an 'album band' now than a 'live band'?
We were always a live band before, but we've done two albums now and we enjoyed it. But live... you can't beat live! You get an immediate response to a tune, and if it's not very good then you know it immediately. Last night we played London and we hadn't played for about a month and I was shitting myself. It was pretty nerve-wracking. Everyone said it was great and they were all having a great time but I just have to learn how to hide my own insecurities.

Playing live is no mean task. It can be emotionally slaughtering to put yourself out there but people want to do it. It's mad.
It's a good thing to do because it's a cathartic process, but I tell you: it pulls up all the emotions that are in the songs each time I sing them, so it's quite an output and it's pretty exhausting. But yeah, it's so much fun and just making such a loud noise is brilliant.

Brakes kick off an eight-date UK tour in Cardiff on November 28 - click here for dates. The Beatific Visons is available now at all quality, and some not so quality, record retailers.