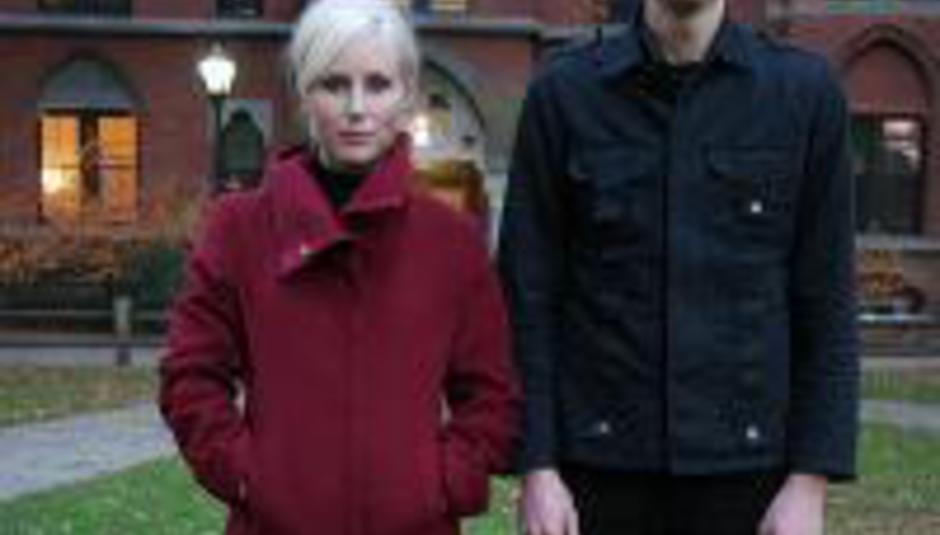 Mates Of State conjure sublime indie-pop songs from the simplest of elements: one member plays a keyboard (or two), the other a drum kit. No guitars are employed, making for a quirkily irresistible sound that ticks all your dancing shoe boxes, but also possesses a lyrical depth uncommon in such packages.

The pair – Kori Gardner (keys and vocals) and Jason Hammel (drums and vocals) – have been playing together since 1997; they married in 2001, and now have a daughter, Magnolia. Being parents hasn’t prevented them from either touring or recording, though: the band’s new album, Bring It Back, is out now on Moshi Moshi (on Barsuk in the US) and the Connecticut-based pair play London’s King’s College tonight. Yes, this very evening. You should probably go; I know I will.

DiS caught up with Hammel ahead of the band’s London date via the wonderfully impersonal medium of e-mail. Still, if you’re a wise sort, you’ll see and hear them in the flesh alongside these eyes and ears this very evening. And dance. A lot.

Hello Mates Of State: how are you, as of this precise moment?
We're in Amsterdam, we're great.

I recall seeing you at the Barfly in Camden in… gosh, I’ve no idea. Seems like a long time ago. Do you generally get to tour abroad as much as you’d like? I guess having a young child can be a hindrance in this respect…?
After November we will have come to the UK three times in about six months. And overall that'll be six UK/Europe tours. That feels like a lot actually, although we'd come over more if it was as easy as touring in the States. Having a child just shortens the length of time we can spend overseas.

Does it make a difference, now, having an album properly released in the UK, via Moshi Moshi (link)? How did Bring It Back come to be released through the label, and why is the British version different, in terms of both artwork and tracklisting? (There are two bonus tracks, yes?)
So far there really isn't a difference in our tour attendance or anything except people can actually buy our records properly thanks to Moshi Moshi. We've been such a grassroots band, building our own audience based on word of mouth over here, so although it feels great to say we're signed finally, the same people who have been supporting us all along are the same ones supporting us now. Moshi wanted us to have a slightly different release (artwork, bonus tracks) so that's what we did. After all, they were the first real label (aside from tsk tsk, who released our first record out of a small apartment in London, link) to care about us over here, so we kind of did whatever they wanted.

Did the label’s work with Tilly & The Wall - who they’ve successfully marketed here - affect your decision to go with the label at all? I suppose the two bands are similar in the respects that both play pure pop songs and both feature male/female vocals… Do you actually get compared to any specific bands on a regular basis?
We really didn't have a clue that Tilly & The Wall was doing well over here except from what Moshi said. We just trusted their (Moshi's) reasoning and also we are friends with Hot Club De Paris, who suggested us to Moshi (and Moshi to us). We don't get compared much to anyone in the US anymore because we've sort of proved ourselves after being a band for eight years and sticking to our own style, but in the beginning, when there weren't many other duos, everything written about us mentioned The White Stripes or Quasi. That obviously sounds silly now, but I guess we could be some weird alter-ego of them.

Since the music that surrounds your words is often simplistic, albeit not minimal, do you think a greater connection with your audience is made via the lyrics, rather than the instrumental arrangements?
I don't know what the audience connects with but I hope it has something to do with the simple, or more intimate, genuine nature of what we do as a duo. I know it's not because what we do is normal or hip.

When writing a record, do you have an idea of how many ‘slow’ songs there will be, and how many upbeat, dance-friendly offerings will be included? How do you strike a balance - is a decision on sequencing made after everything’s recorded? On the new album, for example, I love where ‘Nature And The Wreck’ falls, straight after the dizzying ‘For The Actor’…
When we write individually, we tend to write more mellow songs. So far only a few of those have made it onto our records. We definitely like to think about placement. After people are feeling like their heads are spinning or they are too sweaty from dancing, we throw a slow jam out there. In sequencing a record, we try to look at it as if every time someone puts the record on, they listen from beginning to end; more of a ‘whole picture’ sequence than a ‘front loading’ approach.

‘Fraud In The ‘80s’, too, is a wonderful pop song: where do you take influences from when constructing such a song, something that can whisk the listener away from their ills quite magically, albeit for four minutes? Do you see/hear your music as escapism? I guess the songs’ subject matters are rooted in reality, but you’re hardly a gritty band… if you get what I mean…??
Well our songs are certainly an escape for us. That's why we make music. It takes you to another place while you ponder the realities of your life. It is therapy for us. Sometimes songs can be darker and do this and other times they can be joyous with the same effect.

Have you been able to play a wide variety of bills? I came to the band via more punk-styled bands, but I don’t suppose you’re regularly playing hardcore shows!
We don't ever play the same kind of bill it seems. We've played crusty punk shows to people rolling around on broken glass and we've played birthday parties with bean dip and cupcakes. We've played with great bands that sound like an entirely different breed of music and it somehow fits. I would hate to always be billed with the same-sounding band. I think most bands hope, as we do, that fitting easily into a genre is not a great thing. I hope it's hard to classify us so we keep getting to play with all types of bands.

Finally, what should any fans bring you at the King’s College show? Are there any home comforts that you have to leave behind that maybe you’d like, if only for a couple of hours? What’s your poison at the bar?
Got any spacecake or cabernet sauvignon? I really miss our daughter so anything for her is always welcome. I miss my sweatpants. This is the first tour without them.

So, got a spare pair of sweatpants? If so, take ‘em along this evening. Tickets are still available for the show – click here for details; the band then tour with We Are Scientists. Mates Of State’s Bring It Back album is out now on Moshi Moshi; a single, ‘Like U Crazy’, is released on November 13. Mates Of State’s website can be found here, and their MySpace page here.