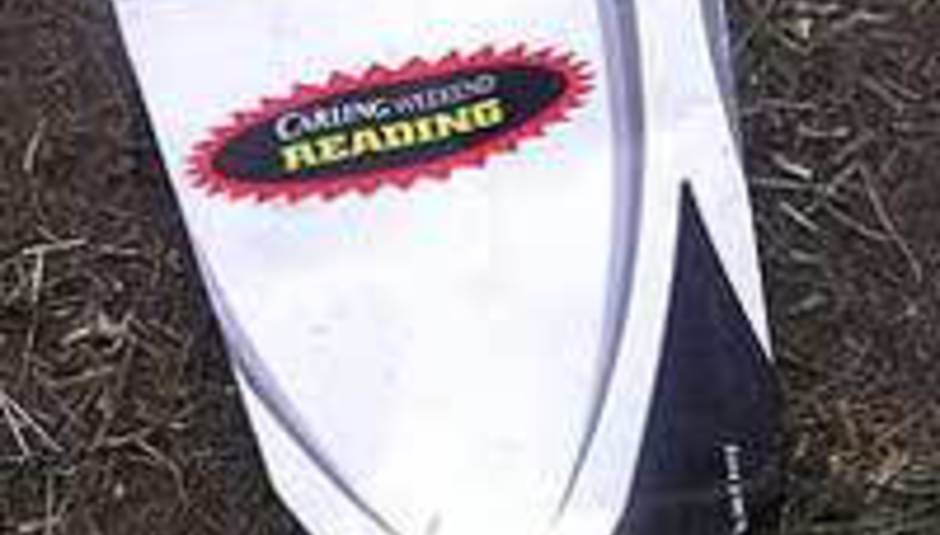 How is Reading Festival fun? It is attended by a disproportionately high amount of hoodlums, yobs and bastards, the price of the low-quality food is astronomical, the sound quality is STILL nothing less than awful for most of the weekend despite this being its one-millionth year and the whole thing is booked, sponsored and run by big corporations, yet somehow it maintains an air of excellence year upon year.

For example: even in the face of one of the most boring Friday line-ups in the history of the world, there’s fun to be had at the Lock Up Stage as temporarily-reformed Derbyshire ska bandits Lightyear race through forty minutes of sometimes political, often nonsensical punk rock. Frontman Chas Williams enters the stage in just stripy boxers with a video camera taped to his head, and neither stay attached very long. A trumpeter climbs the tent’s central scaffolding (nervously), a pantomime horse is deployed and, come the set’s climax, three naked men appear from backstage to accost the band. Fun.

The Main Stage is currently home to more hairspray than the 1980s metal scene. Towers Of London are a perfect example of style over substance. Not surprisingly a lot of the kids in the crowd look as up their own arses as the band. Balls to their crazy antics and glam-punk-rock stylings, many more capable and freethinking bands have made statements like this before and sounded a damn sight better. They are not as bloody cool as they think they are.

Terrible, terrible sound on the Radio 1 Stage makes it difficult to enjoy The Long Blondes to the full but we've seen enough before to know they're a quality outfit. With new single 'Once And Never Again' and a debut album both out shortly it promises to be a winter of anything but discontent for these Sheffield glamour pusses.

Leeds based five-piece The Pigeon Detectives seem to have caused enough of a stir of late for everyone to be really excited about this show. Frontman Matt is a bit of a charming character and the boys successfully belt out some feisty indie-rock songs to an amazing, writhing sponge of an audience.

Guillemots play an even-more-acoustic-than-usual set in the ultra-exclusive Tiscali Tent to a heaving mass of chancers and wannabes. While the hype machine has been in overdrive about this band, many have failed to realise that this band exemplifies everything that is terrible about life. While one man helpfully described the allegedly multinational quartet as “cottage cheese”, another wondered why they sounded like a watered-down version of a Deep South preacher man if they were from London. The question remains unanswered.

Panic! At The Disco play to a front section crowd that look like clones of themselves - freaky. They have grown in numbers significantly today with the addition of extra keys and violins, giving them a much meatier and real live sound than before. Sadly there are foes as well as friends in the crowd and singer Brendan Urie is knocked out by a two litre Coke bottle that definitely wasn’t full of anything close to being cola. It’s a very worrying signs of things to come from the rather emo-unfriendly crowd that has assembled at Reading.

However, despite Panic! having really bloody fun songs there is something about the whole live set up that doesn’t quite work. Cheesy emo-pop always sounds better on record though, doesn’t it? No. The Subways are up next on the Main Stage and somehow, with profanities slipping from their nubile lips every other word, they manage to storm through a massive set with the crowd firmly on their side.

If ever a band were the aural equivalent of Marmite it's Gogol Bordello. Most go wild for their dancefloor-filling gypsy-punk, while those who don't look disgusted. We're in the former camp, and would encourage you to join us. It's good for the soul, y'know.

I defy anyone to stumble across a Fallout Boy show and not grin from ear to ear, their energy alone will do that to you even if you are laughing at them. In a blaze of guitar acrobatics they belt out their singles consecutively and the crowd can hardly contain themselves. After being pelted with litter of all manners for some time, the emo warriors took it upon themselves to clean up the field in front of them and challenged the crowd to pick anything up that was soft and could be thrown. Then they played ‘Sugar, We’re Going Down’. It looked like it was snowing hamburgers.

Starting, rather flummoxingly, with a trio of doppelgangers, Yeah Yeah Yeahs’ relentlessly vigorous show spins, points and yelps itself hoarse until settling to some extent with a scrumptious acoustic translation of 'Maps' , leaving Karen O visibly shaken in her eyesore of a green dragon dress.

Hundred Reasons are one of those bands that seem to have been around as long as some of those hamburgers. Don’t get us wrong, they put on a good show, Colin is as much of a sweetheart as ever but after a few naff releases post their pretty awesome first album, leading us to know fewer of the songs, it seems they really have too many ideas above their station. It’s the saddest thing to happen but we don’t care so about Hundred Reasons anymore.

Howling Bells have been in the UK a lot recently but we're still enamoured with their brooding Australiana. Again, they take us on a trip to tune city via the Carling Stage with 'Setting Sun' and 'Low Happening' particular highlights for the predominantly male crowd. Forget it, guys, she's already taken...

A headline slot kicking off at 7.30 doesn't seem quite right, and many here would much rather be watching Stoney perform 'Jailbird' on the Topman Unsigned Stage in the dark. Why isn't he signed? Why is this stage only found in Leeds? Why does he always insist on stripping?

Just like seeing Radiohead and The Rolling Stones, you need to tick Bodycount off your list of bands to see. They are inexplicably listed as ‘featuring Ice-T’ despite the fact that the veteran legend rapper IS the band, they plod away with some disgracefully generic rap metal that is as wonderfully comforting as it is painfully boring. Come on, it’s Ice motherfucking T!

Good grief... this must be what happens if you eat too many Happy Meals. Watch out kids, don't end up like Craig Nicholls – eat your greens and don't front a hype band. We'll admit to loving The Vines' spiky debut album but that was 2002 and this... well, this is just a sad end to a once promising career.

What do you mean you’ve started without me? Thankfully, Dizzee Rascal has the manners to wait, and delivers with a set that bounds with beat’n’bass. Two MCs and one DJ in no way struggle to claim the tent, and by the time the Newham Generals march from the rear and ‘Stand Up Tall’ ends proceedings Dizzee’s smacked my work head into shape.

The Twilight Singers found rain to accompany them, not that it was needed with the soaked and stirred missives of an unsurprisingly Afghan Whigs flavour, duly aided by Mark Lanegan’s liquor gold vocals on 'Where Did You Sleep Last Night'. Poised, ripened, covered in hope, this is the tang of time honoured blues men at their peak - a truly refreshing spectacle near the end of a very average day of music.

Smirking hoodrats pour from the tent, before it promptly refills with hairier brethren for Primal Scream. I have my fingers crossed for a set like that written in the tracks of their Live in Japan long-player, but instead of opening with ‘Accelerator’ they choose to set the tone with ‘Movin’ On Up’. Accordingly, I choose head-bobbing over hectic madness and leave before the godawful ‘Country Girl’.

Franz Ferdinand’s disgustingly contrived dance-indie is the truest example of why Reading is looking so shitty this year. A band whose stay at the top of the popular music tree did not even last until they headlined the biggest festival of the year. A band who have already fallen from whatever grace they once claimed – is this really the best they could find?