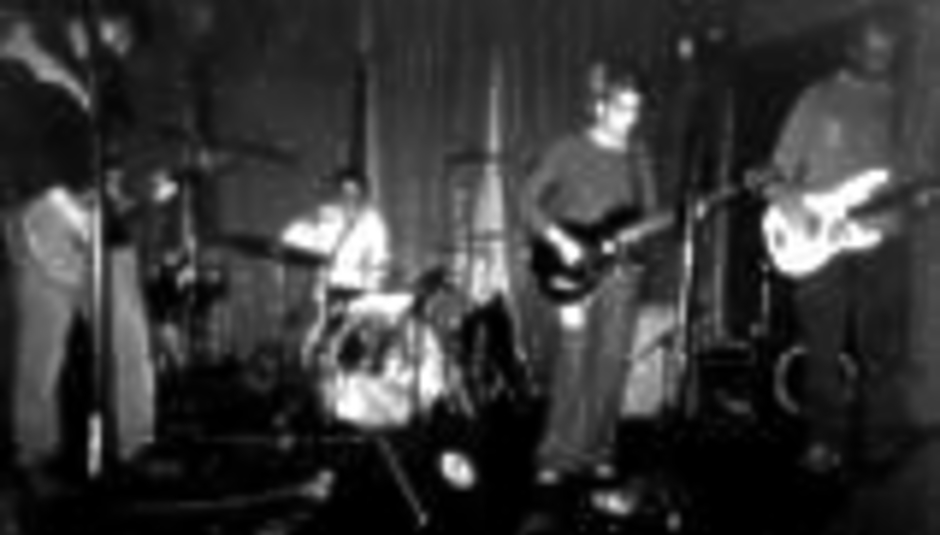 For all I know Jet Johnson could be aliens with bulging eyeballs and pink and purple glittery stripes. They could be very twee and look like Belle and Sebastian. Or to buck the trend they could be Amen in disguise showing off their “sensitive” side. I wouldn’t know as this interview was conducted across several telephone lines and just as many computers. So floating in the ether lets start off by asking

[in the style of Cilla Black] What's yer names and where do you come from (and how did you meet and how many records have you released and is it true that Gavin is moonlighting in about 3 other bands?)
From aeons away we get this answer ”we are:Caroline Nesbø from Aalesund, Norway who met Gavin Baker from Frome, Somerset at a gig Caroline was playing and Gavin was charmed enough to grin madly at her all night until she pitied him and took him home. They have been living happily together ever since.

Hywell Dinsdale is from Hyde, Manchester and was brought into the world by Harold Shipman.

Ian Scanlon, is from somewhere in the middle of England like Shropshire or Herefordshire, he put Jet on at the Garage Upstairs and volunteered to take over on the bass when Kev Penney couldn't do it anymore.

Caroline plays in Lupee Velez with her friend Guri Hummelsund, both released a single on Fierce Panda as Peachfuzz.

Gavin plays in Billy Mahonie and Glider. Billy M have released a fair few singles and an album called The Big Dig. Glider have had two singles released and have an album due for release this summer.

Hywell plays in BM as well. Also he is one third of the I-Ality Hi Fi a dub and roots sound system operating from Hackey.

Ian plays in Econoline and has just released his second single called Breakfast of Champions. He is also top man promoter in London and UK with Damn You!

Phew that sounds as though you’re a band of serial moonlighters.

What plans are there at the moment gigs and release-wise?


1. Something About the Ocean'
On The First Push of The Rolling Pram compilation album, Roll Push Move Records RPM001. Is being distributed by Cargo and should be out now and will be orderable from Norman Records http://www.normanrecords.com/

2. That's How It Goes'
On the No Objection compilation CD Big Scary Monsters Records. Out now http://www.bigscarymonsters.co.uk

4. split single with Grover
Big Scary Monsters Singles Club: As The Duck Bit Back will be released in the summer. http://bigscarymonsters.port5.com/duck/

And now predictably it’s time we asked: What are your plans for world domination?

They involve chemical warfare and snuggling a white cat but are on hold at the moment.

Who do you think would do a good cover version of your songs and why?

Kings Of Convienence could do That's How It Goes. Because it is cheesy And I'd like to hear Rothko play Something About The Ocean! Because it deserves triple bass action.

Caroline: Food, not being able to find anything to wear in the morning, books on science preferably physics. Gavin: Time, being in places that I haven't been to for years and years, journeys, fiction, fifties modern jazz, the fear.

If you were playing Fantasy-make-your-own-band-up what would it be called and who would be in it?

Gavin do you take Jet Johnson as seriously as Billy Mahonie?

Whats the latest with the Billy Mahonie album?

Due for release on southern on August 28th 2001. www.southern.com It is entitled What Becomes Before. It comes in a double vinyl format.

Do you have any pre-gig superstitions and what are they?

What one question would you most like to be asked in an interview?

Do you believe in the connection between Buddy Holly, Rocky Erickson and 13th Floor Elevators and The Butthole Surfers in terms of Texan rock music.

And what does your dad say about that?

Gavin: Well my dad and myself both agree that you can trace a clear line between Buddy Holly (the first great singer songwriter in rock music really) and Rocky Erickson.

The influence of Holly on Erickson is includes Erickson's rhythmic guitar style, Erickson's singing is melodically very similar to Holly and Erickson's phrasing owes a lot to Holly. Erickson also covers some Holly tunes on a couple of acosutic live cd bootlegs my dad has.

The link between Erickson and The Buttholes is slightly less musical!: both liked taken acid!! Acid has been an important influence on both The Buttholes and Erickson.

Erickson recorded an album from King Coffey's (Butthole's drummer's) label, Trance Syndicate. Buttholes also do a 13th Floor Elevators cover on some compilation album. Some of the very early Buttholes recordings can be argued to have elements of the prmimitive garage rock that the Elevators played.

So there you have it!

And there we have it indeed as the cosmic cyber space waves begin to dim and Jet Johnson, monsters or otherwise, go off and make 'emselves a cuppa tea. Or something.