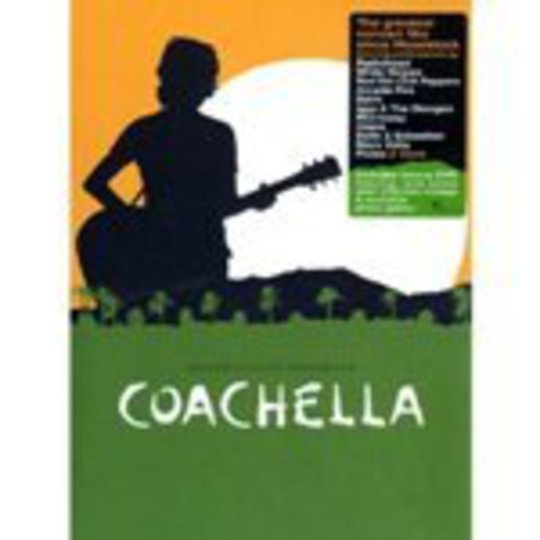 “The greatest concert film since Woodstock,” proclaims the sticker adorning the cover of this attractive two-disc presentation of Coachella, the previously-in-theatres film documenting the comings and goings of performers and punters alike at the annual festival of the same name, held in Indio, California. It’s a bold statement, and a look at the artists captured on one of Coachella’s numerous stages reveals many a potential highlight: Radiohead, Björk, The White Stripes, Arcade Fire, Kool Keith, Pixies, Iggy and the Stooges and The Mars Volta are present, and each delivers a single song (Pixies excepted, who are granted on-screen time enough to play two songs) of utmost excellence. However, Spearhead? Oasis? Fischerspooner? The Crystal sodding Method? Hmmm…

But Coachella doesn’t focus solely on live performances – if it did, the hour-fifty-seven running time would be halved, at least. Cameras wander away from the festival’s bustling main arenas and into the camping compound, capturing tents being buffeted by extraordinary winds and attendees rising on the second day’s morning, bleary eyes soon fixed by the always-shining sun above. It’s the weather, actually, that proves to be the film’s true star; that and the landscape that encompasses the festival site – purple mountains and orange skies, palm trees and wispy clouds of purest pink, a billion stars and the biggest moon outside of a science fiction novel. Although the heat must surely be an obstacle for early afternoon performers –* Saul Williams* and The Polyphonic Spree are but two of the acts caught in unforgiving rays, the latter’s many white robes touching sweaty see-through status – come each night’s spectacular sunset any lethargy is dissipated. Cue great sets by Belle And Sebastian (‘The Boy With The Arab Strap’ features here) and Arcade Fire (‘Rebellion (Lies)’), and a rather dull, but affecting for those in attendance no doubt, showing from Bright Eyes (‘Lua’).

Throughout the film, much emphasis is placed on the contrast from act to act, on the rich variety of music available for consumption – Oasis’ many gesticulations segue into* Björk’s absolutely arresting ‘All Is Full Of Love’, one of the film’s few ‘I wish I was there’ moments. Also contrasted, cunningly via deft editing, are the attitudes of particular performers as to music’s power, its ability to shape opinions and alter perception. Saul Williams ‘argues’ with Noel Gallagher, and it’s the Brother Grim, whose claim that nobody goes to a gig to hear someone read the news, who’s left looking the loser. Of the electronics-orientated performers, *The Chemical Brothers’ ‘Music Response’ fills the sitting room as easily as it does the huge tent depicted on screen, and Squarepusher’s brief flurry of blastbeats early on leaves a lasting impression. Zero 7’s dull AOR dance closes the film on a downer, though, and The Crystal Method’s apparent popularity Stateside simply puzzles. The duo have always sounded like a second-rate Ed and Tom on record, and this live footage does little to change this opinion.

Disappointingly, the main sequences of Coachella are interspersed with split-second shots of other, perhaps more interesting bands: we see Bloc Party, we see The (International) Noise Conspiracy, we see …Trail Of Dead. Ash are interviewed, as is Mos Def, Josh Homme and Beck, yet we’re not allowed access to any actual performances from said artists. The bonus disc merely features interviews and pictures – it would have been nice to see these didn’t-make-the-cut acts in full flow as a DVD special feature.

But we do get ‘Planet Telex’. We do get ‘Hotel Yorba’. We do get ‘I Wanna Be Your Dog’. We do get ‘Where Is My Mind?’, even if neither Kim nor Frank can wipe a look of complete boredom from their faces, despite the plaudits of their peers. We get a good impression of a festival that’s fast becoming an American institution, a la Glastonbury here, and seemingly doing so organically – one organiser explains its roots at the beginning, and Reading-esque it is not.

Well edited, nicely sequenced and often beautifully shot, Coachella works wonders as a promotional video for a festival that will surely grow and grow. As a collection of musical performances, though, it’s as erratic in quality as an episode of …Later. Your skip button will be used… repeatedly.