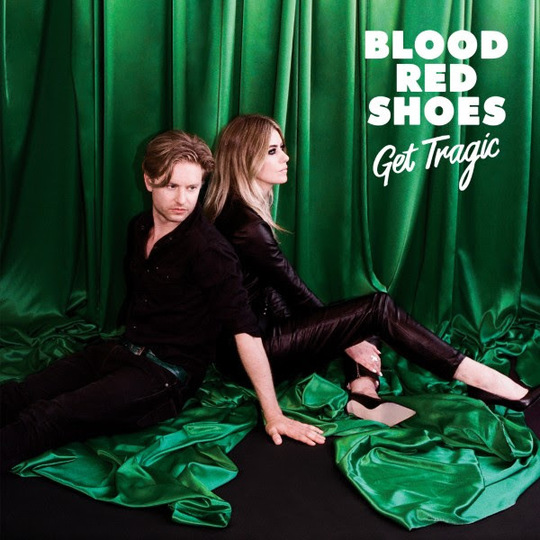 One thing we know for sure, albums written by bands in conflict fucking rule. Whilst Fleetwood Mac’s Rumours is the obvious choice, I’d point you in the direction of Abba, Smashing Pumpkins and even The Beatles. So, to contextualise Blood Red Shoes’ newest offering, Get Tragic – you have to know the back story.

‘We got to the end of the fourth record and were like f**k you, I never want to see you again’ reads the press release. Vocalist and guitarist Laura-Mary Carter subsequently packed her bags, walked out on and hopped on a plane to LA to find her fortune, ditching her musical partner Steven Ansell. But luckily for us, the story doesn’t stop there. A breakdown followed a tumultuous six months of, as Carter puts it, ‘drugs and clubbing’ during which our glamorous heroine was conscious of the absurd cliché of her situation – and from this was born Blood Red Shoes’ newest album’s title, Get Tragic.

Whilst it could also be seen as cliché, then, for an indie-rock band to grow up and release an electro album; the fact that Carter fell off a bike and broke her arm (so literally couldn’t pick up a guitar) may have been the best thing to ever happen to Blood Red Shoes. Because Get Tragic, quite candidly, is a virtually perfect record. There’s nothing about it that’s out of place. It draws on the best parts of the band’s past history, catchy choruses, glam-rock guitars, electronic riffs that don’t leave your mind for days, mind-blowing lyrics – all combined with a glamour that lurks at the edge of the hometown you escaped, as the sun slowly sets. Like Carter’s experience in LA it’s intoxicating, acerbic, ambivalent and oozing with LA glamour fuckin’ hella cool.

‘Eye to Eye’ is the sleazy electronic opener – a confession of what happened to drive the duo apart. Suitable for a convertible in the sunset, and maybe some wayfarers, it’ll lace you up like you’ve taken too many benzos and draw you into the narrative of the album before you even realise, and you’re invested. Then, before you know it, you’re trapped. But, trust me, that is not a bad thing.

‘Mexican Dress’, our second track – and the single you might already know, assures us the rock roots are still there. Heavy distorted guitars of the mid-Noughties combined with spacey synthesisers. It acts as an immediate balance to the opener – highlighting the absurdities and intricacies of the LA scene carefully. It is glamorous or tragic? It’s ours to decide.

‘Bangsar’, my highlight, and arguably the closest to the band’s tour de force ‘It’s Getting Boring By The Sea’ – an electro-rave makes-me-feel-like-I-popped-a-pill masterpiece that contains the lyrics “I don’t want your number/I don’t want your business card/ I was just looking for the last bar in Bangsar” and “I don’t need this/ throw me out the window let me with the big fish” that you’ll find yourself humming absentmindedly for days.

Honourable mentions - ‘Anxiety’, which comes after an Interlude in which the subject matter of the album moves away from the LA scene – that manages to both educate and encapsulate the feeling of being anxious whilst being a fuckin’ banger (“Honestly/I could take a chance but it terrifies me”). ‘Howl’ – “I’ll be waiting on my own, I’ll be waiting dog and bone”. ‘Elijah’ - “I heard you fucked up again Elijah/one day you’re up then you’re down/in this old town” – we all know a fucking Elijah. FUCKING ELIJAH.

In short – someone very dear to me once told me that artists are artists because they can convey in words what others can’t; and that that’s what makes them beloved, and beautiful. It would have been so easy for Blood Red Shoes to part ways as enemies, to never speak again, to start solo careers and guest on documentaries about band rivalries and sure, they would have been okay – but instead, they flourished. They gravitated back together. They healed, they argued, they made music about it and to use an LA phrase - ain’t we lucky they did so.