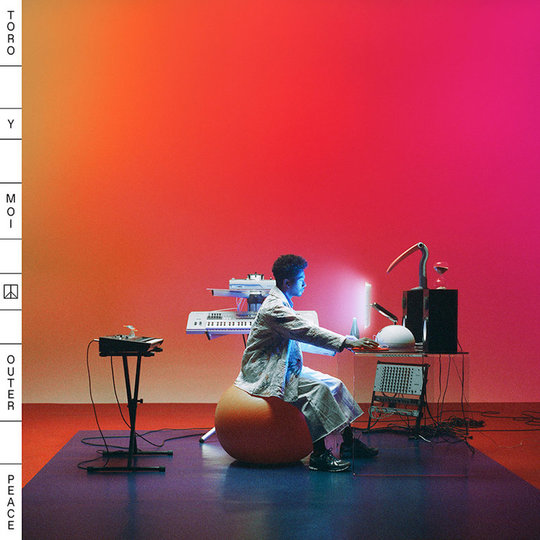 At 32-years-old, Chaz Bundick aka Toro Y Moi is far from the age where he could be considered precocious, but his consistently trailblazing work is nonetheless remarkable in scope.

Ever since the torrential and ingenious 2009 debut album Causers of This, Toro has stockpiled his relatively condensed career with one devastatingly sublime release after another - each displaying a cornucopia of avant-garde experimentalism, audacious sonic feats, and venturesome production. His last foray into the abyss was 2017’s instrumentally dense and emotive Boo Boo, which saw Toro augment his arhythmic stature with his most confessional offering to date. But for all the praise Boo Boo received for its penchant to indulge, Outer Peace is mostly a much less somber affair, abandoning the more austere introspection for a somewhat whimsical, childlike side of Toro that we have only previously witnessed in sporadic doses.

The most glaring ingredient in the album’s kaleidoscopic fold is the influx of collaborators, as Toro is more traditionally regarded as a solo practitioner. Following a move back to Northern California after a one-year-stint in Portland, Toro treats Outer Peace as a homecoming party of sorts,, extending an invitation to friends and credentialed peers to participate in the boisterous festivities. Starry-eyed additions like ABRA, WET, and Instupendo pad the liner notes while Toro implements a variety of off-kilter mechanics all throughout the ten songs presente - proving to be more of the consummate musical provocateur than some of his even more dauntless efforts of the past. Still mostly operating in the chillwave realm, Toro aligns his potpourri career trajectory with an onslaught of dancier pop and funk melodies.

One of the most engrossing aspects of Toro’s contemporary arsenal is his unceasing dedication to his evolving vocal prowess, and his singing chops are on full display on “Ordinary Pleasure.” An earthy, kinetic energy drives a thumping ambiance, and Toro supplants an added layer to it with modish crooning in just the right increments. On the flipside, “Freelance” is a more cooled deviation, with Toro once again manipulating the full range of his beseeching singing-- all the while flourishing in an avalanche of bombastic timbres. As is Toro’s forte, the track is buttressed by a sleek, house-driven instrumental. Borrowing a line from Ariel Pink’s ‘Round and Round’, (perhaps inadvertently) the refrain of “It’s always the same as always” adds a ritzy polemic dimension to the synth-laden track.

Only a few beats in, and just as Boo Boo dabbled in the heartwarming arts, it’s evident that Toro is seeking a thematic cohesion on Outer Peace. According to Toro: ‘This record is a response to how disposable culture has become and how it affects creativity, While listening, you might pay attention or ignore - either way that's ok, this is music for a creative mind.’ For those creative minds that do choose to tune in, Toro endeavours to beget songs that waft between a bohemian dance-party soundtrack and soberly congealed meditations, but beneath that surface is a discerning commentary on a clamorous society and its associated ills, most clearly evidenced on a track like ‘Who I Am’.

As ever, there’s much to like here, from the flawless testament to musical symmetry on ‘Laws of the Universe’, the chilling jazz-piano chords of ‘New House’, the warbling vocoder utilised on ‘50-50’, and the airy breathlessness of the ABRA-assisted ‘Miss Me’. Coinciding with the overall evolution of his sound, it’s not a stretch to say that Toro is quietly approaching indie icon territory, and precocious or not, he might not even be at the height of his powers yet. With 2019 fresh upon us, hopefully the splendour of Outer Peace is an eclectic foreshadowing of a thrilling year in music.