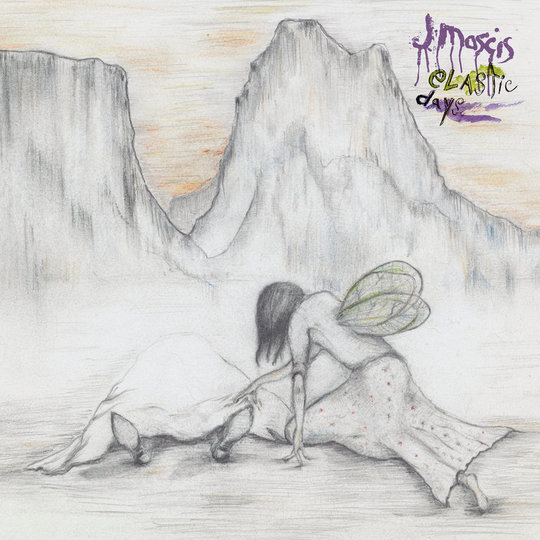 A solo J Mascis LP can feel like a bit of a hard sell these days. As the frontman for the long reformed Dinosaur Jr, J Masics is probably mostly known for his fiery shredding guitar solos and it is these, rather than his talents as a lyricist or the rather nasal whine of his singing voice that would bring most Dinosaur Jr fans flocking to a new release. So how well does his solo work come across, with a more stripped down feel to it, relying more on lightly strummed acoustic guitars? The answer is pretty damn well actually. One of the main reasons for this is that, although these songs are much more laid back and acoustic, J wheels out his trusty electric for a trademark solo at about the 2 minute mark of pretty much every track on here. It’s the sonic equivalent of ordering a salad rather than a burger and then finding that it’s been served to you with melted cheese all over it regardless.

Actually that’s a pretty terrible analogy (unless you like the sound of cheesy salad – in which case it works): the fusion of acoustic strum-a-longs and blistering solos feels much more natural and integrated than rocket-and-red-Leicester-surprise. One of the advantages of Elastic Days over most Dinosaur Jr LPs is that it is actually easier to pick out and appreciate the nuances of Mascis’s solos as they’re not fighting to be heard against the competition of the murk and bluster that often attends the more fleshed out rock tracks from his day job.

One of the other more noticeable differences on Elastic Days is that when J isn’t soloing his vocals are pushed much more front and centre than on Dinosaur Jr tracks. This is a bit of a mixed blessing: on the positive side J has maintained and developed a really rather sweet singing voice and he uses much more of a range more confidently than in his early days with Dinosaur Jr (in fact he’s recently been having singing lessons, perhaps a reason why he’s sounding more self-assured vocally).

On the negative side it makes his lyrics much more of a central part of listening to Elastic Days and while there aren’t any real clunkers, lyrics are still not his creative strong suit. Unlike someone like Kristin Hersh (like J a member an American singer-songwriters who has been doing this for multiple decades both solo and in bands), Mascis doesn’t have the ability to use specific references or arresting imagery to paint a vivid picture with his words. The lyrics on Elastic Days are mostly the combination of the same abstract nouns and well-used verbs blended in a rhyming dictionary and cast in the direction of an unspecified ‘you’, such as this example from ‘I Went Dust’: “I woke up/ Won’t you tell me/ I went dust/ don’t you sell me”. Elastic Days does have one or two lyrical treats in store though, for example in ‘See You at the Movies’ in which J intones in his best slacker drawl, “I don’t peak too early / I don’t peak at all.” J is still, however, probably the only legendary guitarist/songwriter who could give Kevin Shields a run for his money in the Song-titles-that-say-precisely-nothing awards (yes, there really are tracks on here called ‘Sometimes’ and ‘Everything She Said’).

Although the lyrics aren’t a high point, the music itself is consistently sparkling and not just because of the fretwork theatrics that break in at or around the two-minute-mark of most songs. I was initially planning to write in praise of the incredible rapport that J establishes with his drummer on tracks like ‘Give It Off’ and ‘Everything She Said’ until I realised that it’s J himself doing his own drumming (he does pretty much everything on here apart from a couple of discrete guest appearances on backing vocals). A lot has been written about J’s guitar prowess but, perhaps because he’s known as a guitarist, he remains constantly underrated as a drummer. The drumming on Elastic Days gives these mostly acoustic songs more backbone and presence than they would have without it and the nifty fills and high-hat lifts add just as much as the more showy guitar flourishes.

There are no alarms and no surprises on Elastic Days. J establishes a pattern - acoustic guitars, yearning vocals, electric solo all underpinned by energetic drumming – which he doesn’t really deviate from for the whole album. If you’re a Dinosaur Jr fan and you can live without a couple of Lou Barlow tracks per album then it would be well worth checking out Elastic Days and hearing J do what he does best in a slightly different setting.