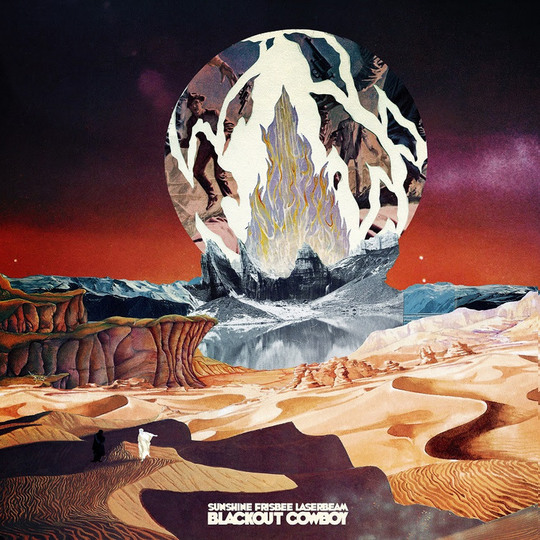 If reward and recognition were based on work ethics then Sunshine Frisbee Laserbeam would be one of the biggest bands in the world right now. Formed at the turn of the decade following the dissolution of former Drowned In Sound favourites Distophia and fellow black country noise punks Shocked Elevator Family. Sunshine Frisbee Laserbeam have been prolific when it comes to writing and recording from the word go.

So it comes as no surprise that Blackout Cowboy is their fifth long player since 2013's self-titled debut, and as with all of its predecessors is an excitable, mostly loud and boisterous affair that rarely pauses for breath. It's also their first long player as a five-piece and while the added personnel isn't instantly noticeable, it does allow each individual member to focus more precisely on the task at hand.

Comparisons to the likes of Mclusky, Future Of The Left and Urusei Yatsura are inevitable, which is no bad thing. Not least by way of the song titles, the likes of 'Meatloaf To the Camera' and 'Mrs JR Hartley' in particular screaming "ANDY FALKOUS!" in bold type. However, to claim Sunshine Frisbee Laserbeam are copyists does them a disservice, and anyone that's seen their live show will testify they're a rumbustious proposition in their own right.

Clocking in at just under half an hour in total, Blackout Cowboy makes its intentions clear from the outset. There's echoes of Favours For Sailors' joyous lo-fi in opener 'Running From My Ghost' while 'All The Way Over the Edge' could be the second coming of Urusei Yatsura in a parallel universe. Singing guitarists Pete Dixon and Andrew Bullock share vocal and six string duties throughout which makes for a viable concoction on the likes of 'Adult Memory Oww', a powerful slice of melodic punk reminiscent of Husker Du or Dinosaur Jr in their prime, fuelled by the inimitable chorus line "Together we can make new friends."

Elsewhere, 'Meatloaf To the Camera' takes an adventurous route through Daydream Nation-era Sonic Youth territory before taking on a whole new lease of life by the third verse. Essentiallyu a song in two parts, it epitomises both Sunshine Frisbee Laserbeam's playful yet deadly serious nature and encapsulates everything that's great about both band and record into five-and-a-half glorious minutes. Progressive yet never overwrought, it represents the album's central piece while highlighting future possibilities for its creators' next musical excursion.

The second half of the record is pure unadulterated joy, the accelerator pedal pushed down hard to the floor on 'Mrs JR Hartley' and 'MK Ultra'. Punk rock in ethos and delivery, they capture the band's live fury in all their glory. While closer 'Mind Control' is borderline Shamanic chant before the now familiar deluge of heavy riffs and riotous noise drive it to its natural conclusion.

Along with fellow Birmingham rabble rousers Table Scraps, Sunshine Frisbee Laserbeam have made a record that proves the spirit of DIY is alive, well and living somewhere off the M42/A34 axis.