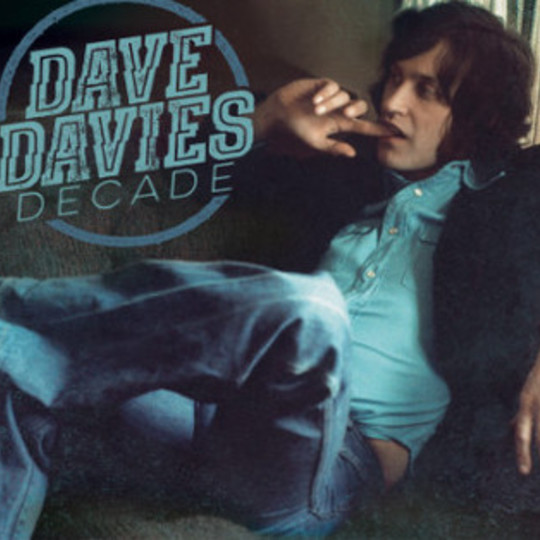 The Seventies were a time of turmoil and triumph for Britain’s finest rock n’ roll band The Kinks – beginning the decade with the eternally anthemic ‘Lola’, releasing a series of poorly received (but, as revisionism will tell us - secretly brilliant) concept albums, then returning to prominence with beauties like Sleepwalker and Misfits, this period will probably be best remembered as the decade when Ray Davies pushed the band to previously unseen levels of success on the road in the USA.

Yet, behind the scenes, while Ray offered up album after album of his material in perhaps his most prolific period, brother Dave Davies was working on material that he never presented to the band - in fact, a collection of songs recorded at the band’s studio Konk, that were only very recently unearthed.

Partly re-recorded, remastered and produced by Dave’s son Simon, Decade is an alternative history that throws up a ‘What If’ scenario for The Kinks in the Seventies that, had they paid more than lip service to Dave’s songwriting talents, may have led them down some quite different paths.

The record feels more like a Faces or Pretty Things album - more ragged rock, raw melody and jagged, off-kilter structure than the more traditional Kinks offering of the time. Funny thing is there are some absolutely massive tunes on here - the kind of stuff that, given the breath of the big band, could have been Kinks hits.

‘Give You All My Love’ combines singer/songwriter lightness of touch with Davies’ sometimes primal wail and early Sixties pure pop sensibilities. It’s a strange but delightful combination that recalls the power-pop likes of The Raspberries or, on shakier ground, Macca in his better Wings days.

Certainly there are some very recognisable Kinks-like moments - the pre-Big Star beauty of ‘If You Are Leaving’ and the melancholic ‘Web Of Time’ are gorgeous, rousing highlights while ‘Within Each Day’ provides a hymnal, dulcet moment of all-encompassing emotion; it’s extremely beautiful, disarmingly honest and, unlike some of Ray’s dives into character-driven writing, heart-on-sleeve in its sentiments.

Sure there are some dodgier bits - not even a Davies can save the likes of rock chugger ‘Mystic Woman’ which sounds precisely as you’d expect based on that title, and much the same can be said for the amateurish psych of ‘Mr. Moon’. But hey - it was the Seventies, right?

On ‘Shadows’, chiming twelve string leads us into an addictive folk-blues that builds into the kind of theatrical soundscape that marked much of his band’s work at the time - but, frankly, his innate sense of where to place chords to make them resonate and evoke emotion is incredibly clear on what some would dismiss as a rudimentary work-out.

Davies’ solo output would increase in the Eighties, yet like his day job band, the quality began to vary markedly. Here we have a snapshot of a time when he was at the top of his game - but overshadowed in the public eye by his brother’s more easily digestible (and, let’s face it, available) work. Let’s hope, should the proposed Kinks reunion become a reality in the near future that Dave’s material and invaluable contribution to rock music (he legit invented metal, ya know?) will be acknowledged on the big stage at last.