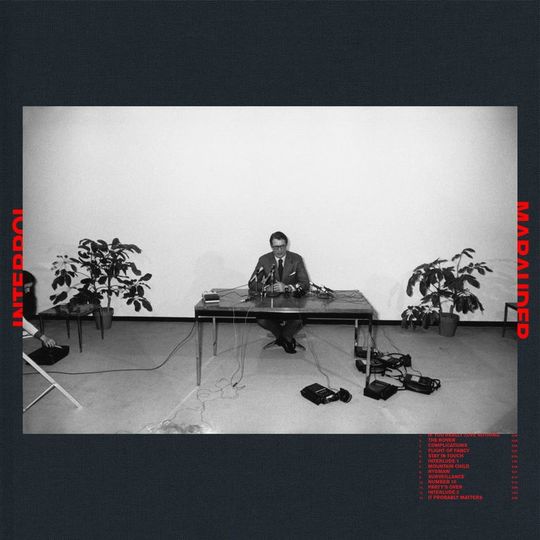 For me to talk about this record in the way I’m about to, you’ll need some context. Let me tell you with no uncertainty, that Interpol have been there, musically, physically (on a stage) for every major event in my life. Break-ups, break-downs, trauma and celebration all in one puzzle called my life, that truly beguiles. To recount them all would bust my already busted word limit, but two stand-out: -

The first. I’m 21. Longer ago than I’d normally admit. Alexandra Palace, 2007. Me and my oldest friend have four pints between us. Our university years had been hedonistic and glitter-fuelled – a band of 20 kids who imitated ancient Parisian Bohemians. Brian Molko, Marc Bolan. In that wide-eyed, fresh-faced way, what was only really about two years felt like twenty. We’d stretched our bodies and each other to the limit, yet – we were a family, strong and true, we’d fight and make-up and be this way forever….right?

At least, that’s what my friends thought.

What I thought, was ‘I’m fucking sick of this shit’.

So, I was going to leave. Gone. Vamoozed. Sayonara. I had to tell my friend; of course – and I had to tell him first. The Interpol gig was the first time we’d had alone together, surrounded by hundreds of others…and there was something about the cheerful demonic soundtrack, ‘Evil’, the cheerful nihilism that made me spill. I cried. We jumped…and in those sweaty, chaotic, bounce fuelled moments I understand the meaning of real friendship. “But hey; who’s on trial?”

The second, more of a conduit. It’s the shackle together of those puzzle pieces, scattered all over my life, points in the sky like nautical flares. A constellation of failed romances, other people more official or just more incredible than me – great golden pinpricks that I, the casual astronomer will later draw lines in between. In those dark, lonely, immature times I’d always turn to ‘C’mere’. The woe of my ‘NEVER GOING TO DATE AGAIN!1’ heart soothed only with an obtuse lyric quote and a Facebook post of the video. This happened with such great frequency that, and this is still the case (I just checked) at some point in the midst of another bout of malaise Facebook would flag my account as shitposting said video - and ban me from ever making the post again.

So why have I spent more than half my review explaining what Interpol mean to me? The answer is simple – I need you to understand the context behind the second part of this review. If they ever make a movie of my life, then ‘C’mere’ will play across the closing credits. My personal Interpol will always be the slick, sad, sunken Interpol. The thick rimmed glasses and tales of fated romance Interpol. Discordant piano-kiss strokes. I’ll fight you if you don’t agree that Turn on the Bright Lights is, and always will be, one of the best albums ever released – and an utter work of art.

But the thing about Marauder is – it is a work of art that varies entirely from TOTBL. The band’s sixth offer is undoubtedly stronger than their previous two; and some claim a return to a form that Interpol never should have strayed from. But I’m here to tell you that’s not quite the case. One word of warning though – be prepared to play with your EQ.

Because the secret of Marauder is this – it’s not really an album.

Nope. Not at all. It’s a musical-art piece that just happens to enter our dimension via stereo, with recurring characters, a structure so fragile it carries the threat to burst; and two ambient intervals.

We open with the foot-stomping ‘If You Really’. Quickly, we realise, the trademark discord drives on an opposite road from other Interpol releases – where discord previously felt sparse, it now creates a wave of sound, that crashes on the shore of the next verse.

‘Complications’ presents a more rocky face. We wonder, was this dug up from the back of Tom Waits’ reject shed circa-2002? It unsettles us, laces in a thread of unease ala Dario Argento – one from which Marauder never recovers.

The whole album is pregnant with a sense of mis-time, often only a half-beat or two off a click-track – which gives a feel of almost-yet-about-too-but-never-dead in the narrative.

Like a tarot deck, Marauder is better understood if you know where you are on your journey. Once tracks nine and ten roll around – the only two that could possibly be found on other releases, we realise, we don’t want the slick sound back. We love our grown-up Interpol, still kings of cool – and Marauder shows that despite a return to a more classic sound, the band can still show up with a sound a little new.

Something special happens when I close my eyes. I don’t experience synaesthesia much, but with Interpol – it’s frequent, intense and only ends when I open them again. The most beautiful light show. For me, Interpol are kaleidoscopic green and blue blurs that turn into hills for micro-seconds before they’re enveloped by golds, silvers – music to astral project too.

Because that’s the crux of Marauder. Treat it like a work-of-art, you might be moved to see shapes too. Treat it like a comeback album, and you might find you miss the point. Open your minds, your ears, your energy - and it will show you incredible sights.