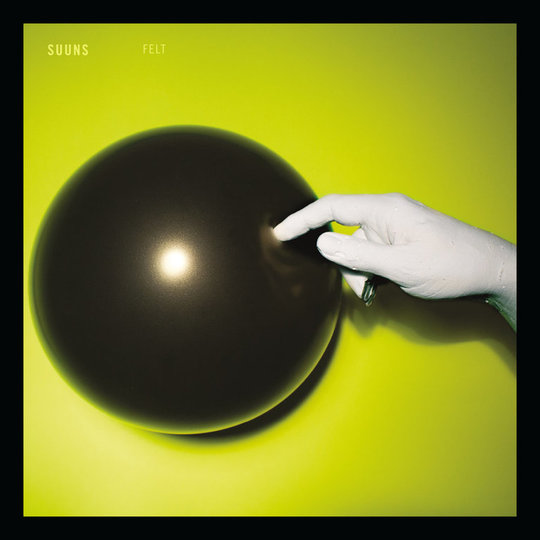 Cast in bleak and impenetrable blue light, the music of Montreal’s Suuns could be a fitting counterpart to the most perplexing Scandinavian TV thriller. Through the opacity you can make out a few shapes - scrambled, martian guitar phrases played with little regard for pitch and tempo, bubbling analogue synthetics busying themselves like ants, and most clearly, the teeth-gritted drawl of vocalist Ben Shemie - a complex and often confusing protagonist.

Like those subtitled Arctic murder mysteries, Suuns have proven not to be to everyone’s taste. One man’s minimalism is another’s boredom, so to speak, and the four-piece have tightroped between the two staunchly and nervelessly since their inception in 2007. Their oddball riffs and head-scratching effects are no doubt the result of boundless rabbit holes of knob-twisting and button-pushing - they commit to a mood without compromise, whether you like it or not.

There’s a lot to unpack on a Suuns record then, for those who stay the course. Hold/Still, from 2016, and its predecessor Images Du Futur hung their hats on a robotic take on new-wave and post-punk, borrowing the rigid mechanics bands of like Kraftwerk, Can and Clinic and propelling them into the distant future. Their lead singles constitute the band’s most rhythmic and propulsive moments - ‘Translate’ recalls the driving, skittering energy perfected on the first two Battles records, whilst the throbbing four-to-the-floor and punishing pitch-bend of ‘2020’ distills their weirdest tendencies into something close to digestible.

On Suuns part IV, the fluorescent Felt, the band continue much in the same vein, with a few notable tweaks. Lead single ‘Watch You, Watch Me’ sounds like ‘Translate’ through blown speakers, employing the same shuffling krautrock repetition but with added maximalist fuzz and warped vocoder. The latter makes a few appearances across the record - on the unspeakably odd ‘X-ALT’ it coats Shemie’s voice like syrup, scrambling lyrics into nothing but cryptic noise. Another fresh addition is bursts of velvety saxophone, which plant an unexpected tenderness amongst the ambience of ‘Peace and Love’.

Felt also shows off the band’s expert control of dynamics - the conspicuously empty ‘Control’, punctuated only by chiming triangles and a disembodied vocal sample, is lunar quiet compared to the almighty din of ‘Moonbeams’ or the brittle space-punk of ‘Daydreams’. The bastardised shoegaze of ‘After the Fall’ veers towards Nine Inch Nails territory as reversed guitars slice through like rusted chainsaws, whilst ‘Make it Real’ recalls the drowsier side Radiohead’s Amnesiac.

Sounds like a lot to take in - and it is - but the deep strata of sounds remain uniform enough to keep Felt tethered to the ground. As ever, Suuns don’t alienate you enough to stop you listening, which is to their huge credit. When experimentation is so often an exhibition of flashy (and flabby) production wizardry, they remain refreshingly committed to keeping you entertained rather than just impressed. Felt is a doubling-down of what marked Suuns out from the beginning, and indicates that they’re as comfortable as ever with their status as auteurs. There are few bands working today quite so distinct, and with Felt they’ve produced another record well worth exploring.