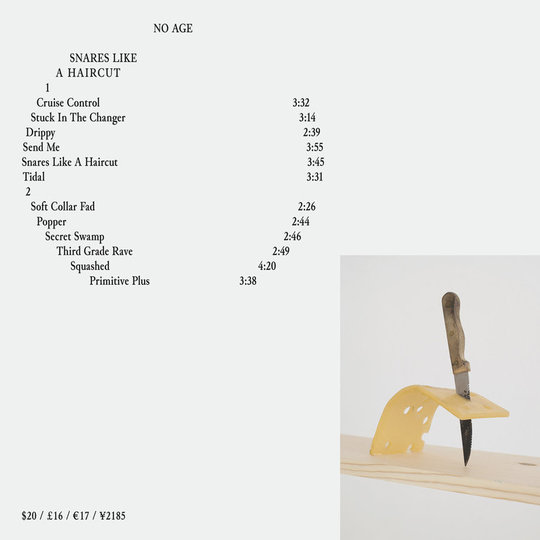 If it wasn’t for the existence of four previous albums and the evidence of several people who swear blind they’ve seen them live, you’d honestly mistake LA’s No Age for a sustained and elaborate art hoax. An experiment in formatting the perfect hipster noisepop band, just weird enough to slip off the surface of the mainstream, just hooky enough to be a solid and real proposition with songs your mum can whistle (in the unlikely event of your mum ever hearing of No Age.) This isn’t a proper band. Surely? FFS, their album artwork is just the tracklisting, the price, and a small picture of a cheese slice hanging off a knife. Someone once described them as ‘dreampunk’, a self-contradictory word describing a sound that shouldn’t really exist, yet it fits the band perfectly: an almost-too-perfect blend of whirligig shoegaze and beefy fuzzpop.

Fifth album, Snares Like A Haircut (sorry, no real band would call an album Snares Like A Haircut?) picks up where this preposterous, brilliant and presumably imaginary duo left off with 2013’s An Object: fuzzy Sonic Youth stompers bumping against drifting sound-collages and blurring in the middle, like an audio venn diagram. The likes of ‘Cruise Control’, ‘Stuck In The Charger’ and ‘Soft Collar Fad’, the latter of which wholesale rips off the two-chord riff from Nirvana’s ‘Been A Son’, could almost be standard fuzzy indie-rock fare, the type churned out by, say, The Vaccines if it wasn’t for production choices that blend and pan the sounds in odd ways, emphasising all the wrong bits: Guitars feel too loud, vocals too distant, drums too unfocused, and yet when you sit back and look at the whole it feels less like self-sabotage and more like an acknowledgment of their nature, be it imaginary or not. It works,. Against all odds, it works. The fact that, cleaned up, these tunes could fill any indie landfill you care to mention makes the beautiful weirdness all the richer.

Then there’s flip side of the coin, songs like the title track with its percussion played by a blissed out Edward Scissorhands, or the brilliantly titled ‘Third Grade Rave’ which seems to have drums recorded under a duvet and washed-out chimes pulled from a parallel universe where the pair have written an almost, but not entirely, different song. It’s the sound of an odd band pleasing themselves, and while that can be an ugly proposition in the wrong hands, here it feels satisfyingly individual, and often very beautiful. The two sides blend together on ‘Squashed’ which takes its’ vocals from the Velvet Underground, guitars from one of the really good Smashing Pumpkins b-sides and beams its drums all the way from Alpha Centauri, hoping you’re too stoned to notice the mismatch. Which, given the previous ten songs, you probably are.

After 40 minutes you’re still not totally sure what it is you’ve listened to. This could be great, messy pop music, or just as easily be something you dreamt, dozing in post-coital bliss with a detuned radio in the background. Whichever it is, you’ll just be glad it exists. If, that is, it exists at all.