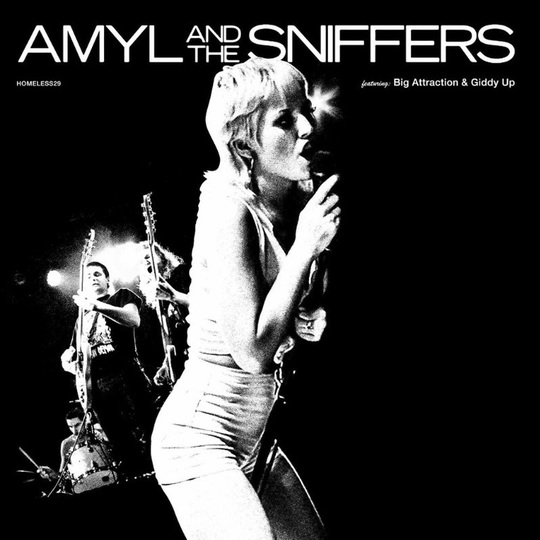 Amyl & The Sniffers are brilliant. They possess the best parts of punk and Seventies rock, but without any of the nonsense. Imagine Courtney Barney/Brody Dalle fronting AC/DC in the 1970’s, with the odd Dolly Parton cover thrown in for fun and you’re kind of on the right tracks. Their songs are fun, in that visceral way that punk should be, and make you feel your speakers will be melt due to the blistering heat of the riffs and scatter shot vocal delivery. To call them a breath of fresh air is an understatement.

Big Attraction/Giddy Up is made up of Amyl & The Sniffers’ first two, now out of print, EPs. Rumour and innuendo has it that Giddy Up was written and recorded in 12 hours when Amy Taylor (vocals), Bryce Wilson (drums), Dec Martens (guitar) and Gus Romer were all housemates. After listening to Giddy Up it definitely starts to feel like it. There is an immediacy these four songs that only really exists in punk/DIY scenes. At times the songs feel like they are about to implode, but the sheer excitement of the band playing them just about keeps them going in the right direction. Yes they are rough about the edges and yes the lyrics feel like a mixture of shouted slogans and stream of consciousness, but there is a beauty and charm to them that makes them memorable and exciting.

‘I’m Not a Loser’, from Big Attraction, kicks the album off. This is all you need to know about Amyl & The Sniffers. It’s brash, fast, hilarious and brilliant. It’s hard to work out if the lyrics are just made up on the spot, self-deprecating or if there is really some deep seated existential angst going on. Either way it kicks the album off in fine form. Things are all blistering riffs and shouty lyrics. ‘Caltex Cowgirl’ slows things down and ramps up the melancholy, but this is short lived as usual service is resumed with ‘Mandalay’. Taylor sounds like Brody Dalle recording after a big night out just before she crashes out. To call it a standout moment would be disrespectful to the rest of the album. The album closes with ‘Stole My Push Bike’. As the title suggests this is a song about having your bike stolen, but like the rest of the album, Amyl & The Sniffers have their tongues well and truly planted in their cheeks.

Big Attraction/Giddy Up is a messy ball of fun and it shows, yet again, that things don’t have to be pristine to be amazing. There is a ragged beauty to the album that really lets the songwriting shine through. At times there is a naivety to them, but that is also part of their charm. This is musical equivalent of walking home past a house party. You walk up the drive way and just go in. You know no one there, but everyone is welcoming. You get offered a drink and shoot the breeze with random strangers. Before you know it you are firm friends with everyone there. After listening to Big Attraction/Giddy Up a few times, these ten songs feel like life-long friends and you wonder how you managed this long without them.