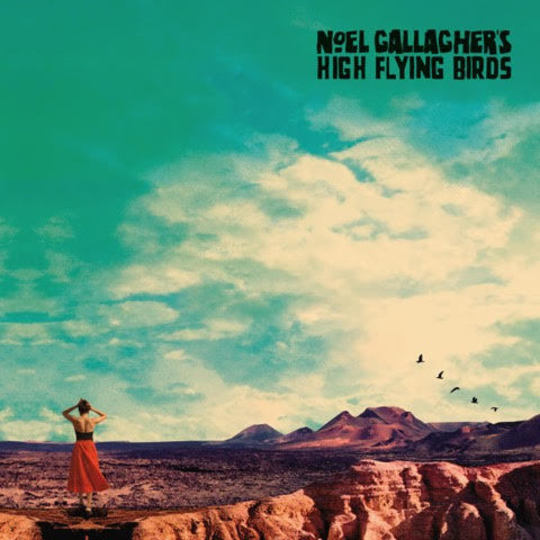 “They’ll let you sing your songs, son, but they’ll never hear you scream” offers Noel Gallagher on ‘Be Careful What You Wish For’, a strange, soulful tune from this here new record Who Built The Moon? that veers between a shuddering, low-key guitar riff, Ray Manzarek-like organ splashes and layer upon layer of choral backing vocal, all held up by a strict, shuddering electronic beat. Yes, that’s correct. Noel Gallagher’s High Flying Birds have made a record unlike any they or Gallagher have made before.

We really do hear him scream - on tracks like ‘Keep On Reaching’ (don’t worry, Oasis fans - the titles are all as comfortingly banal as one might expect) where huge banks of horns collide with Spector wall of sound drums and shouted, snarled vocals from the 50-year old dad-rocker. His voice apes that of The Vaccines’ Justin Hayward-Young on single ‘Holy Mountain’. His garage rock wail crashes over a glam rock stomp leading to a chorus that’s irresistibly similar to disco hit ‘Ca Plane Pour Moi’. This is not usual. This is not the middle-of-the-road rock n’ roll we’ve come to expect and, quietly, accept from Noey-Gs.

This must be, in large part, due to the guiding hand of producer David Holmes. Perhaps in a partial attempt to reignite his creativity in the way Paul Weller (who guests briefly on the aforementioned ‘Holy Mountain’) has in recent years, or even in a grandiose gesture mirroring Primal Scream’s recreation at the hands of Andrew Weatherall on Screamadelica, Gallagher has allowed his steady, formulaic musical foundations to be torn away and has been led to higher ground by Holmes’ guiding hand. The results are outlandish and peculiar.

On ‘It’s A Beautiful World’, which briefly recalls his big-beat collaboration with Chemical Brothers on ‘Setting Sun’, we get a star-speckled chorus with a muted, loudhailer vocal effect augmented by the rich voice of Le Volume Curbe singer Charlotte Marionneau. “Do it like a dance” Gallagher demands…sexily? The melancholic, drawling guitar line courtesy of ex-Beady Eye fella Gem Archer is beguiling; the song as a whole a profoundly unexpected but not unpleasant experience.

‘She Taught Me How To Fly’ hints at Gallagher’s straight-ahead rock past before squirling off into space with a multi-tracked, almost ethereal vocal line set against New Order drum machinery and a Peter Hook-y bassline that carries the rest of the song along on its broad shoulders.

Lyrically of course there’s nothing much to be gained here. “So put your money where your mouth is / If you know where to draw the line” is about the standard of couplet we’re given along with throwaway nonsense like “No need to shout / What you bitchin’ about?” (‘Holy Mountain’). Yet that’s to be expected. There’s at least one interesting line in the shape of “I’ll sing a song of love and you can teach me what you know of death” (‘It’s A Beautiful World’) but it stands out like a clown at a funeral. Or, you know, whatever the opposite of that is.

Words ain’t the thing here, that’s for sure. It’s this big, bold, brash production and this array of sonic left turns that are capable of leaving the listener reeling.

‘The Man Who Built The Moon’ begins as an epic, space-rock stormer that would appear to defy description. But let’s try, eh? An off-kilter, Queen-penned video game soundtrack song? A power-prog explosion fed through an off-kilter Nineties dance mincer? It backs off into a trad rock corner before bursting out of the blocks again, horrifically melodramatic and in sharp contrast to Gallagher’s “We never should have left town in the first place” platitudes. It is, quite frankly, fucking nuts.

But is it any good? IS IT? Well, the Roddy Frame-sounding, Johnny Marr-guesting ‘If Love Is The Law’ holds the record’s most melancholic and masterful melody - in fact, it’s bloody lovely; ‘Black And White Sunshine’ soars and swoops just where it needs to with a Smithsy guitar chime and further lyrical banality (“the weight of the world is dragging me down, down, down.”). So there are moments when simple sense can be made and one can ascribe straightforward terms like ‘decent song’ and ‘not a bad track, that’ to them. Yet they are few and far between.

Instrumental interludes like, er, ‘Interlude’ and ‘End Credits’ (that one’s at the end, folks) stir the pot further - pastoral, proggy and somehow serene they contrast almost comically with the frantic world-building of the rest of the record.

Gallagher has, for the most part, shed his retro skin and Oasis go-to moments here - often at the expense of things people really like such as recognisable melodies, big tunes and predictable chord changes performed by predictable band blokes. The moments of recognisably female voice contributions provided by the aforementioned Marionneau and session singers (deep breath) Michelle John, Janet Ramos, Una McGeough, Georgina McGeough, Audrey Gbaguidi, Beverley Skeete, Sara-Jane Skeete, Mary Pearce and Adelaide McKenzie are a welcome respite from that approach. Also to be praised is Emre Ramazanoglu for the programming and percussion skills that help lift this record out of the ordinary.

Though of course it has Gallagher’s name on it and he’s the guy with the songs, this feels like Holmes’ record - a studio-created melting pot of awkward approaches, inspired instrumentation, the occasional colossal flop and a few genuinely unique moments. More power to Gallagher for giving him the reigns here and allowing himself to be guided into territory that’s often fresh, sometimes really interesting but, above all, utterly atypical and bizarre.

It’s worth a listen.