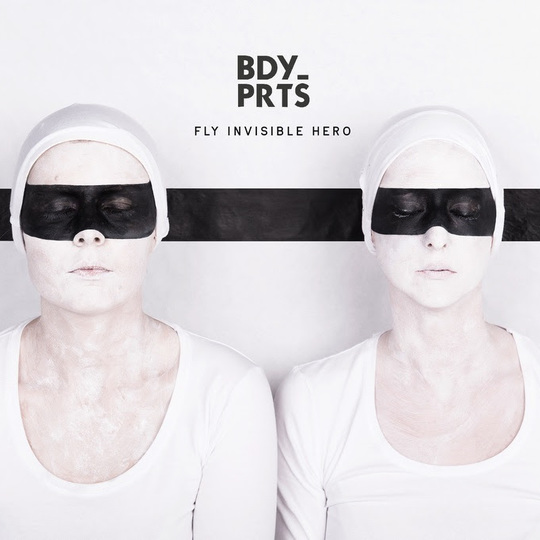 It seems despite the multitude of both guitar-based singer-songwriters and fully electronic acts coexisting in the zeitgeist today, few acts aim to combine the two disciplines, and that’s because it’s an exceedingly difficult balance. Self-producing Glasgow band BDY_PRTS, however, have perfected their own recipe, echoing Scottish indie ancestors like Franz Ferdinand and electronic contemporaries like Hudson Mohawke in the same breath on their debut album Fly Invisible Hero.

Fly Invisible Hero standout 'Rooftops,' for example, has a distinct base of clean guitar chords, yet pairs with a sputtering kit of 808s, and any musician that considers themselves a self-producer understands the difficulty of such a blend. It’s a song with serene and sweet chorus, but at this point in the album we’ve acquired a sense of passivity from singer/songwriters Jill O’Sullivan and Jenny Reeve. There are no explosive displays of emotion or political roars on this record, but in the defence of projects like BDY_PRTS, sterility can be an aesthetic, or even a virtue.

To appreciate Fly Invisible Hero also requires a pop-tolerant ear, as the constant whoa whoa’s of side-A cuts 'IDLU' and 'Take it to the Top' seem to have stemmed from classic pressure on new artists to grab fans with hooks, and in doing so they hinder the otherwise excellent fluidity of their performances and production. 'Welcome' showcases the formidable vocal strength of O’Sullivan and Reeve, and like FKA Twigs or St. Vincent, the whimsy of the band’s photos, artwork, and wardrobe prove delightfully inseparable from the sounds. BDY_PRTS are the sort of relaxing indie act you might have unearthed in the mid-oughts from an episode of Later… with Jools Holland or MTV’s short-lived Subterranean series, á la CSS or The Raveonettes, reminders of a time where not everything had to be so boisterous and/or melodramatic (as more recent artists have become in some apparent desperation to stand out from the Internet void).

On side B, 'Ghost in the Maze’ sticks a soaring reflection of early Björk that even demonstrates a spot of lyrical prowess, and ‘Warrior' is a welcome venture into retroism, its Prince-esque drums backing an anthemic, Benatar-esque chorus that marks the album’s most powerful moment. An ascending order of profundity in songs is a trend I’ve noticed often in the albums of new artists, which I estimate may come from a faulty business objective to front-load with attempted singles and leave the more 'artsy' (business term for inspired) ones for the back. Hopefully first-time listeners won’t grow tired in Fly Invisible Hero’s bubblegummy first half before they reach these marvels.