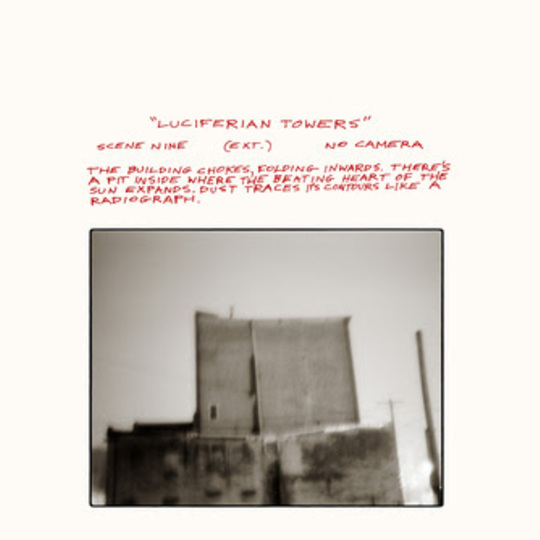 It’s always been a notable duality of Godspeed You! Black Emperor that the Montreal collective combine some of the most radical politics in the entertainment industry with virtually instrumental music. Far from neutering their politics, their beautiful, apocalyptic torrents of sound feel more profound for not having their grandeur shackled by the banality of language, for letting the listener imagine meaning.

And yet that’s not the whole story: knowledge of the band’s intent and politics is clearly important, and that goes beyond simply having a dim idea that they'd probably quite like to overthrow capitalism. Each Godspeed album is a physical package – a work of art – in which the music is surrounded by other signifiers. The song names; the album name; the artwork, including any other words on the cover.

The band’s sixth album - third since their gratifyingly seamless reformation – is their gentlest to date, 44 minutes of music arranged around a single, dreamy riff/motif. Listen to it on Bandcamp or Spotify without checking out the other stuff that comes with the music and it perhaps seems like a retreat from the sturm und drang of their previous work. But the accompanying words and art to Luciferian Towers posit it as the band’s most politicised set since Yanqui UXO, imbued with a seething paranoia and stark contempt for authority, that sits at odds with the loveliness of much of the set, which only occasionally reaches a screeching head of steam.

‘The empty-faced undersecretary of we-all-fucking-die absconds to private island, we get left in the gathering flames, the scorched detritus of their dull vanities. We asked for basic needs. All they ever said was nothing,’ run a section of text on the inner sleeve.

And yes, you could probably argue that it’s just a bunch of cool-sounding words, but it politicises the music. Giving a beautiful, lullaby-like three-part-song the name ‘Bosses Hang’ politicises the music. And the image of crumbling spires left to rot by uncaring bureaucrats can’t help but give Luciferian Towers a certain sickly resonance post-Grenfell. Of course the music was written and album conceived long before the tragedy (projections of skyscrapers were used to back ‘Bosses Hang’ when it was aired live in 2016), and if the record was inspired by anything in particular it would presumably be something Canadian (one doesn’t get the impression Godspeed suffer from Trudeaumania). But it feels emblematic of the appeal of the band, that their work effortlessly recontextualises itself around troubled times.

Now, you may legitimately wonder if the preceding is all just sub-Barthes fanboy gymnastics designed to attribute significance to a record that’s not been hailed as Godspeed’s best. But I can see that too: I don’t think there’s a quality problem with Luciferian Towers, but it’s certainly the band’s most homogenous, least dramatic album. Even more so than Asunder, Sweet and Other Distress it feels like a single movement of music, when all their previous sets included at least a couple. To be sure there are huge tonal differences between the two named pieces of music that effectively make up the record: ‘Bosses Hang’ has an almost shoegaze-like gentleness, while ‘Anthem for No State’ reprises the earlier motifs with a heady mix of guitars buzzing like an angry swarm and a mariachi-like quality – the same sense of outdoors and human desert conveyed on F♯ A♯ ∞, but with an appealing spirit of adventure, a surging twinge of hope. And there is something magnificent about the cavernousness of sound, and letting a single movement go on such a voyage.

Perhaps if there is a feeling of hope to the record it ties in with the last piece of accompanying context to the album: the 'press release' that announced it, a series of utopian demands ('an end to borders' 'the total dismantling of the prison-industrial complex'). The album's drone opener is called 'Undoing a Luciferian Towers', and I think perhaps that's really what the album is, a condemnation of this sick world and a dream of a happier new one.

But ultimately it feels like one beautifully-realised idea, when even their Slow Riot for New Zero Kanada EP featured two. It would have been cool if it was a double with another movement of music, I guess. But frankly it still feels pretty incredible to only have such trivial criticisms to make of the band in 2017: now deep into middle age, perhaps Godspeed are slowing down a little, but their music and their rage remain undimmed and beautiful.