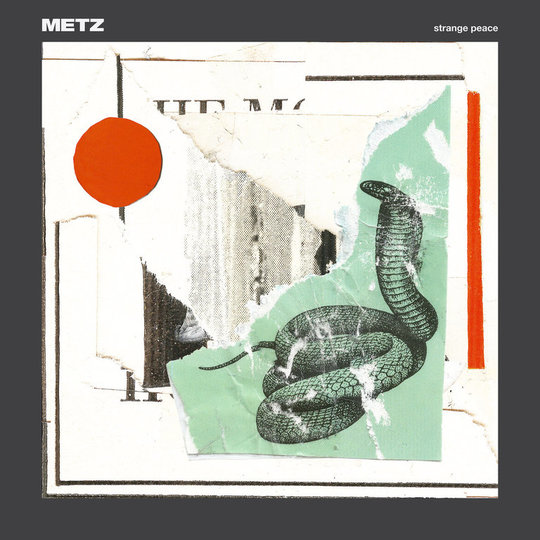 Back when Toronto three-piece Metz first unleashed their debut, self-titled album in 2012, it was like a tidal-wave had been unleashed. It had been some time since the legendary Sub Pop label had released something so ferocious (bar perhaps, Pissed Jeans) though it was quite clear why the band and label were a perfect match from the onset. Rarely this side of the millennium had such an explosively LOUD band bothered the 'indie-mainstream' bar acts like Fucked Up or Ice Age.

The hype was justified too as METZ was a terrific, bolt out of the blue debut. Since then, the Torontans ran a little out of steam on their follow-up, 2015's II, which was a solid record but largely stuck to the winning formula before. Two years on, the band have a renewed sense of vigour, thanks in no small part to the legendary producer and reviver of many band's careers, Steve Albini, on their third record Strange Peace.

Immediately, Albini's presence is felt with his voice feeding through from the control room saying 'You are rolling' on the propulsive opener 'Mess of Wires', bringing his signature live drum sound to life. There is an expanse Albini naturally brings to all his recordings, it is why bands so regularly go to him for the kick up the ass they so often require after a couple albums into their careers.

Songwriting-wise however, this is par the course for Metz. These are still the fast-moving, shape-shifting, ear-splitting ragers we have come to expect from the Toronto trio, and if you are a fan of that already, this album will not disappoint. The thing is, a lot of Metz's appeal is based on wishing Albini-alumni Nirvana were still an active band. 'Cellophane', for instance, has a catchy hook right out of Cobain's playbook, with a similarly dissonant guitar solo to boot. 'Mr. Plague' is a sped up version of one of Krist Novoselic's best moments in 'Radio Friendly Unit Shifter' while finale 'Raw Materials' at least borrows from the earl-Nineties alt-rock era's other major influencers, Sonic Youth, during its middle section.

Still, without wanting to sound too harsh on this pretty great band, there are some interesting embellishments they bring when they slow down and take stock of themselves. The central two-piece 'Caterpillar' and 'Lost in the Blank City' rachet up the tension to excruciating quantities, better than they've perhaps ever done before in their career so far. 'Drained Lake' however brings out a dynamic the band sometimes forget about, going loud and quiet but never losing pace akin to some of the greats like NEU! or Can. Meanwhile, 'Sink' brings things to a rather creepy, almost Slint-esque head whereas 'Common Trash' is about as classic of a Metz song one could hope for, bent strings and all.

Metz are perhaps never going to quite shock and awe as they did with their volcanic debut, if you don't know what they do by now then you can't have heard them before. That said, full marks go, as usual, to Albini who breathes life into these often familiar songs to make them sound positively MASSIVE for a band who already had a pretty 'big' sound in the first place. Metz keep consistently ticking along and will always be a welcome addition to any year's new releases, regardless of whether they're the most original band in the world and Strange Peace does nothing to disavow that.