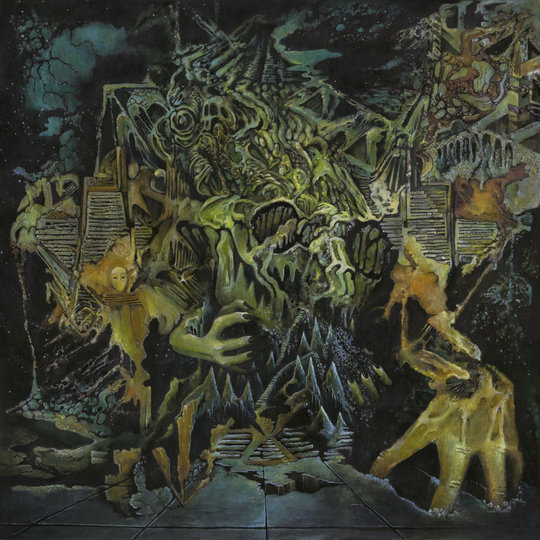 King Gizzard and his good mate, The Lizard Wizard (I presume they’re a black magic obsessed duo, and not a gang of gangly 20 somethings from the south coast of Australia, because that would be a bit silly) have been aggressively bashing away at each and every genre under the sun for a good seven years now, conjuring up a rather baffling number of records that sound like best parts of your vinyl collection aggressively blended together in that food processor your Gran got you the other Christmas.

They’ve always been a bit on the odd side, but this year the guys have upped their weird game exponentially. If you haven’t already heard, the group are planning on realising a quite frankly insane five albums in 2017. Murder of the Universe the second in this bizarre pentagon of ideas, and their tenth album in general, takes things to a dark and twisted land, right from the John Carpenter-esque blurbs of opener 'A New World' to the closing moments of 'Murder Of The Universe'.

'Altered Beast I' and its sequels, 'Altered Beast II', 'Altered Beast III' and 'Altered Beast IV' come together to make an agitated puke stained masterpiece that tell the tale of some sort of ancient swamp monster on a mission of destruction, probably... If 2000AD ever decide that their comics need soundtracks, then these fellas have them sorted. The tracks are camp, angry and actually a little bit scary.

As the record progresses its clear what the group are trying to achieve. They’re retelling 'Yoshimi Battles the Pink Robots', but with added death and amphetamines. 'The Lord of Lightening' crams in paisley-covered synth notes, Sabbath-inspired prophecies, a sax that squeals so aggressively that it might just pop your eyeballs right out, and at one point a recorder toot. It’s a mess, but what a glorious mess it is.

Rather strangely the record features a hell of a lot of voiceovers. In between almost every track the calming voice of an unnamed narrator tells us a bit more of the fantasy. Such a pompous, and quite frankly pretentious, idea shouldn’t work, but the sheer chaos of the group’s music wrapped around each piece of spoken word makes everything flow beautifully, somehow. In fact, a lot of things about Murder of… shouldn’t work, but they just kind of do.

In the blink of the eye the group jump from genre to genre. 'Vomit Coffin' flirts with heavy metal, garage, psych and even a bit of glam. You can’t say you don’t get your money’s worth with these lads. Even if one genres not for you, it doesn’t matter, just give it ten seconds and they’ll be off onto something completely different.

Maybe by the end of 2017, five records of this headache-inducing madness might be too much, but, at least for now, those reptilian magicians have got us wanting more. Bring on album number 11. Let’s embrace the weirdness.