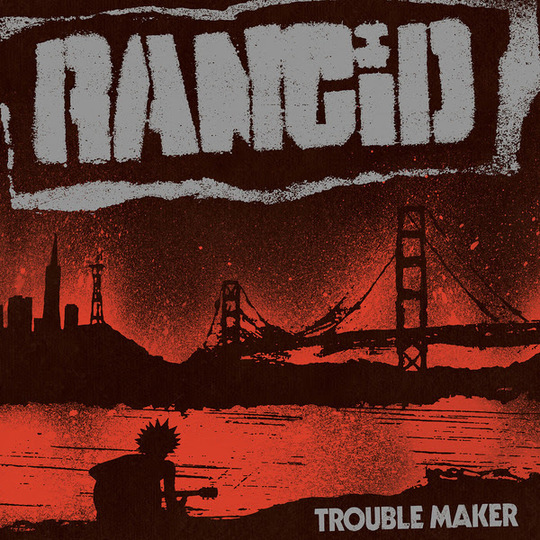 Recently I was reading the third edition of the punk comix anthology As You Were. In it there was a one pager about why ‘Punx Should Never Change’. It cited Bitz, a working class skin-head band that by their second album had gone goth. Discharge went Glam. Bad Religion released a prog album that was removed from their back catalogue in later years because they disliked it. The final band mentioned was Rancid. They started in 1991 and had an East-Bay sound and by 1994 they sounded like The Clash with heavier ska undertones. The moral of the story being 'Unless you are Rancid, don’t ever change'.

Their ninth album Trouble Maker starts with ‘Track Fast’. As the title implies this is a fast track. Balls to the wall after a minute it is over with your only memory of it is the ringing in your ears. ‘Ghost of a Chance’ follows on its heels capital with a capital-'P- punk. Like the opener it’s another quick one, 90 seconds gone and it’s over. What these songs effectively tell us is that Rancid are the same band we remember and, despite their older statesmen status, they can still play as hard and fast as anyone. ‘Telegraph Avenue’ slows things down a bit, but not by much, and contains a catchy opening riff that is instantly lodged in your head. The real star is the confessional nature of the song writing. Every guttural utterance is filled with a melancholy and longing, but for those of you who are longing for a bit of snap the “na, na, na, na” chorus provides this, and then some. This is classic Rancid, but at the same time it shows a more reflective progression to their song writing.

‘An Intimate Close Up of a Street Punk Trouble Make Over’ is where the album really starts to come in its own. While the opening three tracks are fun, they feel like filler next to this brazen assault on the senses. This is possibly the best Rancid song of the last decade. It shows a band that has had its shares of ups and down, but they’ve stayed together and true to their punk roots. What they’re doing is showing us that nothing can hold them back and when they want to they can still wail.

The rest of the album follows the formula laid down by the in opening, fast rockers followed by slower and slightly melancholy numbers. This helps break up what would be an unrelenting barrage on the senses and give us a chance to reflect on what we’ve just listened to. One of the standout moments is ‘Say Goodbye to Our Heroes’. This is a bittersweet lament about legends of the genre dying. The catchy chorus of “This song goes out to our punk rock heroes. You see, the flame that burns twice as bright, burns half as long. And we tip our hat to you, and you know we’ll see it through, when we say goodbye to our heroes” hammers this message home. It’s a reminder that eventually we will all die and we should probably try and enjoy the moments we spend together more. It also reminds us that Rancid as the elder statesmen should be treated as such as they won’t be around forever.

Trouble Maker is a return to force for Rancid< and is the musical equivalent of a football team winning a major trophy after years in the wilderness and the absolute elation that comes with that. However there is a downside. As I mentioned earlier, the moral of the As You Were story was 'unless you are Rancid, don’t ever change'. And this is the problem with the album. Rancid could have released Trouble Maker at any point since they began. Other bands from the same period of progressed with their sound and song writing, with better and worse results, but Rancid have always sounded like, well, Rancid. There is nothing wrong with this, but before you listen to this album you know exactly how it’s going to pan out. Shouty vocals, fast guitars, catchy choruses and lyrics that are either filled with fun or the flip side of what can happen if you have too much fun. Hardcore fans will argue that this is what they always want from a Rancid album, but after listening to the album a couple of times it all starts to merge into itself. The final track is ‘This is Not the End’ hinting that there is more to come from this band. Let’s hope next time they keep the energy of Trouble Maker but try and offer something different to the mix.