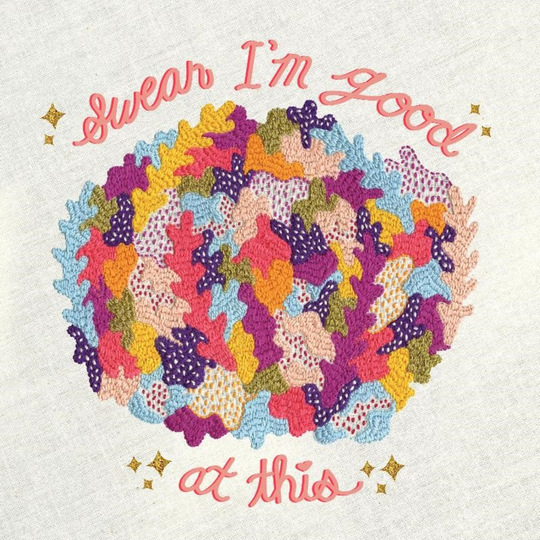 While judging things by their covers is generally agreed to be a bad thing, it’s hard not to love an album called Swear I’m Good At This. This oh-so-very-long-awaited-I-can’t-believe-it’s-finally-here-heart-eyes-emoji debut album promises, with its title, the coupling of vulnerability, self-assurance and breezy humour that have become near synonymous with Diet Cig. But so long in the making has it been, that their sensibilities have had time to grow and evolve.

And grow and evolve they have done. After a humourous, anecdotal opening on ‘Sixteen’, Swear I’m Good At This is often fiercely emotional, with moments like the fist-clenching, heart-yelling refrain at the end of ‘Maid Of The Mist’ among its best. Elsewhere, singer Alex Luciano uses her vulnerability to full artistic merit, plaintively singing to a partner “I wanna kiss you in the middle of a party / I wanna make a scene”. In a world that polices, derides and invalidates women’s feelings, Luciano affirms her own in a gesture undeniably, radically punk.

Their music feels like it’s increased in intensity and, in a sense, 'heaviness', to match those of its subject matter. Luciano’s guitar sounds much crunchier, stronger, than on the Over Easy EP, and her voice often sounds much closer, louder, more definite, clear. Noah Bowman’s drumming too seems to have grown heavier, leaning on beats and creating much bigger sounds than we’re used to form Diet Cig. Yet this sense of 'heaviness' remains decidedly - radically - soft. Because of course, the whole thing that’s radical about having ~feelings~ and declaring them is their, and your, fragility.

There’s of course lots of fun to be had here too, of course, such as at the beginning of ‘Sixteen’ and throughout the self-deprecating, punnily-named single ‘Barf Day’. There’s an element of this laugh-weep humour that takes its own pain just a bit more seriously than previously, notably on ‘Barf Day’, as Luciano affectionately narrates the story of her twenty-first birthday as a case in point of her younger self’s loserism.

They’ve not abandoned the 'determinedly not a grownup' trope that was so central to their earlier work either, as the refrain of ‘Barf Day’ complains “I just wanna have ice cream on my birthday”, while ‘Apricots’ tells of going to the supermarket and buying “everything I think my mom would get” and getting it wrong. These too though are tinged unmistakably with pathos, as the context of ‘Apricots’ is one of heartache and homesickness. Elsewhere, Luciano’s perfect articulation of imposter syndrome - “Can you tell that my shoes are too big on my feet?” - is presented in the context of the conflicting pains and euphorias of an ‘it’s complicated’ relationship against the backdrop of life feeling intimidatingly immense.

While there’s nothing wrong or 'lesser' about the sugared breezy collegecore of 2015’s ‘Breathless’ and ‘Pool Boyz’, fans of ‘Harvard’ could well hear Swear I’m Good At This as a fulfilling of potential. Regardless of what anyone wanted or expected from them though, this brilliant debut sees Diet Cig establishing a complex, nuanced voice with a subtle uniqueness, a fierce emotionality and a great sense of fun.