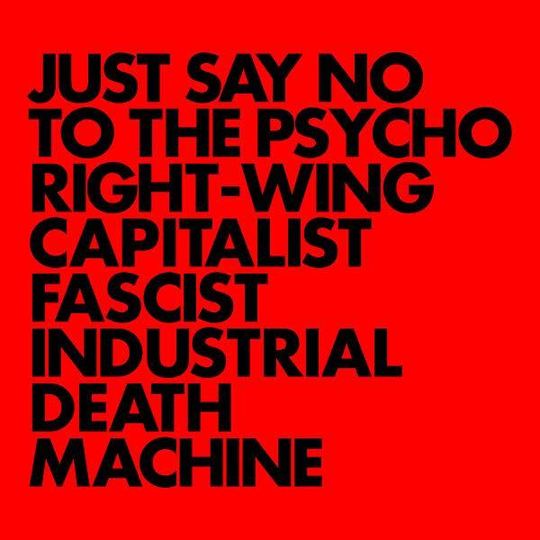 Manchester’s Gnod are many things, but shy isn’t one of them. Just Say No to the Psycho Right-Wing Capitalist Fascist Industrial Death Machine isn’t exactly a political statement, but it is unashamedly informed by the contemporary political environment. As Britain prepares to leave the European Union, Trump sits in the White House (or in a Florida golf buggy), Marine Le Pen prepares for her shot at the French presidency, and the painful slow motion collapse of neoliberalism’s ill-founded political consensus continues, the unholy cacophony bands like Gnod are capable of unleashing feels utterly essential.

Since 2015’s Infinity Machines, a psychedelic nightmare that frequently sounded like the soundtrack to the earth’s gradual descent into a vicious wormhole, Gnod have opted for a somewhat more direct approach. Last year’s Mirror was a more stripped back and consciously violent affair and, as its title could be seen to imply, Just Say No… is much the same. That’s not to say that Gnod are repeating themselves. Just Say No… feels like a more consciously chaotic record than its predecessor, with guitar tracks frequently sounding like they are competing with each other for breathing space. At times Stephen Malkmus’ wonderfully unhealthy-sound guitar squall is brought to mind, although it is swiftly banished by bass lines that feel like they are going to burst savagely out of the stereo. Writing for DiS last year, Tristan Bath compared Mirror to early Swans. Just Say No… feels more like The Fall’s early output; indeed ‘Real Man’ namechecks ‘Hip Priest’. Fellow contemporary noise rock specialists Årabrot and Blacklisters also spring to mind. Like all these reference points, however, Gnod stand out from the crowd by virtue of not sounding quite like anyone else.

In fact Just Say No… is probably the definitive expression – to date – of Gnod’s caustic sonic preferences. Opening pair ‘Bodies for Money’ and ‘People’ feel like appropriately disquieting portrayals of the dehumanisation that is taking place across twenty-first century society. The former occasionally feels like it’s going to overtake itself before its insistent lead guitar riff and frantic drums give way into a disorientating mid-section: “Bodies for money, money for bodies”. ‘People’, meanwhile, builds up to a thundering climactic section that might just be the record’s most intense moment… at least until the exhausting ‘Paper Error’ kicks in and flattens all before it with its jackhammer guitar approach. ‘Real Man’ offers a seething character study and another spectacularly turbulent outro.

The final track, the 12-and-a-half minute ‘Stick in the Wheel’, references many of Gnod’s more experimental urges whilst never letting go of the album’s premise. The first half of the track is another exercise in searing noise rock, but this time when Gnod step back they do so in more outré fashion. The piano line that gradually comes to the fore during the track’s second half is a masterstroke, providing Just Say No… with a suitably elegiac final expression of disappointment in events unfolding around us.

Far more than a simple exercise in rock as violent fury, or as political vehicle for that matter, Gnod’s latest effort is yet another important musical statement from a group firmly at the forefront of everything good about British underground music. That it arrives in time to soundtrack such troubled times as these is, of course, a welcome bonus.