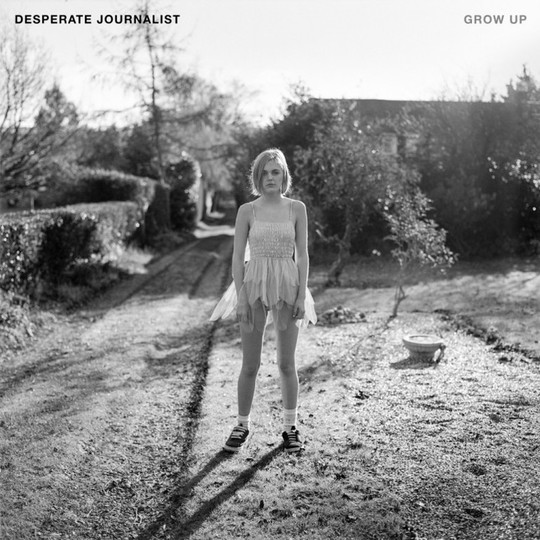 As I stumble further into my thirties, it's increasingly infrequent that I fall in love with a new band. In the same way that you seem to stop acquiring friends after a certain age, I’ve apparently arrived at the point where I’ve got enough bands and records in my life. The younger me, a ravenous devourer of the bands ballyhooed on these pages ever since the days when they were predominantly blue, would, of course, be utterly horrified to read this kind of stuff trickling from my tired fingers.

The point of this faintly depressing meander into the recesses of my ageing psyche (aside from cautioning you, dear reader, against letting yourself get old) is that I’ve realised that Desperate Journalist’s self-titled debut a couple of years ago was probably the last record by a band I didn’t know that I fell spectacularly for. Unsurprisingly, it was a feeling of familiarity which drew me in initially, with their dark melodrama reminding me of so many of my favourite bands - they’re very obviously a group who know their indie-rock history, and almost certainly have magnificent record collections. However, the thing which kept me captivated wasn’t this pleasant sense of kinship, it was the sheer power of their songs, underpinned by the emotive force of Jo Bevan’s vocal.

Of course, a new album by a band you like is ostensibly A Good Thing, but sometimes loving a particular record so intensely can prove counterproductive in trying to get your head round a follow-up. A big part of Desperate Journalist’s power was that it was so much more than the sum of its parts. The spell spun by the chime of the guitar, the rumble of the bass and the gloomy clouds of reverb created a wonderfully intense atmosphere which pervaded the music from start to finish. Like a great film, it felt like it a glimpse into a world similar to ours, only much more dramatic and profound.

Crucially, the sequel Grow Up takes you back to that very same place, but now the actors are better, the story more poignant, and the characters are more fleshed out, so it lures you further than ever before into its bewitching alternative reality.

The key musical components are all still very much present, but it feels like the power of Caz Hellbent’s drumming has been brought further to the forefront, giving songs like ‘Hollow’ an extra air of menace. Indeed, everything which made Grow Up’s predecessor sound good sounds that much better this time out. The riffs ring out with more clarity and direction, the bass prowls more moodily and more purposefully, and Bevan’s voice is again on wondrous form. She’s capable of conveying so much emotion with her delivery, and she does so absolutely beautifully here. Whether she’s snarling with pure spite as on ‘Why Are You So Boring?’ or sounding utterly lost on ‘Be Kind’, her authenticity is absolutely crucial to the identity of her band.

A few more years playing together has refined Desperate Journalist’s songwriting significantly. There’s more emotional and musical depth to the songs on Grow Up, the slow-dance of ‘Purple’ being probably the biggest example of this. Grow Up is a very ‘second album’ kind of title, and indeed Grow Up is a very ‘second album’ kind of record. It’s always gratifying to see a good band moving towards being a great one, and this feels like several steps in that direction. I guess there’s a lesson in there for the likes of me too - Getting older really shouldn’t mean closing your eyes and ears, because just imagine what you could be missing out on.