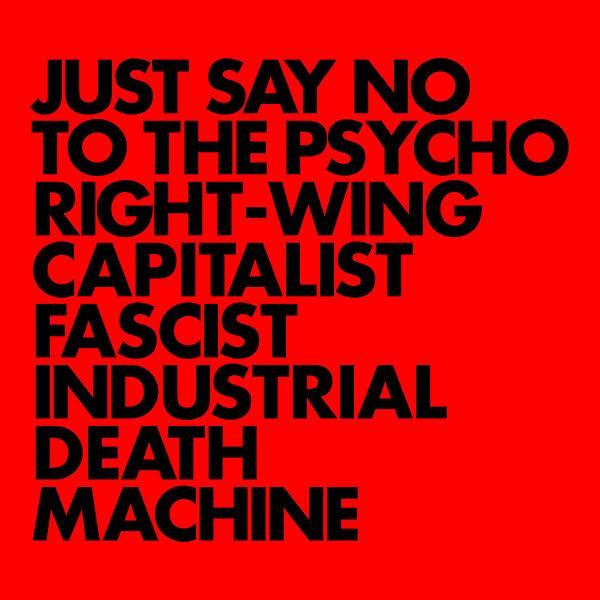 As we embark on a new year more characterised by fear and uncertainty than hope and optimism, a chronic shortage of dissent can be detected in the artistic community amidst a harrowing socio-political climate. Yet the Salford-based collective Gnod have wasted little time in kicking against the doom and disquiet with everything at their disposal. “It seems like we are heading towards even more unsettling times in the near future than we are in at present.” Reckons Chris Haslam of Gnod. “2016 is just the beginning of what I see as the establishment’s systematic destruction of liberalism and equality as a reaction to the general public’s loss of faith in their system” Charged by this outlook, Gnod’s new album, Just Say No To The Psycho Right-Wing Capitalist Fascist Industrial Death Machine represents a hitherto uncharted level of antagonism and adversarial force for the band - an artistic statement as righteous, fervent and direct as its title. which far from being an echo of an anarcho spirit of yore, denotes a record firmly entrenched in the psychic terrain of 2017. “On the surface it could almost seem like there’s no political art movement out there to oppose what’s happening, but there is - we know there is” adds the band’s Paddy Shine. “Maybe that movement is struggling to find its voice as a cohesive whole right now but that will change. It has to change.” Fuelled by their militant drive and unyielding ardour, Just Say No… refracts Gnod’s harsh and repetitive riff-driven rancour through a psychotropic haze of dubbed-out abstraction, with Paddy’s incendiary vocal delivery to the fore. ,Just Say No… sounds like a record only Gnod could make - a band fiercely independent, never comfortable in one place artistically for any duration of time, always with their co-ordinates set on uncharted territory and the next challenge ahead, and delivering a monument of ire and iconoclasm.
description from www.roughtrade.com