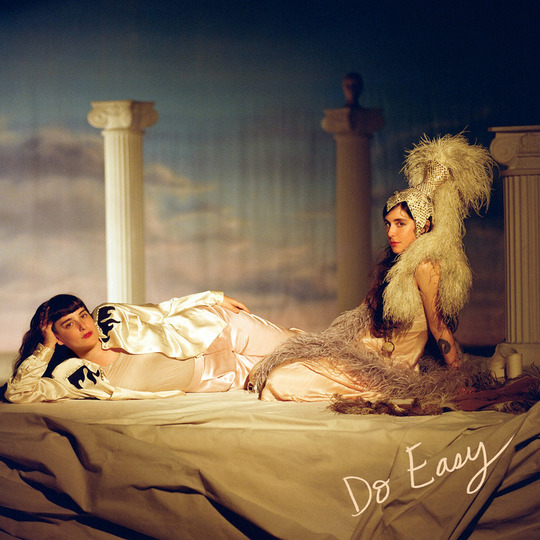 Instead, you’re standing outside the local arts centre for the opening of Tasseomancy’s latest exhibit. The hotshot critics are up at the door, swapping opinions on the finer details of steel drum brush strokes. They’re eager to see if the Canadian collective will deliver on their promise to move beyond mere silk draperies to tapestries of the richest prose. (Well, everyone except Joe, who’s just here for the free wine at the reception.)

Now the door opens – and, to everyone’s surprise, the gallery floor looks just like a house interior, replete with bamboo carpets and inviting leather recliners. The walls are a breezy blue, the trim white, the windows flung open to let in synthetic sunshine and. You’re all quite confused. Is this an art installation, or a housewarming social?

Your party disperses. Portraits and stills line the walls - the pictures are glossy and slightly iridescent, the frames gold-painted plastic. Each depicts a scene: a woman looking down from an apartment balcony; two women smiling from a dimly-lit bar counter; a group in sequined black dresses, posing in a concert hall. They seem like denizens of the Eighties, from their geometric style and contoured perms. Someone next to you is studying them, muttering “hmm” and “ahh” and “ah, there she is again”. He’s telling you that the artist has hidden a story or two in these pictures, and he’s going to find it; to you, though, the sequence seems as arbitrary as the usual domestic array of photos, albeit with more characters and from an earlier time.

You encounter a stairwell at the far end of the room; a curtain of purple plastic beads awaits at the top. So you climb, and part the threads to enter a lounge of some sorts – there’s a magenta couch, a potted palm tree in a corner, a cyan trash bin, and neon lights zig-zagging down the deep maroon walls. A few portraits adorn this room, too, but these people you recognise – Billy Joel, Phil Collins, Kate Bush. You’ve even seen these exact pictures of them, probably on Spotify or last.fm. This amuses and irritates the visitor that followed you in. “Imitations, imitations”, he’s muttering. “All sequence and no substance”.

A white door catches your eye in the back of the room. You leave the critic to his musings and egress through the door into a murky den. Only the glare of a black-and-white, muted television lights the chamber; though the screen flashes with snowy static, you can make out Laurie Anderson on a stage. The word 'Missoula?' scrolls across the bottom, like a news marquee. You’re struck with the urge to turn on the volume, to at least fill the silent room with sound – as you cast about the empty room for the remote, however, a hum clicks and whooshes. You wheel around to locate the source of the very modern sound; so far, that one blip has been the only signifier that you remain still in the twenty-first century. But it’s dark, and now your hand has brushed the handle to a door you can’t see.

“Yes, yes, the feminist and lesbian connotations. To what end, though? That’s what baffles me.” Finally, you’ve found the reception hall, albeit from a back entrance – you’re now behind the bar counter, where a server is pouring wine into five glasses, and several of the guests are milling before you. “Aye, it lacks context, but the tedium is quite well done”, says one of the hotshot critics as he plucks a glass from the counter. No one seems to notice that you’re here.

Now, then, seems like a fair chance to sidle out from the bar (without the wine – tempting, though) and locate the exit. Despite the critics’ rosy blusters and the artists’ initial promises, what you’ve just witnessed wasn’t an art exhibit at all – this is a movie set, where the details rest comfortably in the background and add only to a sense of ambience, not to a bold artistic statement.

You step over Joe’s body as you walk toward the exit. Looks like he got what he wanted, at least.