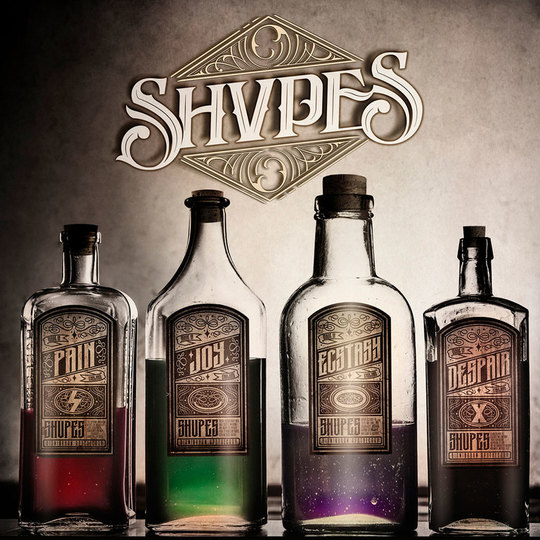 SHVPES have got a lot of pressure weighing down on them with the release of their debut album Pain. Joy. Ecstasy. Despair. Formed from the previously similarly hotly-tipped Cytota with the addition of vocalist Griffin Dickson, there’s a lot riding on this record to take the band beyond their current station and mark them out as real contenders. So, if you’ll forgive the pun, does it shape up?

They’re a band whose heart is seemingly in the right place, as Dickson explains: 'As a concept, this album is about finding the beauty in whatever situation you’re in. Your ability to feel pain, to feel despair, is ultimately what allows you to embrace the feeling of joy or ecstasy. It’s like ying and yang. This record have me a platform to expel 24-years-worth of frustration and turn it into something positive; something I can be proud of and something, I hope, the listener can find solace in.'

Solid opener ‘Bone Theory’ comes off as a splicing of Soil’s memorable and perennially-Kerrang! TV-bothering single ‘Halo’ and the post-hardcore noodling of Funeral For A Friend, all wrapped up in contemporary production and showered in double-kick, washy cymbals and perfectly-pitched harmonies; so far, so similar.

Dig a little deeper towards the middle of this record though and you’re greeted with barnstorming single ‘False Teeth’. It’s almost undoubtedly the highlight of the album and is a genuinely exhilarating rush from start to finish. It’s a song that fairly barrels into itself and immediately raises hairs on the back on the neck. One foot in the world of nu-metal, one foot in the strange and wonderful world of Enter Shikari, the machine-gun lyrics are spat with the perfect level of vehemence and disdain. Shots fired, indeed.

Elsewhere, the weighty chorus of ‘Skin & Bones’ carries shades of Linkin Park’s vocal dynamo Chester Bennington if he were ably backed by While She Sleeps, and there’s a delightful gear change from acoustic guitar to hurricane-beatdown in 10 seconds on the title track that comes as a real kick in the teeth. Prying open the meat of the album a bit more, ‘Two Minutes of Hate’ feels like a heart-on-sleeve homage to KoЯn by way of House of Pain with a seriously doped out bass line and swelling guitars. Slap bass solo into a thrash outro? Why the hell not, eh? This is supposed to be fun, after all.

There are some bone-snapping-ly brutal and accomplished instrumental sections here, notably on ‘State of Mine’ and the very satisfying ‘God Warrior’ with some interesting dynamic to the songwriting and a refreshing smattering of experimentation, but, and it’s an honest shame to say, that special something, the magic ingredient that makes a really great record, it’s just not there.

Unfortunately, and inexcusably, there are times when Pain. Joy. Ecstasy. Despair. feels like a somewhat generic and forgettable listen. It’s an album which – if it had been the best it could have been - the epithet 'all killer no filler' feels like it should have applied to, which is perhaps the biggest shame of all . Will it shift a few units? Quite probably. Is it offering up anything particularly new or exciting? Only in places, and that’s the problem.

It’s a record which comes so close to being brilliant but somehow falls frustratingly short. Given space, direction and the right opportunities to grow creatively, SHVPES could become something really special, but in the increasingly cash and time-poor industry they find themselves in, the worry is that sink or swim has all too often become sink for equally promising bands needing similar investment. Let’s hope they prove me wrong.