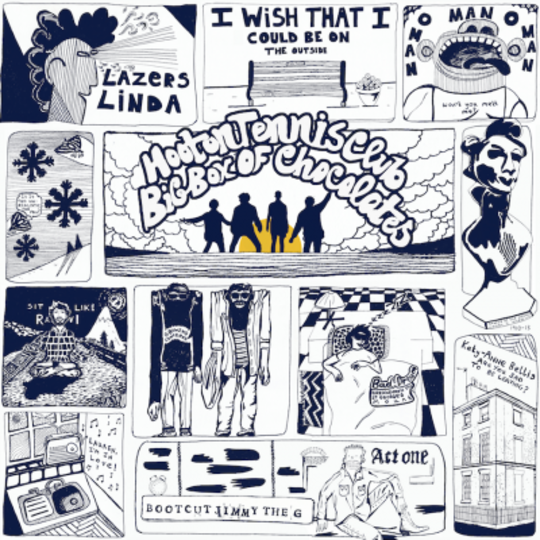 If the concept album was dead, Merseyside four-piece Hooton Tennis Club have discovered a way to resurrect it in style. Rather than focus on imaginary scientific formulas or overly complicated board games for inspiration, they'd much rather observe what's going on around them. The ins and outs of their living rooms. Literally. Fuelled by the literary stylings of Kurt Vonnegut and Henry Miller and inspired musically by a range of artists from Pavement and Guided By Voices to Lee Hazelwood and The Flying Burrito Brothers via a collective love of 'thinking man's Britpop' like Supergrass and Blur, they've managed to create one of 2016's most endearing – not to mention insatiably addictive – albums.

Whereas last year's debut Highest Point In Cliff Town hinted at the future possibilities in store, Big Box Of Chocolates represents a band at the peak of their powers.

Split into 12 individual chapters - because that's what each song on Big Box Of Chocolates feels like - its own chapter in a Miller-esque novel of vignettes. Hooton Tennis Club somehow manage to convey an array of thoughts and emotions each of us experience on a daily basis without resorting to over-sentimental schmaltz or unnecessary pseudo romanticism. Those already familiar with their previous works will know their attention to detail when focusing on a particular subject ('Jasper', 'Kathleen Sat On The Arm Of Her Favourite Chair') is paramount to their lyrical prowess. So it shouldn't come as any surprise that Big Box Of Chocolates is littered with numerous anomalies and eccentrics. Romanian mountain ranges, awkward looking people encountered at parties, former flat mates and even Lauren Laverne come under the spotlight here, and collectively it makes for a most delightful concoction of musical oddities yet one that's impossible to ignore or dismiss.

It's produced by Edwyn Collins, himself no stranger to creating timeless musical pieces out of anecdotal passages both in his Orange Juice days and as a solo artist. What Collins brings to the mix is a cleaner sound than the rawer edge Bill Ryder-Jones engineered on Big Box Of Chocolates' predecessor. What that entails is Ryan Murphy and James Madden's lyrics automatically come to the forefront. When Murphy declares "It's an animal cry!" on opener 'Growing Concerns' and a sample of a a dog barking ferociously in the background follows suit, it becomes clear from the outset Big Box Of Chocolates has a narrative of its own surroundings not that dissimilar to The Kinks Village Green Preservation Society, The Small Faces' Ogden's Nut Gone Flake or even Blur's Modern Life Is Rubbish. What's most important is every one of these characters is clearly unique to its creators yet instantly recognisable elsewhere. We've all encountered a 'Bootcut Jimmy The G' at some gathering or another. The awkward, nerdy bloke that hangs around at parties or gigs without doing or saying a great deal yet is always there. Or someone you shared a flat with throughout University like 'Katy-Anne Bellis' only for them to get a good job and move somewhere classier. Or "Uptown", as the song suggests.

It's difficult to select any one highlight in an album full of them but 'Bad Dream (Breakdown On St George's Mount)' comes close to being Big Box Of Chocolates' standout moment. Taking its cue musically from Blur's 13, James Madden's vocal is actually quite similar to Graham Coxon's on 'Coffee And TV'. The song's autobiographical style focuses about the narrator's experience at a music festival only to wish it had been a bad dream instead ("I had a bad dream about it, and now I'm stuck in my wasted ways"). Then there's 'Sit Like Ravi', a love song of sorts that sounds like John Lennon's 'Imagine' reworked by Pavement while the chorus "Make that someone happy, make that someone smile, have the time and the right things to say, to make that someone's day" strike a chord intently.

Moving further into Big Box Of Chocolates appetising assortment, 'O Man, Won't You Melt Me' could be Spiritualized's take on Mannfred Mann's classic 60s pop staple 'The Mighty Quinn' in a parallel universe. "Why would we change it all for me?" asks Murphy before adding indeceisively "I don't know what she's thinking or even what I'm thinking" over a middle eight big enough to cover their adopted city of Liverpool. 'Statue Of The Greatest Woman I know' follows suit, its title self-explanatory while Murphy's poetic asides ("You remind me of the statue of the greatest woman I know, you stand out in the rain, you stand out in the snow") collide with a jaunty melody bathed in Sixties beat pop references.

There can't be many benches in the Mollington district of Cheshire to have songs written about them but that's exactly what 'Meet Me At The Molly Bench' is. Its story and main refrain ("I wish I could be on the outside") simply telling the tale of cycling between Murphy and Madden's parents houses into the countryside as teenagers, demonstrating there's often beauty in the banal. 'Lauren I'm In Love', again paying homage musically to Merseyside's famous glories of the past acts as a part tongue in cheek, part fanboy crush paean to former Kenickie star cum radio DJ Lauren Laverne ("She makes my day"). And the reflective 'Frostbitten in Fen Ditton' shows Hooton Tennis Club at their most pensive, if not quite downbeat ("Is it too unrealistic for you?") over a melody Stephen Malkmus would be proud to call his own.

Better still is the powerpop punk of 'Lazers Linda', a song that bounces around dizzily like a child in a sweet shop for two-and-a-half minutes before collapsing in a fit of excitement at its finale. The album is brought to a close by the title track, a summary of sorts about what's gone on before that erupts in a monumental instrumental breakdown for its final two minutes as Big Box Of Chocolates closes its lid one last time. As kitchen sink dramas go, this is the perfect soundtrack.