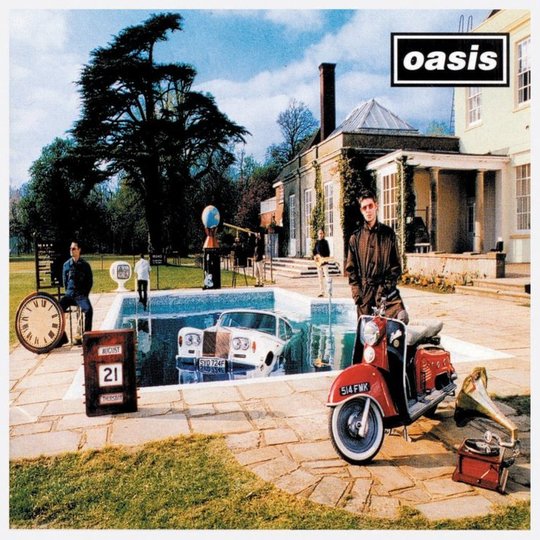 A lot has been said - not least by Oasis themselves - about why the Mancunian titans' third album Be Here Now went so 'wrong'.

It is, for sure, a less good album than Definitely Maybe and (What's the Story) Morning Glory, being in large part the sound of a band who'd made their name writing three-to-four-minute-long indie rock songs now trying to write seven-to-nine-minute-long indie rock songs, with indie-rock not being a genre especially supportive of that sort of length, especially from a group that were hardly virtuoso musicians. It also mostly lacks the aspirational rock'n'roll swagger that had defined their early work.

The obvious exception to both these rules was the awesome lead single 'D'You Know What I Mean?', on which the gargantuan running time was justified by the fantastically bombastic deployment of FX - morse code! Backwards vocals! - and lyrics that (insofar as they meant anything) seemed to exist as monument to the scale of the band's success ("all my people right here right now, d'you know what I mean?" - millions of people did). But it's the peak of the album by a long shot, and the generally accepted wisdom is that fame and its attendant drugs had buggered up songwriter Noel Gallagher’s muse.

But in many ways the absolute last thing that you should really blame Be Here Now's 'failure' on is the efforts of the musicians involved. Essentially Oasis turned in a third album less good than their first two albums. It may have been a disappointment, but if they hadn’t been so outlandishly massive it wouldn’t have been that a big deal. But Oasis had sold 5m copies of Morning Glory, and a substantial enough portion of the nation felt so invested in a third Oasis record being good that it convinced itself it was a masterpiece. Pretty much everyone was complicit: in the pre-digital era, music hacks who'd had weeks to listen to the record bestowed top marks upon it, almost across the board. When the 'D'You Know What I Mean?' single arrived at Radio One, it wasn't just played hourly - its B-sides were played hourly. National newspapers ran endless articles on the band, earnestly attempting to 'decode' the cover art as if there was some great hidden meaning. And while the public may or may not have been been given helping push into making it the fastest-selling album of all time (until last year), from what I observed of school friends' reactions, people seemed to love the record for a good few weeks, maybe months, before they realised they might not be playing it quite as much as its predecessors. Eventually the backlash emerged and the record was written off, but it gave people genuine pleasure for a summer, at least.

Though they would continue for another 12 years, Be Here Now essentially broke Oasis. While Pulp and Blur ran away from their Britpop-era success, Oasis never stopped trying to appease the multitudes that had bought their first two records. Though they would continue to be a big band, they would effectively become a nostalgia act from this point on - at their last ever gig, 12 of the 19 songs played were from the first two records and accompanying b-sides.

Nowadays this all feels like a distant tale from another age, and it should be easier to listen to the record with something like objectivity. But the truth is that it's hard to imagine it being made by a band not in their weird, impossible position. 'D'You Know What I Mean?' opens it in bombastically brilliant fashion. 'All Around the World' closes it interminably, a Beatles-y plodder far far far too enamoured of its expensive, cokey orchestra. In between there are definite moments, but the preponderance of very long songs makes it a slog to this day. That all accepted, it’s not like Noel had totally lost it: if you liked the early stuff, there’s no real reason why you’d have a problem with ‘Stand By Me’, ‘Don’t Go Away’, ‘The Girl in the Dirty Shirt’ et al, they just lack the romance of the early stuff.

This three-disc anniversary reissue feels almost more like a time capsule than an essential listen, but that’s no bad thing. Disc two contains the b-sides to the singles and offer an interesting parallel history: there’s a clutch of scuzzy rockers in a Definitely Maybe mould, and ‘Stay Young’ – b-side to ‘D’You Know What I Mean?’ – is a quintessential Oasis anthem (perhaps almost parodically so) that might have shored up Be Here Now it if had been included on it, but probably feels a touch out of place, all things said. It’s the best thing on here by some way, though acoustic Noel takes on the Beatles’ ‘Help!’ and his Chemical Bros smash ‘Setting Sun’ are very pleasant. It ends with the most intriguing moment on the record: ‘D’You Know What I Mean? (NG’s 2016 Rethink)’ is a Gallagher remix of the record's best moment that sleekens it up by stripping out some of the more preposterous bits (the helicopter noise at the start) while holding on to its fundamentals. In a way it’s a shame that Noel has done this for the song that needs it the least – a complete overhaul of the record with the benefit of hindsight would have been fascinating, albeit a pretty weird use of Noel’s time considering his solo career is going pretty well.

Disc three is Noel’s never-before-heard Mustique Demos, which are of relatively limited interest: it’s reasonably lo-fi takes on a smattering of the songs sans Liam, but they don’t provide any sort of revelation – these were not masterpieces killed by studio trickery.

It'll be fascinating to see if the Oasis reissues series continues beyond Be Here Now. Maybe it’s simply profitable to flog this stuff to the nation’s dads, but I like to see it as a historical document, the closing of the chapter that marked Oasis’s time as national obsession. Oasis (the band) would continue, but Oasis (the legend) died with this album.