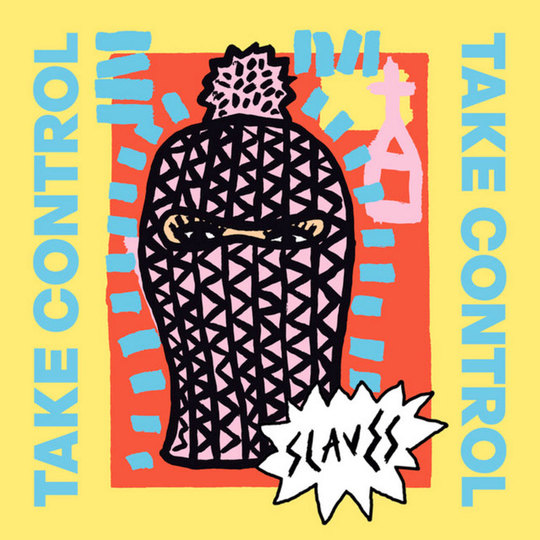 Let’s start out by saying I find a lot of the anger around Slaves more than baffling. Maybe it’s just my own little Twitter echo chamber but it seemed a great number of people found quite a lot to dislike about the thrilling, though admittedly somewhat basic and raw, debut from the duo. A Mercury nomination probably didn’t help matters but people appeared extra keen to stick the boot in with this particular example. If you can’t find some joy in the tongue-in-cheek nature of that record then have a word.

The question is, does Take Control see Slaves continue along that path or evolve into something else? Opener and lead single ‘Spit it Out’ comes across as an extension of that first album with chugging riffs, simplistic lyrics and a basic punk sound. And that’s fine. If you liked Slaves the first time around, it was enough to draw you back in. It sounded fucking beastly at Leeds Festival.

Where from there? ‘Hypnotised’ is played with a heavier tone but largely follows that same formula. It’s still giddily dumb but reinvents little. Far more interesting is ‘Consume or Be Consumed’. It features Mike D from the Beastie Boys (also on producing duties) and the rapping from both him and Isaac here makes it one of the most interesting tracks on the album and that they’ve given us so far. Their exceptional cover of ‘Shutdown’ in the Live Lounge hinted that they had this in the locker so it’s great to see shades of it come forward on a record. It’s a shame it’s followed by 'Take Control' which mimics their own song ‘Where’s Your Car Debbie?’ too much even for them. The chorus is cathartic but doesn’t save it.

'Rich Man' actually sounds pretty smooth and screams out as the single most likely to have a mainstream appeal. Lyrics go: “Two sides to the coin in his hand, he’s got a big house and a shitoad of land” with delightful sneer. Expect to hear it a lot in the near future (I’d be shocked if they went with something else). ‘Play Dead’ then thunders along like a punky Pantera and the one-two hit of these tracks shows that the band are more than the one-trick pony act they might sometimes be perceived and portrayed as.

‘Lies’ again drives home the fact that anyone coming here expecting no variety is going to be disappointed. Laurie, never an awful guitarist for sure but also far from a show-off, displays a much wider array of skills across the record as a whole and that’s never truer than in this track and the two proceeding it. ‘Fuck The Hi Hat’ is as chaotic as it sounds and equally fun. We’re back on the idea of dumb fun and even though they’re mixing it up slightly that sticks around.

‘The People That You Meet’ aims at Mike D: “production is his game, he called my friend Laurie, he used to be a Beastie Boy but now he works for me.” You can’t help but smile. That ‘Steer Clear’ then comes in with an electric drumbeat, harmonics and a spoken word performance is astounding. The verses are transfixing and the synth over the chorus is gorgeous. It’s the last thing I saw coming and it works a charm. It actually sounds like Metronomy. Weird.

Equally baffling is that they appear to successfully channel Josh Homme on ‘Cold Hard Floor’. Not in an Alex Turner way, this still sounds as snotty as every Slaves tune, but it’s borderline sexy too. Again, weird. It’s going to prove some doubters wrong but it’s almost reassuring when ‘Same Again’ closes the album in what can only be called traditional style.

Slaves confound expectations here but is that enough? The album is bookended by tracks that could be on that first album with a creamy, scummy centre of songs that show there’s more to them than meets the ear. It might even change your mind about them. It’s still simplistic and limited but it’s meant to be. That’s the whole idea. The converted will remain.