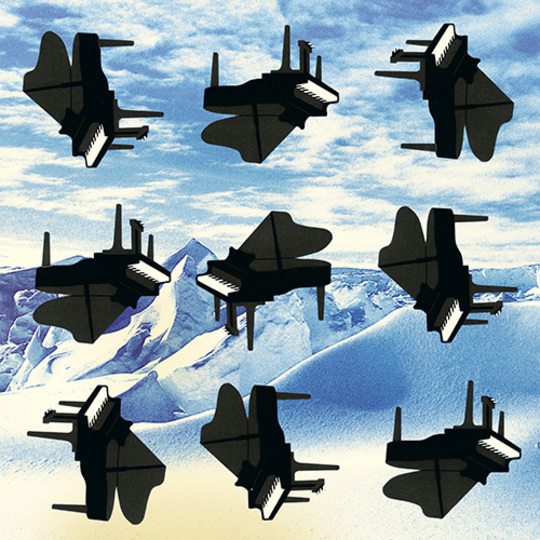 On top of the unmistakable, powerful, and eclectic dance floor groove of Hot Chip, sits the soulful melancholic voice of Alexis Taylor, who gives them their pop identity. He's an irrepressible creative force: there are the six albums he's crafted with Hot Chip, and the three he's put out with About Group. So far under his name he's released an EP, and the album, Await Barbarians.

On that latest solo release, it was more stripped back than anything Hot Chip’s done. But, the myriad instrumentation around his voice, coloured things, and took the songs away from the core. Subsequently, it bent more towards what you would expect a Hot Chip side project to be.

Piano, on the other hand, sounds as if he's gone: 'Fuck it; I'm making my definitive piano album.' New songs, old songs, and covers in are in there in stark, introverted, and desolate fashion. So, if you're after party bangers like 'Over and Over' - you might as well stop reading here.

Part of the intimacy of this set, is largely down to the way he's chosen to record it. What Taylor's gone for is a sound that acts as very accurate representation of what it would have been like to be listening to Taylor in the studio. With Hackney Studios engineer Shuta Shinota at the controls, they simply let a great sounding piano, Taylor's voice, a quality desk, and the soft hum of a tape machine rolling in the background do all the work.

But, the intimacy, and great quality recording wouldn't matter, if there were no meditations on universally emotive matters there for the listener to chew on. Fortunately, they're on there in abundance. Opening track, 'I'm Ready', is the lead single that the label, Moshi Moshi, has been using to promote the album. It's a chilling rendition of a previously unrecorded song and it's a one that would knock the restlessness out of a room, and create awe among the listeners. But, the overarching subject matter of loss doesn't quite kick in until the second track, 'So Much Further To Go' - a reworking of the Hot Chip song from the album, Why Make Sense, kicks in. There's a line in it: ''Life a miracle - a miracle that's hard to bear," that has taken on a renewed significance for Taylor. The press release reveals why. He explains that he lost a close friend during the recording of this album and the lyrics didn't have too much of a bold meaning to him when he wrote them, now his mournful feelings are conveyed closely.

Although the cover of Elvis' gospel track, 'Crying in the Chapel', is more positivist, lyrically, the sad tone and stark arrangement put it in keeping with the rest of the set. Importantly, justice is given to the King, and Taylor, fortunately, doesn't get sidetracked by any temptation to imitate his voice, and makes it very much his own.

On, 'Without Your Name', the imperfections, and the unedited organic quality of the record comes through strongest. Notes appear to stumble occasionally, and the dynamic uncompressed sound of the piano comes out vibrantly. It's refreshing to hear something that hasn't been flattened - especially on an emotionally vulnerable set like this.

Another cover, 'Lonely Vagabond', comes across like a classic. It's a wistful, hauntingly beautiful interpretation of a Lone Pigeon's original. The two versions aren't too dissimilar in mood, as this track is the most heavily piano-based track on the stunning Lone Pigeon album, Schoozzzmmii. This is valuable exposure to this obscure record, and shows why, Piano, beyond being a fine album in its own right, also offers a musical education for the listener beyond Taylor's own output.

Elsewhere, 'Repair Man', continues the emotionally bleak ride. The helpless lyrics: "I started my life over again as a repair man / whose hands do not work " imply the gist of the narrative that follows. Next up, Alexis Taylor hits on another American classic with Crystal Gayle's 'Don't Make My Brown Eyes Blue'. The sparse piano playing - which characterises a lot of the album - ushers the words to the front and the song fits within the theme of the set just right.

In a similar country style, comes the Taylor original, 'I Never Lock That Door'. It's got all the hallmarks of a classic country love song and shows that life as a broad listener has paid off, in that it comes so naturally to him. After a brief flirtation with more upbeat words, 'Just for a Little While', comes in with more devastating lyrics. "Just for a little while / I want to see your smile" is something anyone struggling with the absence of a loved one can relate with.

Similarly, 'Don't Worry' is a murky portrayal of loss. "If I am gone away / don’t worry / It is only forever / If I have lost all that once mattered / don’t worry / it's only shatters / If I look you in the eye and my eye forces yours away / Don’t worry" are among the most direct lyrics on the album.

To cap things off, there's an untitled track that feels distinct from the rest of the album, it's recorded in a pre-war style and sees a guitar gently plucked next to Taylor's voice. It's a charming end to a stunning, yet intense emotional ride that Piano takes you on.