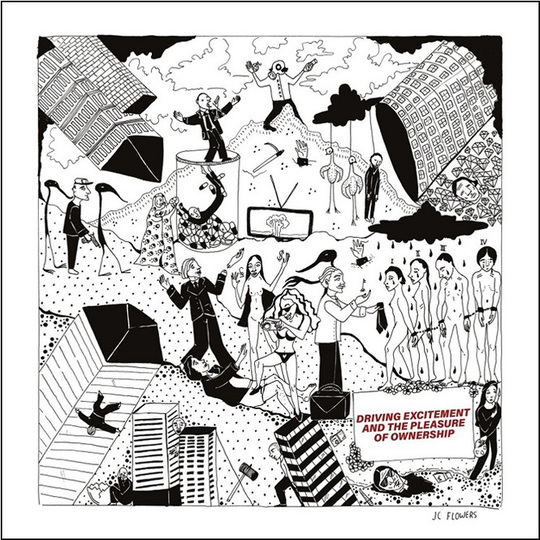 Hailing from the same London scene as the likes of Charles Howl, Ultimate Painting, Toy and The Proper Ornaments while featuring a member of Novella in their ranks, it's no surprise to learn JC Flowers take much of their inspiration from the past. Which of course, is never a bad thing. It's how those influences are channeled that really matters, and when they strike gold Driving Excitement And The Pleasure Of Ownership delivers impeccable results.

Written and recorded in the summer of 2014 at The Moriaki Skyway in London's Canary Wharf, Driving Excitement And The Pleasure Of Ownership captures JC Flowers in both playful and self-indulgent modes. And while the latter can be a bit too heavy on the eardrum in places, the former is where they hit their stride and occasionally step out of their comfort zone.

Take 'Spent' for example, which takes the dream pop template in its most primitive format like 'Strawberry Wine'-era My Bloody Valentine or a less effects heavy Ride. Melodically structured to a tee, Isabel Spurgeon and Edgar Smith's harmonies glide fluently over the top in a similar way to Kevin Shields and Bilinda Butcher only less noise afflicted. Likewise 'Dust Planet', which features The Voyeurs' Sam Davies on guitar. Taking the form of a sensual lament where once more, Spurgeon and Smith's harmonising proves key.

Welsh guitarist Noel Anderson's homage to his hometown 'Ym Mhorthcawl' has a Stereolab feel about it, albeit in a mellow context, while the self-reverential 'JC Flowers' relies on more interplay between the two vocalists, Spurgeon at one point declaring "You're already dead!" in an evocative tone that could haunt a morgue in broad daylight.

Punctuated at regular intervals by a series of interludes, named 'Jazz Hole' and numbered 'I' to 'IV'. Named after the club where Bleeding Gums Murphy plays in The Simpsons, each of the four pieces only range from thirty to eighty seconds in length so don't outstay their welcome as such, but at times tend to distract from rather than enhance the album's fluency.

Driving Excitement And The Pleasure Of Ownership reaches its conclusion by way of an easy listening, lounge style cover of Iggy Pop's 'China Girl', which is actually much better than it has any right to be. Although by no means a bad record, Driving Excitement And The Pleasure Of Ownership would probably work better whittled down into a pair of EPs rather than a whole album. Nevertheless, the potential of its creators is there for all to see, and bearing that in mind, we look forward to what JC Flowers have in their lockers next.