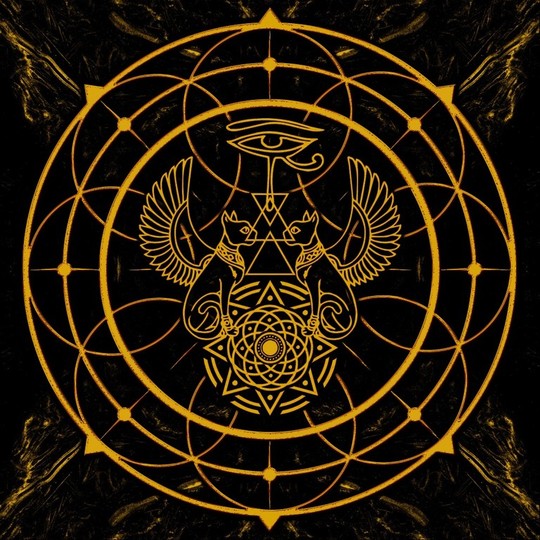 If you believed the hieroglyphs painted above the tombs of pharaohs, the sun dies every day after dipping below the horizon. To revive himself, the almighty god Re must race through the underworld, past knife-wielding cats and fire-breathing serpents, until the night goddess Nut reincarnates him as a disc to rise again in the morning sky.

Now, Seven Davis Jr. hasn’t battled any razor-toting felines that I know of. But he did reincarnate last year into an archetypal hero of interstellar origin, offering love and dance to the masses before beaming back to the heavens. Rich with life-affirming groove, his second album Universes infused electro, house, and funk with the delirious medicine of witch doctors and jackal-headed embalmers. For Dancing on the Sun, though, the Seven mostly withholds his cosmic power from the earthly denizens, searching instead for the eternal. It’s not clear what he seeks – and it’s sad to feel left behind - but the journey plays out like Re’s nightly underworld race: surreal, yet doomed to repeat itself.

Granted, we could riff off this Egyptian imagery all day, but when presented with any new SDJR record of late, what matters is – yeah, but can you dance to it? For that is the key source of Seven’s power, even more than his interstellar enigma (as previous single Wild Hearts proved); his ear for club-worthy anthems that unite folks on the dance floor aligns him more with fellow Californian The Egyptian Lover than otherworldly prophets like Sun Ra. In that light, 'Dancing on the Sun' stands apart from SDJR’s usual breakout singles – it’s not so much a song as a template, a haze of buckling bass and shuffling beat that phase in and out under the titular incantation. Six minutes stretch into twelve, 18, an hour, an incalculable vacuum that holds the bobbing head in thrall, but doesn’t excite the feet on its own. Uncharted by verses or melody, 'Dancing' instead encourages DJs to jump in – Seven himself opens the floodgates with his sneaky house remix 'I See The Light'.

It’s a mesmeric experiment, for sure – but for the fans tapping their feet on the sidelines, 'Church' is the place. SDJR returns as space age messiah here, mashing the chrome-slick curves of deep house with gloopy electro synths to rally the disillusioned back to the pulpit: “Where did the love go? / What happened to the soul? / Something’s wrong with it” . In spite of the intended epiphany, though, 'Church' sounds somewhat stilted; Seven buries his suave self deeper in the mix than before, which snuffs some of his charisma.

On the opposite end of the vibe spectrum lies 'Spliffs'. Lyrically, it’s SDJR’s laziest and most selfish writing to date – he’s basically just acknowledging how high he is – but the woozy, smoky dub that shambles underneath mirrors those words perfectly. Like pacifist paean 'Fighters', 'Spliffs' unifies those infinite snare hits with his own brand of jazz fusion, warped into molasses form. The end result is quite brilliant, even if the words amount to nothing revelatory.

Indeed, the most substantial lyrics were reserved for the bonus version of 'Dancing', via the original version of the titular track. SDJR doesn’t sing them, either – the honour there goes to Yazmin Moret Watkins, who charges through the centre aisle while Seven straddles the wall. Her sharp and witty monologue glorifies the devotion that audiophiles attach to music and conflates it with personal affection, thus snatching the mantle of Love from Seven and running with it. One wonders why he opted for the blank slate version of “Dancing” for the physical release rather than its weighty double – but then, the instrumental would be easier to proliferate ‘round the clubs, wouldn’t it?

All in all, SDJR doesn’t quite match the Egyptian finery that adorns Dancing on the Sun. While the cyclical single could drone indefinitely in yr eardrums, and the B-sides do impress, Seven hasn’t advanced to any higher plane yet. If he does indeed seek the immortality of Re, he’ll have to dig deeper underground.