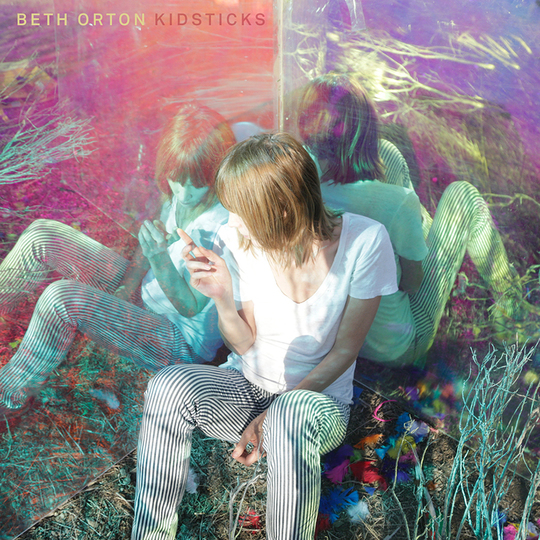 “I see a light, ain't it bright? Keeps me up all night”. Not the most revolutionary of lyrical manoeuvres to undertake as the main vocal hook on the track which re-announces you to the listening public at large, but by the time Beth Orton breathily essays the trio of lines in the chorus of 'Moon', all notions of what we might expect from her in 2016 have already been blown summarily, even somewhat rudely, out of the water. Kidsticks falls somewhere between School of Seven Bells at their most plaintive and, conversely, St. Vincent at her most direct. This should immediately indicate that something of a re-invention has taken place in Orton's modus operandi. Allied with the production of Andrew Hung of Fuck Buttons, her distinctive vocal has returned to its roots, roots which were put down through collaborations with William Orbit, Andrew Weatherall and Kieran Hebden, as well as with the criminally underrated Red Snapper. Most listeners might well know Orton best from her ultra-intelligent folk music, but as Kidsticks attests, she is equally at home, if not more-so, in the electronic arena.

And how. By the climax of 'Snow', where she intones, over and over, “you are all aglow”, I'd defy you not to be nodding along in agreement, regardless of whether you know what she means. The feeling of joyful wonderment never really seems to let up. As “my tears well up and cry for you” in the outro of 'Petals', a song that in Orton's old guise could have slipped away almost unnoticed becomes a shuddering mass of emotional noise. The drums of Guillermo E. Brown and guitar of Twin Shadow's George Lewis Jr. sweep in on waves of cacophonous yet controlled passion. It shows a tremendous widening in the potential of Orton's range and ability to communicate. Her songs would still work in the hands of an acoustic-toting singer-songwriter but their potency is increased myriad times in these musical surroundings.

'1973' is a bright and breezy, short and sharp pop song. Grizzly Bear's Chris Taylor augments 'Wave' with some tasty backing vocal inflexions. The song, again, is a light, almost airy composition. As its 6/8 rolls along, the mix is filled in the mid and higher ranges with synth leads and sweeps which pop in and out to exceedingly pleasing effect. Happily, the chorus “I was crying out for you, before I ever knew, crying out to you, breathe me in” remains the central focus throughout, as the benefit of the vocal recording of Alain Johanes and mixing of David Wrench come to the fore once again. It might seem strange to comment on vocal recorders and mixers, but each track here features subtle changes in the placing of Orton's voice to best give it the tone and colour it needs, in attention to detail which some albums of this type often seem to lack.

As a case in point, 'Dawnstar' has Beth in a more distant, yet more resonant place, as the string arrangements of Dustin O'Halloran (A Winged Victory For the Sullen) make their first incursion. This is a downtempo number, yet with a richly full sonic palette. 'Falling' raises the tempo once again, taking us back into a lighter, seemingly jauntier place. 'Courdroy Legs' is the album's most experimental moment, as an almost spoken Orton vocal fades into the background behind a bed of synths, out of which some beautiful piano from O'Halloran emerges. 'Flesh and Blood' follows, a more strident, up-tempo number, as the pulsing bass of Bram Inscore comes to the fore. As the instrumental closing title-track fades from view it feels like we've seen another, if not new side to Beth Orton and her work, a side which will be new to many.

At times Kidsticks feels a little uneven. Tempos and timbres shift regularly, never allowing the listener to truly settle into one mode, or gain a true sense of what is the coherent sonic voice at the heart of the album. That is, apart from Orton's voice itself, which has never sounded better or more in control. If this is the shape of things to come for her, then we could be in for quite a treat. If only more musicians would be brave enough to truly re-invent themselves.