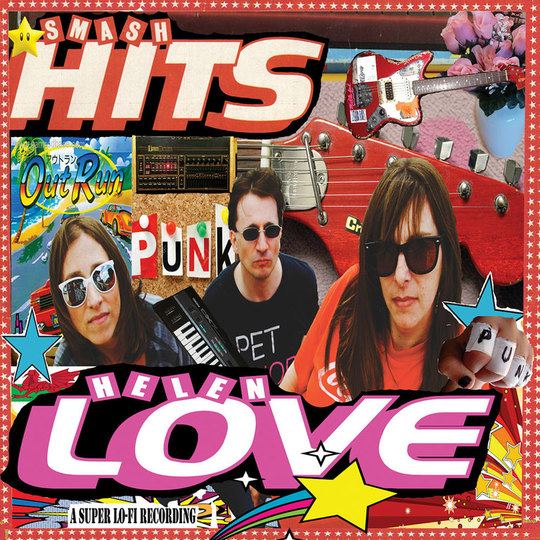 Helen Love have been a bit hit and miss at the best of times throughout their 22-years-and-counting career, and although the hits have been very 'hit' indeed and far outweighed the misses, they’ve always had a general sense of being a bit all over the shop. This eighth album, however, entitled Smash Hits, is the most coherent they’ve ever sounded, and it makes for a satisfying listen.

It’s not that all the songs on Smash Hits are the same - it’s more that each track feels completely together, and the album feels together as a result. Where previously the ingredients that make up Helen Love seemed to be pulling oppositionally at various musical limbs in a strange sort of sonic tug of war, on Smash Hits they come together like they’ve always felt like they could. Where previously they’ve had indie songs, disco songs, bubblegum pop songs etc, everything on Smash Hits is a indie disco bubblegum pop hit.

Of course, coherence was never what Helen Love were 'for'. Their previous erraticness, it could well be argued, was what made them who they are, and far be it from me to journosplain eight albums in that Helen Love are in fact brilliant to a world of fans who’ve known that all along. For what it’s worth though, they are indeed brilliant, and this newfound sense of coherence doesn’t remotely feel like anything lost; indeed, while that former sense of DIY we-don’t-know-what-we’re-doing-either youthfulness would’ve felt artificial if they’d tried to maintain it when they’ve obviously, naturally, grown up a bit.

And the result is fun as fuck. It’s a brilliant, unpretentious pop album packed with pop culture references that blares in a neon rainbow, with extra large doses of pink and green, and full of infectious joy from the get go. It’s impossible not to get swept up in the euphoria of Helen singing “I feel like the first girl from Wales in New York City”, and when she and the band sing “Yes we’re in a band that we love” together, you can’t help but love them with them as you sing along with a grin to match theirs that you hear.

Various samples of things they love are used abundantly too, with hardly a sense of a single one being extraneous, with the possible exception of the constant Ghostbusters references on ‘You Can’t Beat A Boy Who Loves The Ramones’ (it just feels a bit weird to be yelling “Ghostbusters” so much when the chorus goes “Who you gonna call when you’re feeling sad?...It’s not the GHOSTBUSTERS!, it’s the Ramones”). Mainly though, every quote feels like a celebration of something they love, and an invitation to the audience to celebrate it too. ‘Thank You Poly Styrene’ is exactly what it sounds like it would be: an ego-free celebration of one of their heroes. They’re great at weaving pop culture into their songs as a framework for expressing themselves too - see ‘Shiela B. Devotion’: “Tonight I’ll be your starspacer, like Sheila B. Devotion / If you say you love me, then I’ll second that emotion”, one of many expressions of youthful joy and unabashed indie-love.

The best part is, this maintained youthfulness doesn’t feel like it clashes with their relatively new sense of maturity; rather, their songs about being a teenager with a case of the feels (as when Helen sings “I’m in love with the Belle of St Mark / And if he doesn’t love me, I think I’ll probably die”) feel like an ode to growing up.