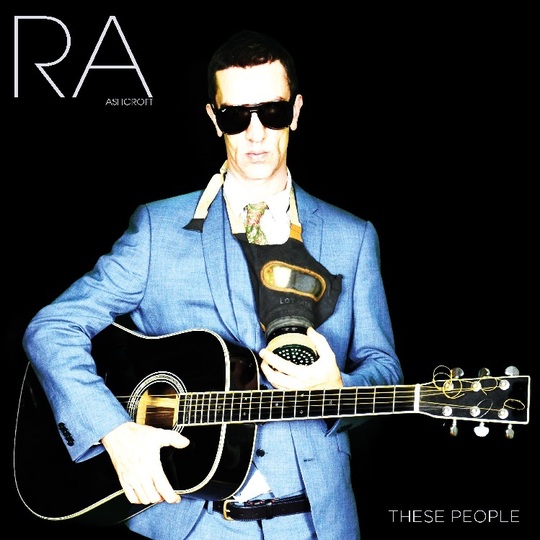 Richard Ashcroft dropped off the radar after he finished touring his last solo album, and if you’d put your name to something as horribly ill-advised as United Nations of Sound, you probably would’ve done likewise. That album saw him try to inject something new into the standard template that his previous three solo records had followed, but the inescapable truth about Ashcroft’s own output is that said template is so uncompromisingly rigid that he could probably scream some misanthropic death metal vitriol into the microphone and it’d still come out of the speakers, in that unmistakable Urban Hymns croon, as “hey, hey, everybody, all the people now, come on, yeah”.

It’s for precisely that reason that a few cynical eyebrows were raised at the news that, with this comeback LP, Ashcroft had been spurred to emerge from semi-retirement by a burning desire to channel some of his bewilderment and anger at the state of the world we’re living in into a new batch of songs. Topicality does not seem like something that would sit comfortably with his standard approach to songwriting; his finest moments have always thematically been born out of romance, the everyday, or some combination of the two. Add to that the fact that he is not a man known for delivering his messages in anything approaching a nuanced fashion, and it’s initially difficult to envision the very ideas behind These People actually suiting him.

Not that that was ever likely to stop him; he’s only given a handful of interviews in support of this release, but they’ve all suggested that his appetite for bravado and his stratospheric level of self-regard remain intact. Even in his chat with John Doran for Noisey, in which the Quietus man did a sterling job of opening the usually po-faced singer up with questions about the scarcity of gravy-serving London chippies, Ashcroft still managed to shoehorn in the ludicrous assertion that Urban Hymns was effectively a solo project. Given that The Verve’s 2008 reunion album Forth, which chronologically came between Ashcroft’s turgid Keys to the World and the catastrophic United Nations of Sound, was actually a perfectly passable addition to the band’s laudable back catalogue suggests that Ashcroft can ill-afford to be so casually dismissive of his former bandmates, Nick McCabe in particular.

Funnily enough, These People actually does see him working with Wil Malone, who lends orchestration, just as he did on A Northern Soul, Urban Hymns and Ashcroft’s solo debut, Alone with Everybody. Perhaps this is why Ashcroft felt moved, in an interview with NME, to claim that opener ‘Out of My Body’ is cut from the same cloth as ‘A Song for the Lovers’ and ‘Bitter Sweet Symphony’. In fact, the strings on it are largely suffocated by comically outdated synths and a weak, barely-there beat. It kind of sets the tone for a lot of what’s to come, though; there’s a whole slew of tracks on which the guitar is eschewed and replaced by really uninspiring electronic backdrops that are then arbitrarily augmented by Malone’s arrangements; ‘Hold On’ is a case in point (no, I can’t believe he’s never previously named a song that, either), as is the meandering ‘Everybody Needs Somebody to Hurt’.

The closest he gets here to producing anything that might come close to standing alongside his best work is when he just unabashedly goes down the predictable route; ‘Black Lines’ is a bare-faced shot at recapturing The Verve at their most commercially viable, with guitars that are oh-so-Nineties ringing out and another benign, but ultimately uninspiring bit of orchestral backing from Malone. ‘Picture of You’, too, strikes for similar territory. It’s when you realise that ‘This Is How It Feels’ - the album’s deeply average lead single - is actually about as good as These People gets that you start to wonder how Ashcroft managed to fall this far. Only the most blinkered fan would make any case for Alone with Everybody, Human Conditions or Keys to the World being classics, but at least they all showed flashes of two things - urgency and ambition. These People has neither. Human Conditions was slagged to high heaven when it came out, but that sprawling opening track, ‘Check the Meaning’, at least conveyed Ashcroft’s appetite for drama on a level beyond a heavily-sedated string section. ‘Break the Night with Colour’, off of Keys to the World, brought that ear for melody into sharp focus, even if the rest of the record didn’t. It’s hard to imagine even the most dyed-in-the-wool supporter showing up to a gig and saying, “fuck, I really hope he does ‘They Don’t Own Me’ tonight.” There’s nothing on These People to inspire anything like that level of interest, let alone dedication.

There should, of course, be a ‘but’ here. After all, everything Ashcroft’s said in the lead-up to this release has suggested that this is an incisive collection of effectively political songs, that try to make sense of the awful mess we’re presently in. You have to remember that there’s probably plenty of people who’ll buy this record who haven’t read either the label spiel or any of the press behind it, but even they should have an inkling of what to expect; the front cover offers myriad clues. Ashcroft appears on it near-shaven headed, which might just have been a measure to make sure nobody recognised him on the street post-United Nations of Sound, but we’ll assume instead it was part of the image he appears to be trying to cultivate here, which is borderline militant; he has a gas mask hanging around his neck, and holds his acoustic guitar like he’s just cocked it. Here he is, Sergeant Ashcroft, ready to wade into battle to protect us, “the people, yeah, woooahhh, soul power, alright”.

There is a bluntness to Ashcroft’s best songwriting that you can pick out of all of his finest efforts; ‘Bitter Sweet Symphony’s unflinching lyrics are a major reason why, as the man himself astutely observed, it really is the best song that Mick Jagger and Keith Richards have written since ‘Brown Sugar’. Similarly, ‘Lucky Man’ is just so beautiful and earnest and unguarded, and so’s ‘Sonnet’, for that matter, and then there’s ‘The Drugs Don’t Work’, which forces you to sit up and listen by way of a punch in the gut. It’s not unreasonable to think that maybe, if that directness was translated to the burning issues of the day, Ashcroft could possibly be a halfway decent political songwriter. That’s certainly what all of the noise around These People seems to have suggested he was driving at, this time around. And it’s also why I was so agog to hear ten tracks that simply spun the same platitudes of old.

There’s no commentary here, social or otherwise. It’s just Ashcroft on the same lyrical autopilot he settled into on Alone with Everybody and only ever seemed to break out of - albeit sporadically - on Forth. 'Over the period I wrote this record, we’ve lived through incredible times,' he told NME in February. 'Highly contentious wars were going into the pot; grassroots movements turning into semi-revolutions; Tahrir Square. It was kicking off all over the globe, people being divided. Pepper spray everywhere, tear gas.' God knows, you’d never guess based on the characteristic vagueness of the words he’s written for this album, and for him to bring these issues up in an interview seems really disingenuous. He talks plenty on These People. He says practically nothing.

The whole story behind this album just doesn’t stack up once you’ve heard it. Ashcroft is one of the great British musical icons of the Nineties, and quite rightly too - A Storm in Heaven and Urban Hymns, particularly, will always have a cherished place in my record collection. But the narrative we’re being peddled here - that he’s back, finally, to set this uncertain world of ours to rights - is not reflected either in the badly dated sound of the record or the non-committal words that accompany it. Perhaps the worst crime is that Ashcroft never even gives that wonderfully expressive voice of his a proper workout; he hasn’t written anything here that demands he really go for it. Instead, These People is an album that’s so safe, it’s almost dangerous; even his most fervent fans, the ones who loved Human Conditions and Keys to the World, are surely going to pick this one up and think, 'fucking hell, this is a bit middle of the road'.