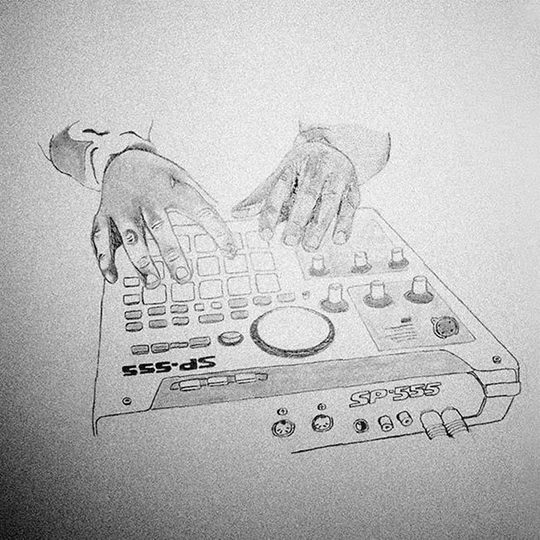 Sporting Life aka Eric Adiele aka one-third of Ratking has written a 30-minute love letter to his Roland SP-555 and, although probably not consciously, the resultant record also sounds like a lover letter to the defunct Leeds via Arizona lo-fi label 555 Records (although now gloriously re-imagined and Emotional Response records).

There’s two immediate responses to 55 5's. Firstly, that this is a bit of a hotchpotch of backing tracks and secondly, where are Ratking rappers Wiki and Hak to make this sound fresh and give it focus?

But it’s the response after the knee jerk that’s most useful. Give Sporting Life his space and play this a few times, scope it out.

Yup, across the ten tracks this is still definitely a hotchpotch however you cut it, but it’s not a bad one. Not at all. There are elements of Ratking’s psychedelic production embedded deeply into this but this is far more subtle than their bravado-fuelled beats. This sounds more like Huon and Cex than Cloud Rap.

Take ‘Badd’ for example. Granted, it’s got that woozy Cloud Rap vibe in the vocals as monosyllabic notes edit into and through each other but the resultant melody churns sumptuously. Like when Jay-Z took all the Broadway samples back in the day and fucked with the pitching - but these are edited into something lush, not just a novelty backing track from which to talk game. As a tinny snare rattles out there are flashes of Hood’s more frantic sonic adventures, or even something Flying Saucer Attack might detonate. This is a musical TTIP you can get behind.

Clearly the tunes are approached as compositions: this isn’t purely an extended series of snippets as Sporting Life has a jolly on the SP-555 (or maybe it is). ‘Triple-Double No Assists’ (we’d want blocks, not steals) pumps out the electro-toms with such a Warp/Richard D. James/Rephlex tone and rattles out the rave percussion so sincerely that it’s like welcoming home a sibling who’s been living abroad for years. Yet before the drums snap in, a piano edit plays out in a melancholy fashion and plucked violins punctuate in a seemingly random fashion. This has depth, this has style, it just sounds a bit binary at first.

‘A.I Style’ even has a RatKing pulse behind it with more low end in the SP and more pop to the snare. It’s a bit of an infinite loop but it morphs and staggers nicely whereas ‘Pre-Order The Dope’ is a musical flow moment, Sporting Life turned slave to the groove and everything is softly focussed, undefined and welcoming.

While this is a teaser before a proper full-length in 2016, this is a fucking good teaser, and certainly one worth spending some time with. It’s a space, a place, somewhere to go that’s different.